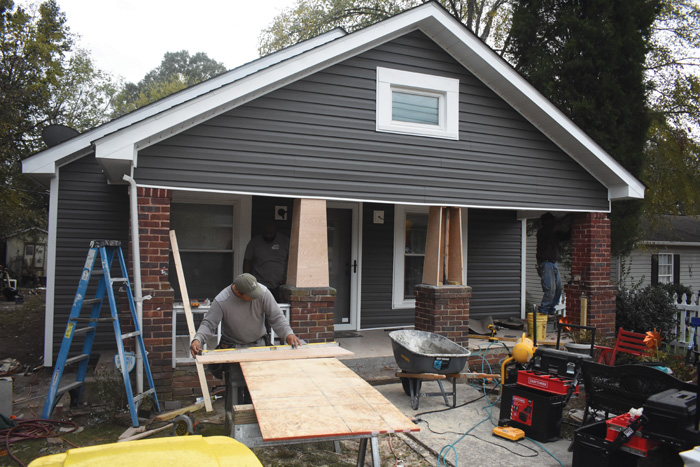 Work goes on at Cynthia Neely's house on Old Wilkesboro Road. / The Housing Revitalization and Rehabilitation Program is offering grants to repair the exterior of homes in the West End. / Zach Stevenson / Salisbury Post

SALISBURY — After a slow start, the West End Housing Revitalization and Rehabilitation Program has began transforming the exterior of five houses.

Cynthia Neely, who lives on Old Wilkesboro Road, was one of the first to apply for the lien program to get a new roof, a wider door frame and door, columns and siding. Neely said she attended a July 31 information session about the program and instantly wanted to participate.

“I was going to start doing cartwheels,” Neely said.

But the West End program wasn’t received well by all. Some residents had concerns about the conditions of the lien, including what would happen if they died or wanted to sell their house.

Under the program, owners can receive a lien of as much as $20,000 to rehabilitate their home. The lien would be reduced by 20 percent every five years until there was no balance. The lien would not need to be repaid if the original owner passed away and the property was willed to heirs.

Chanaka Yatawara, executive director of the Salisbury Community Development Corp., said many people with reservations have come in to ask about the program. He said the program almost seems too good to be true, and people expect the city to make money off it.

“Families are actually excited,” Yatawara said. “Initially they were a little apprehensive about the program because they wanted to know what the lien was. People have called me and Nicki (Brown, the intake specialist). Once we explain exactly how the lien works, they’re like, ‘Oh, wow. OK, that’s a great deal.’ We have to explain it clearly to them. I think maybe at the meeting we didn’t explain it as clearly.”

Yatawara said five properties are under contract for exterior work and the owners of four more houses are in the application process. Since the July neighborhood meeting, he said, about 60 people have picked up an application.

Beginning Monday, the boundaries of who can apply for the rehabilitation assistance will be expanded. The area is generally bounded by Partee, West Innes, West Monroe and South Craig streets, according to Janet Gapen, the city planning director. The city will notify property owners by mail if they are within the Phase 2 boundary.

Yatawara said the city has $400,000 for the program, which would cover about 20 properties.

“I feel like the program is a real benefit to them and the neighborhood, because (it’s) maintenance a lot of families really would struggle with,” Yatawara said. “The city is stepping up and really providing a great service to this neighborhood. I’m actually excited to see some of these homes done.”

He said he hopes the perception of the program will begin to be more positive after residents see projects completed.

He said he was expecting a lot of applicants when the program opened.

“I’m surprised we didn’t have the door knocked down,” Yatawara said.

Neely said she wishes more neighbors would use the program.

“I don’t understand why anybody wouldn’t want to improve their neighborhood,” she said.

Neely said her roof had started leaking and a new roof would’ve been a huge expense for her. With the lien, she has a new roof. She said she has begun to think about other things she wants to do to improve her house.

“I’ve been dreaming about it for a while,” Neely said.

For more information about the West End Housing Revitalization and Rehabilitation Program, contact the Community Development Corp. at 704-216-2738.

The program is offered to both homeowners and landlords.