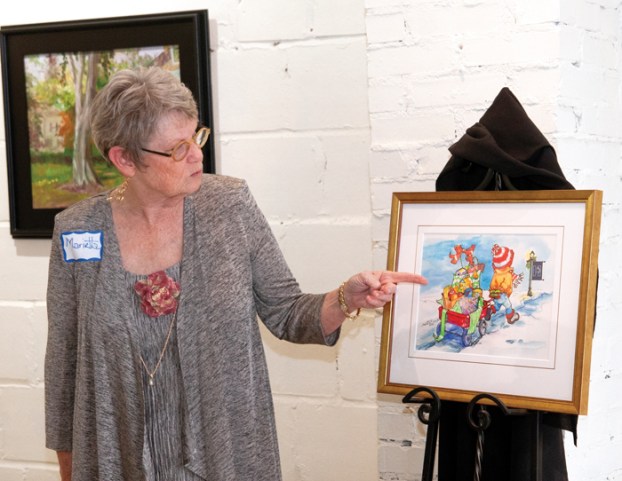 Artist Marietta Foster Smith talks about the details of her latest artwork, which was selected for the 2018 RHM Honor Card. Andy Mooney/Salisbury Post

A weekly quiz on local news

1. Sam Moir, a Hall of Fame basketball coach at Catawba College, died Oct. 20 at age 94. What annual event at the college is named for Moir, who coached at the school for 34 seasons?
A. Sam Moir Festival for Parkinson’s Disease Research
B. Sam Moir 10K Run for Juvenile Diabetes
C. Sam Moir Christmas Classic
D. Sam Moir Breakfast of Champions for Muscular Dystrophy

3. During homecoming last weekend, Catawba College launched a $38.2 million growth campaign. What’s the name given to this three-year campaign?
A. Mind, Body, Soul
B. Head, Heart, Hands
C. Leadership Fund for the Future
D. The 2022 Plan

4. John Peterson tried to set a world record Tuesday for doing a high number of these in an hour’s time. What exercise was Peterson doing at the Forum gym?
A. Sit-ups
B. Pull-ups
C. Abdominal crunches
D. Consecutive bench presses with 100 pounds

5. Sgt. Kevin Black and Chief Deputy David Ramsey of the Rowan County Sheriff’s Office, Special Agent Sam Gregory of the SBI and Assistant U.S. Attorney Terry Meinecke were honored by the U.S. Middle District of North Carolina and U.S. Department of Homeland Security for their investigation and prosecutions of what kinds of cases since 2015?
A. Cold-case murders
B. Illegal immigration
C. Felony break-ins
D. Firearms trafficking, drugs and violent crime

6. A Piedmont Players suspense drama now showing at the Meroney Theater also was a successful movie in 1967, starring Audrey Hepburn. What’s the name of this production?
A. “The Cape Town Affair”
B. “Guess Who’s Coming to Dinner?”
C. “Wait Until Dark”
D. “In Cold Blood”

7. Tara Safrit and Justin McDaniel will get married in April 2019. Twenty-three years ago, the Salisbury Post ran a photograph of Tara and Justin doing something together as kindergarten students at Isenberg Elementary School. What was it?
A. Carving a Halloween pumpkin
B. Dancing at a sock hop
C. Bobbing for apples
D. Painting each other’s faces for Halloween

8. Germanfest, the Rowan Museum’s Patrons Party and a program tonight at St. John’s Lutheran Church have all touched on the 250th anniversary of what related to St. John’s?
A. The start of construction of the present-day church at 200 W. Innes St.
B. The date in 1768 that St. John’s broke off from the Church of England
C. The conveyance of a deed that allowed for the building of its first sanctuary on North Lee Street
D. The date an elderly Ben Franklin worshipped with the St. John’s congregation

9. Salisbury’s DeeDee Wright recently attended a program at Furman University that recognized her participation as a teenager in 1960 with the “Greenville Eight.” Where did the group of activists, which included a young Jesse Jackson, famously stage a protest before being arrested?
A. Greenville, South Carolina, Public Library
B. A Woolworth’s lunch counter in Greenville
C. Furman University
D. Greenville’s all-white public swimming pool

10. Rowan Helping Ministries chose Marietta Foster Smith’s artwork for its 2018 Christmas Honor Card, which raises money for the organization. What was the title of Smith’s winning entry?
A. “Faith, Hope and Love”
B. “Sharing the Season”
C. “Peace Train”
D. “Wagon of Bounty”

Simulation helps others see how kids with dyslexia cope

SALISBURY — Try this exercise. To read the sentence that follows, you’ll have to realize that an “i” might be... read more