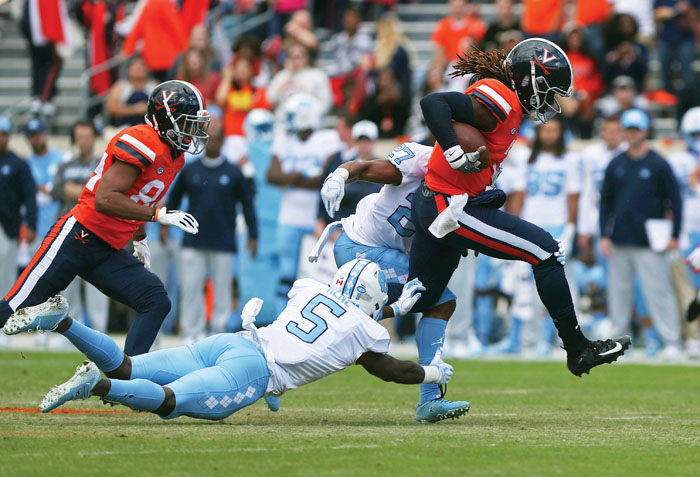 Virginia's quarterback Bryce Perkins (3) is tackled by two North Carolina defenders on a run during the first half of an NCAA college football game Saturday, Oct. 27, 2018, in Charlottesville, Va. (Zack Wajsgras /The Daily Progress via AP)

Perkins threw for three touchdowns and ran for another and the Cavaliers beat North Carolina 31-21 Saturday, keeping the Cavaliers atop the ACC’s Coastal Division standings and giving them bowl eligibility for the second year in a row, a first for the program since 2005.

“We’re not satisfied,” the junior transfer said. “We want the Coastal.”

Perkins ran for 112 yards, nearly half of that coming on a drive to open the game for the Cavaliers (6-2, 4-1 ACC), who won their third conference game in a row for the first time since 2011.

The drive was critical, coach Bronco Mendenhall said, because it set the tone for the game.

“You can’t play normal defense with Bryce and so once then the defense has to adjust, then the burden shifts back to our offense to acknowledge what they’ve done,” he said.

A year ago, when Virginia reached bowl eligibility for the first time since 2011, there was a wild celebration in the locker room. This time, it was almost a business-as-usual reaction.

The loss was the fourth straight for the Tar Heels (1-6, 1-4), and ended their four-game winning streak on Virginia’s home field.

The Tar Heels, coming off consecutive heartbreaking losses to Virginia Tech and Syracuse, will have to win all their remaining games to make a bowl game.

“Virginia was the better team today,” safety Myles Dorn said. “They don’t have better talent, but they performed better today. They played with more swagger than we did. They just played with more of an itch. They were more ready.”

The Cavaliers led 17-14 at halftime, but Perkins hit Dubois for a 33-yard score early in the third quarter and the defense limited North Carolina to two first downs and 43 yards. Perkins’ 16-yard pass to Butts on the first play of the fourth quarter made it 31-14.

Michael Carter scored from a yard out for the Tar Heels with 7:53 to play, but their last possession ended with a fourth-down incompletion as Nathan Elliott struggled against more pressure and the absence of a running game. They gained just 66 yards on the ground.

Zaccheaus has had four 100-yard receiving games this season, including a school-record 247-yard, two touchdown  effort in Virginia’s 45-31 victory against Ohio on Sept. 15.

“The capability has always been there, but his drive for excellence keeps accelerating to a higher level,” Mendenhall said. “He’s hungrier to be better. He also knows, and we’ve talked really bluntly, that if he doesn’t play well, we don’t have a great chance to win.”

Zaccheaus also had a 29-yard run in the first quarter, pushing him past 500 career rushing yards, and is the only active player in the nation with 2,000 receiving and 500 rushing yards.

North Carolina: Elliott had a very effective first half, completing 12 of 16 throws for 132 yards, but the Tar Heels’ inability to get a ground game going made things more difficult in the second half. After halftime, Elliott was just 11 for 22 for 139 yards.

Virginia: The Cavaliers defense continues to impress, especially at home. The Tar Heels gained 500 or more yards in their last two games but could never get their ground game going until they were way behind. The Cavaliers made a huge play late in the third quarter when Chris Peace sacked Elliott and he fumbled, Bryce Hall recovering at the UNC 35. Virginia has allowed just four touchdowns in four home games.