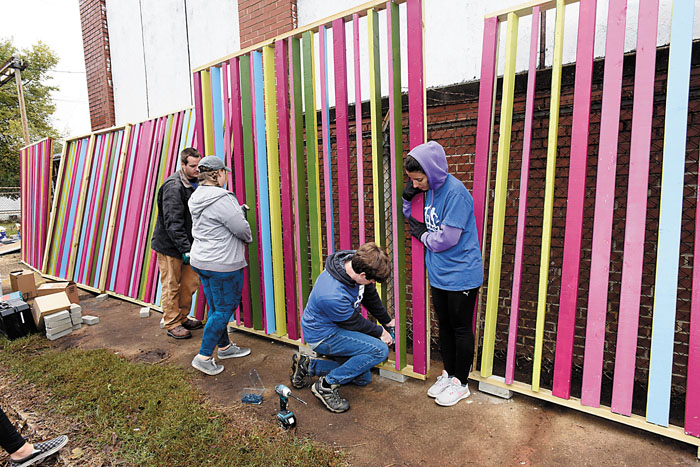 UNC-Charlotte architecture students work on a colorful wooden screen that was to used to cover a wall. Seth Byrd is drilling holes in the center. photo by Wayne Hinshaw, for the Salisbury Post

SALISBURY — Terry and Yvonne Moore sat on their front porch early Saturday morning, wrapped in warm coats and watched as more than 200 people moved through their neighborhood to paint, landscape and clean for this year’s BlockWork project.

The couple, a retired welder and retired employee of Salisbury Community Action Agency, have lived at their home for nearly 40 years. This year’s BlockWork site included their house and others on East Monroe Street as well as houses on South Lee Street where they border South Main and South Railroad streets.

The volunteers replanted Knock Out roses in the Moore’s front yard, which will replace roses that died after her husband accidentally trimmed them back during the wrong season.

“I think it’s a wonderful project to see the neighborhood improve that will inspire us to do more things,” Yvonne said.

She said she was grateful to the volunteers and city of Salisbury employees who worked early in the cold to beautify her neighborhood.

Kyle Harris, who is a planner with the city, said he believes in general people don’t do enough together.

“In a time of national division, events like these remind us that we’re not so different after all,” Harris said.

The couple don’t entertain family much at the home, but they do entertain Terry’s friends who all gather on the front porch to sit and talk.

“We’ve enjoyed staying on this corner for 40 years,” Yvonne said.

The volunteers also repaired the front door and reinforced the columns of the house that had begun to rot at the bottom.

BlockWork is a grass-roots program developed in 2010 by the Community Appearance Commission’s Neighborhood Leaders Alliance (NLA). The event strives to bring residents and community volunteers together to build cleaner and safer neighborhoods, one block at a time. Working together with property owners, residents, city staff and other support groups, participants help neighborhoods establish a proactive approach with stewardship of housing resources.

The BlockWork event was held during “National Make a Difference Day” and done in partnership with the Salisbury Community Appearance Commission and Salisbury Housing Advocacy Commission. Thousands have volunteered at six events with the first event held on South Shaver Street and the latest in 2017 was in the 700 and 800 blocks of N. Lee Street.

Most of the projects include painting, landscaping, general clean-up of a one-block area and some light carpentry work. The long-term maintenance is then taken on by the neighborhood.

Students with UNC-Charlotte’s College of Arts and Architecture created a colorful fencing installation as part of their design-to-build course. The class consists of a mixture of graduate and undergraduate students.

Within two weeks, the students came up with a few ideas, had an in-house competition and the winning design was built for the BlockWork project, explained student Ryan Smith. She said the students created a temporary design-to-build project for a Charlotte event.

Kiana Floyd, one of about 18 Rowan-Cabarrus Community College’s Early College students, said this was actually her fourth BlockWork project. She’s previously volunteered with her family. She even helped recruit some students to help with the day’s labor.

“I love BlockWork. I love this. I want to major in architecture and I love helping in the community,” she said.

About 30 0f Pfeiffer University students were also on hand to volunteer for this project. They were asked by professor Chris Howard, who teaches Survey of Leadership.

“I can’t teach servant leadership until you experience it. I like for them to experience education,” Howard said of his students.

“It’s an opportunity to work alongside the community and be a good neighbor,” said Kelly Misiak, director of service scholars with Pfeiffer.

Josh Canup, one of the project managers started with BlockWork about eight years ago and returned after hearing the encouraging words from a resident in a neighborhood he’d helped volunteer in. A woman whose community he’d helped beautify said she was happy about the small changes they made and how it inspired her to want to continue it. He’s ridden by that same community and they neighbors still take pride in it.

“It’s about empowering a neighborhood to see it doesn’t take a whole lot to make a difference,” he said.

Taylor Cielo, a Catawba College student, who also serves as the college’s service coordinator for the honors program, saw a BlockWork flier during a campus event and signed up. It was her first time volunteering for BlockWork.

“I really like community outreach. I think it’s beautiful city and the houses are beautiful,” Cielo said.

It was also the first time volunteering for BlockWork for Lewellen Padget, who said one of the reasons she signed up was because she’s really concerned about property values.

“Unless you protect property values, you won’t attract investors. You have to bring the level of care up to the value of Salisbury, that way we get more property taxes,” she said.

Instead of her usual Saturday morning walk with her walking buddy, Darlene Scott and her friend volunteered.

Scott said she was excited to serve in the community because it served a good purpose and was glad to volunteer alongside like-minded people.