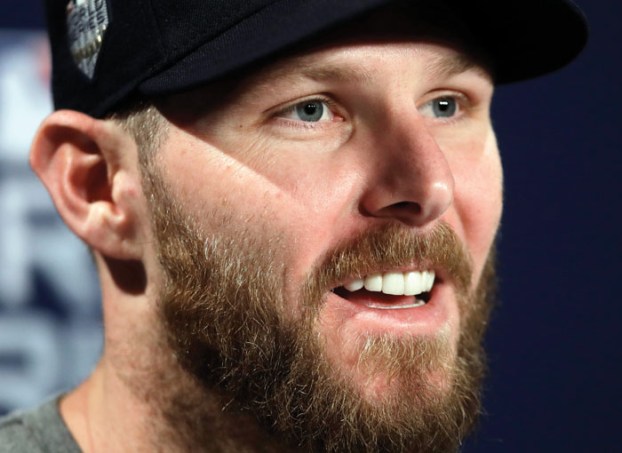 By RONALD BLUM, AP Baseball Writer
LOS ANGELES (AP) — The World Series was slipping away when Chris Sale stood in the back of the dugout and started screaming at his teammates.
The Boston Red Sox had just fallen behind the Los Angeles Dodgers by four runs in the sixth inning Saturday night, nine outs from finding themselves tied 2-2 in a World Series that seemed to be a runaway just 28 hours earlier.
His words were loud, not polite.
These were not the reassuring words delivered by David Ortiz in his dugout huddle in St. Louis after the fifth inning of Game 4 five years ago.
This was more like Justin Verlander’s motivational message to the Houston Astros when he popped up the stairs in the very same dugout during Game 2 last October.
Boston rallied on Mitch Moreland’s three-run homer off Ryan Madson in the seventh and Steve Pearce’s solo shot against Kenley Jansen in the eighth. Rafael Dever’s go-ahead single in the ninth was followed by Pearce’s three-run double and Xander Bogaert’s RBI single built a five-run lead. With a 9-6 victory, the Red Sox took a 3-1 Series lead and kept rolling toward their fourth title in 15 seasons.
Now it’s time for Sale to get the ball on Sunday night, facing off against Clayton Kershaw in a rematch of the opener at Fenway Park that got the Red Sox started.
One win from the title, one win from a ring, one win from being the toast of New England for the rest of his life.
Game 4 seemed like the test.
A 17-2 start meant the Red Sox could coast to the playoffs.
Other than an opening loss to Houston in the AL Championship Series that seemed like a bump, the Red Sox have approached another title like a marathoner pacing along the course, noting mile markers and counting down to the finish line.
Time to map the parade route.
Design a 2018 ring to dazzle.
After two nights of Fenway fun, the flight west seemed like the final stretch toward the inevitable.
Then came an epic 18-inning stumble that left the pitching staff frayed.
A run-scoring throwing error by catcher Christian Vazquez and Yasiel Puig’s three-run homer against Eduardo Rodriguez seemed like a crusher.
Sale was not going to let the Red Sox lose quietly.
___
More AP MLB: https://apnews.com/MLB and https://twitter.com/AP_Sports