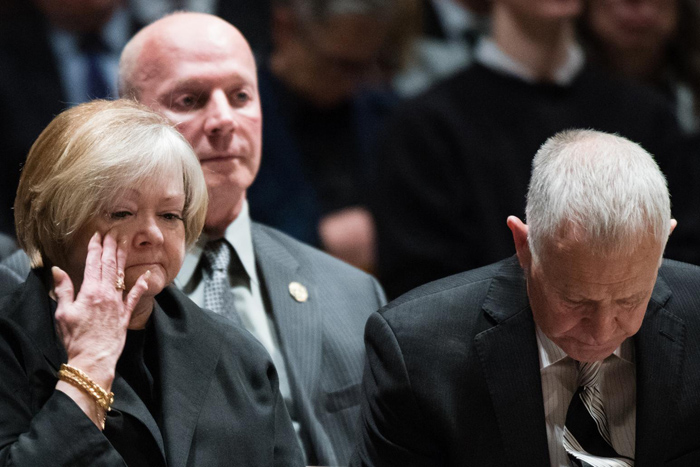 Judy Shepard, mother of Matthew Shepard, wipes a tear during the interment service for her son, Matthew, on Friday at Washington National Cathedral. Dennis Shepard, Matthew's father, is on the right. Sarah L. Voisin/Washington Post

WASHINGTON — It wasn’t until Judy and Dennis Shepard were sitting on the plane, leaving their home state of Wyoming for the nation’s capital, carrying their son’s ashes, that the feeling sunk in.

Twenty years after their son, Matthew Shepard, was brutally pistol-whipped and left to die on a buck-rail fence in a cold Wyoming prairie, making him a lasting symbol of the gay rights movement, his parents were on their way to lay his remains to rest in a crypt in Washington’s National Cathedral.

The service was held Friday at the second-largest cathedral in the country. Presideing in front of a crowd of about 2,000 people was Bishop Gene Robinson, whose elevation in the early 2000s as the first openly gay bishop in the Episcopal Church marked another important — and controversial — landmark in the push for LGBT equality.

In his homily, Robinson shared an anecdote from the first police officer who arrived at the site of Shepard’s attack, a remote fence to which his battered body was lashed and left out in cold night. The policewoman recalled encountering a deer lying beside Shepard’s body. When she approached, Robinson said, the animal looked straight into her eyes before bounding up and running away.

The thought of interring Matthew Shepard in the cathedral never dawned on his parents, they said in an interview in the massive, Gothic-style Episcopal church last Wednesday. They had only been in the cathedral once. They didn’t even know it was home to anyone’s remains, let alone the likes of President Woodrow Wilson, Helen Keller and Navy Adm. George Dewey.

But earlier this year, when the parents were presented with the idea of interring their son in the cathedral, they felt it was the perfect fit. Matthew Shepard had served as an acolyte in his local Episcopal church, a place where he “always felt really safe,” said Judy Shepard, who also taught Sunday school in the church.

Growing up, her son loved the theatrical, “pomp and circumstance” aspect of church and the sense of belonging it created.

His interment in the cathedral’s columbarium, a private, off-limits section of the lower level, will ensure that his final resting place will be safe from those who might disagree with what he stood for, who might want to desecrate the space, Judy Shepard said. Interring his remains in a church, of all places, his parents said, would send a message of acceptance and tolerance at a time when the relationship between churches and the LGBT community remains fraught. It will create a place for people from all over the world to visit their son and honor his memory.

“The privilege of having Matt here, for others to be able to go sit and reflect, it’s kind of stunning,” said Dennis Shepard, 69.

But for the parents, the choice will also mean a parting of sorts, “empty nester syndrome,” Dennis Shepard said. Having their son’s ashes close to them, in their town of Casper, Wyoming, has been a source of comfort for the past two decades. Now, they have laid him to rest 1,800 miles from home.

In October 1998, a cyclist passing through a prairie outside Laramie, Wyoming, found Matthew Shepard tied to a buck-rail fence, initially mistaking him for a scarecrow. The previous night, two men whom Shepard had met at a bar had kidnapped the 21-year-old, robbing and beating him and leaving him unconscious in the dirt for 18 hours. Authorities said the men targeted him because he was gay.

With Shepard clinging to life in a hospital bed, his gruesome attack became national news, prompting candlelight vigils across the country and underscoring acts of violence too often committed against gay people. As his parents made the journey to the Fort Collins, Colorado, hospital where their son lay in a coma, they were stunned to see his story on front pages in newspaper stands in the Minneapolis-St. Paul airport.

Two 21-year-old men were ultimately charged and sentenced to life in prison for Shepard’s murder. And Shepard’s parents were thrust into the roles of activists for the gay community.

While their son was still in the hospital, the Shepards began receiving scores of letters from families everywhere. Some asked the Shepards to reach out to parents who had rejected their children for being gay, Judy Shepard said.

That mission would end up extending much further than the Shepards ever imagined. Within months of their son’s death, his parents created the Matthew Shepard Foundation to advocate for the rights of LGBT people. Judy Shepard began traveling the country as a speaker on college campuses and in high schools. Matthew Shepard’s life would become the subject of books, movies, and the highly successful play “The Laramie Project.”

The parents decided they would fight in their son’s name “for as long as Matt’s story was out there.”

“We thought Matt’s story would go the way of all tragic stories. Everyone’s really interested in it in the beginning, and maybe the middle and perhaps a few at the end,” Judy Shepard said. “I don’t think either one of us thought that it would last beyond a couple of years.”

In 2009, after intense lobbying by the Shepards, President Barack Obama signed the Matthew Shepard and James Byrd Jr. Hate Crimes Prevention Act into law, expanding the definition of hate crimes to include those directed at LGBT people.

And about two years ago, the Shepards thought their job was largely done.

“The ultimate goal of establishing the foundation was always being able to shut our doors because we weren’t needed,” Judy Shepard said. Ahead of the 2016 election, they planned to start shifting their mission, focusing on their son’s legacy rather than advocacy against hate crimes.

That same year, reports of hate crimes carried out against LGBT people increased, according to the FBI. The following year, a page dedicated to LGBT rights disappeared from the White House website. And in the time since Trump became president, the administration has worked to dial back Obama-era rights for transgender people, moving to ban transgender people from serving in the military and saying it would assign transgender inmates to prisons based on the gender on their birth certificate.

Last week, news broke that the Trump administration is considering changing the way it treats transgender people under the law, seeking to deny claims that gender identity, rather than biological sex, can be used for protection under federal civil rights laws such as Title IX.

“We were almost to the level of acceptance throughout the country for LGBTQ,” Dennis Shepard said. “And with this administration, I’d like to get back up to the level of tolerance so then we can work again toward acceptance. It’s going to take many years to overcome what’s been destroyed in the last two years.”

The parents now see their role — and their son’s legacy — as more important than ever. But with the passing of two decades, they also acknowledge that many members of today’s younger generations might not even know their son’s name. Perhaps, Dennis Shepard suggested, that’s a positive sign.

“Young people don’t care,” Dennis Shepard said. “They’re more concerned with climate change, maybe gun control, maybe health care. They don’t care who’s holding who’s hand or whose dating whom. It’s not that big a deal. And that’s the way it should be. They should be accepting each other for who they are.”

While the Shepards do travel the country speaking to young people, they find themselves focusing their message more so on their own generation, which was “taught the myth, not the truth” about the LGBT community, Judy Shepard said.

“My generation … they are learning and having to reprocess everything they’ve known in the past about the LGBTQ community,” Dennis Shepard said.

Earlier this year, a team from the Smithsonian visited the Shepards in Wyoming.

They came to look through Matthew Shepard’s belongings, a trove of childhood memories and mementos from his everyday life. The Shepards had agreed to donate a collection of their son’s personal items for preservation at the Smithsonian’s National Museum of American History.

The parents had not sorted through the possessions in the 20 years since their son’s death. They gave a Smithsonian team free rein to sort through the boxes of clothing, letters and toys, but the parents couldn’t bring themselves to look through the items themselves.

“I didn’t want to go through that again,” Judy Shepard said.

There was the child-sized Superman cape that Matthew wore “every day,” the purple ribbon award he received at school, his preschool diploma. There was a note from a teacher about a time when the young boy was being bullied in school: “If kids are still bothering you about your size, please let me know, and I will talk to them,” wrote the teacher, Mrs. Babb. “Did you know: the very best things are often in small packages?”

Then there was one possession that the Shepards had never seen before: a wedding ring in a box. The parents don’t know the story behind the ring, but it reminded Judy Shepard of a conversation she had with her son in August 1998, when Hawaii was considering the legalization of same-sex marriage.

“I don’t know this for sure, but it might be that he had hope that someday he’d find somebody,” Judy Shepard said. “Maybe that’s what it means.”

As the Smithsonian team visited the Shepard home, one representative asked the family if they had ever thought about having their son interred in the National Cathedral.

Over the years, the Shepards had weighed where they might want to lay their son’s remains. They considered spreading the ashes in Wyoming, but Matthew’s younger brother, Logan, felt that the family needed a place to be able to go and visit their loved one. Dividing the ashes didn’t feel right either.

The owner of the Pulse nightclub in Orlando, Barbara Poma, once told Judy Shepard she was surprised there was no memorial for Matthew in Wyoming.

“Barb, you don’t understand,” Judy Shepard recalled responding. “Orlando embraced you. Wyoming did not embrace us.”

Two decades later, Matthew Shepard’s legacy still divides the residents of Laramie. Just days before the anniversary of his death, a forum was held in the town questioning the long-established belief that Matthew Shepard was murdered because he was gay.

They sought out help from a family friend, Bishop Robinson, who contacted the National Cathedral himself.

The family originally wanted a private ceremony for Matthew Shepard’s interment, Dennis Shepard said, “and they said, ‘Let’s open it up to the public.’ Now is that for our benefit or is it for theirs? The fact that they were still willing to accept that is the important thing. If they’re using it for their own benefit, so be it. But it’s also for the benefit of all those who wanted a place to go to honor Matt.”

Kevin Eckstrom, a spokesman for the National Cathedral, said the church offered the family the choice of a private service, but the Shepards ultimately decided to open it to all the people who are still moved by Matthew Shepard’s death and legacy.

The family hopes that young people will see the news of Friday’s service and know that “at least there are some facets of the religious community who accept all people, regardless of their differences,” Dennis Shepard said.

“They’re respecting who he was and what he represents now,” Judy Shepard said. “I think that sends a very powerful message.”