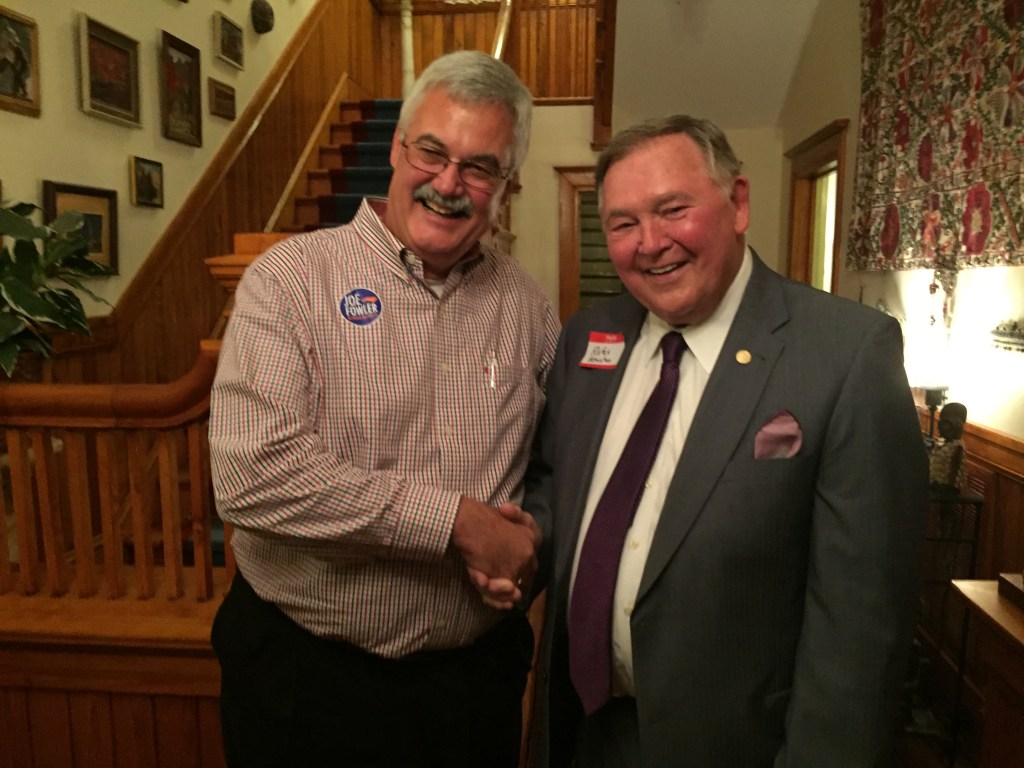 SALISBURY — In the South Fulton Street home of Mary and Will James, some 75 gathered Tuesday in support of legislative candidate Joe Fowler.

Guest speaker Rufus Edmisten, a former North Carolina attorney general and secretary of state, said Fowler is “just the guy” for the job.

Edmisten traveled from Raleigh for the early-evening mingle, which featured hors d’oeuvres, cocktails and a chance to donate to Fowler’s campaign.

He said 2018 will be a “banner year to straighten out the different branches of government in North Carolina.”

“I think in many ways that the General Assembly has overstepped its bounds in the separation of powers area,” said Edmisten. “… That’s not good for democracy. … We shouldn’t take that lightly.”

He said Fowler’s candidacy could be the difference between breaking the veto-proof majority or not.

Fowler, addressing the crowd alongside Edmisten from the Jameses’ staircase, said Rowan County has many challenges and opportunities ahead.

He stressed the importance of finding coal ash solutions that wouldn’t pollute the air and of making sure the county takes full advantage of its selection as a renewal school district.

“We’re going to get better, and we’re going to do it right here in Rowan and show other people how it’s done,” he said.

Both Fowler and Edmisten encouraged those in attendance to vote and to encourage their friends and families to do the same.

“It’s when someone encourages their friend or their neighbor to go out and vote with them,” he said. “That might be called a wave, but I call it enthusiasm.”

On Wednesday, Rep. Richard Hudson, R-8, joined President Donald Trump at the White House for the signing of a comprehensive package of bipartisan legislation to combat the opioids crisis.

Hudson was the only member of the North Carolina delegation to attend the signing.

“With the most significant federal action against a drug crisis in history, we’re getting more resources to our communities and folks on the front lines,” said Hudson. “I’m grateful for President Trump’s strong leadership, and I’m hopeful my bipartisan measures to get rid of unused opioids will go a long way in saving lives.”

Hudson’s office says the disposal legislation is critical because, according to the Journal of American Medical Association, less than 10 percent of patients dispose of opioids properly. Some 80 percent of people who use heroin had first misused prescription opioids.

The SOUND Disposal and Packaging Act is a bipartisan bill he introduced with Rep. G.K. Butterfield, D-1, that would encourage and promote improved packaging and disposal methods for opioids.

The Support for Patients and Communities Act was crafted to find solutions to help in overall efforts to advance treatment and recovery initiatives, improve prevention, protect our communities, and bolster efforts to fight deadly illicit synthetic drugs like fentanyl.