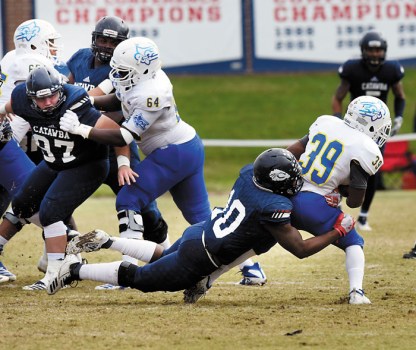 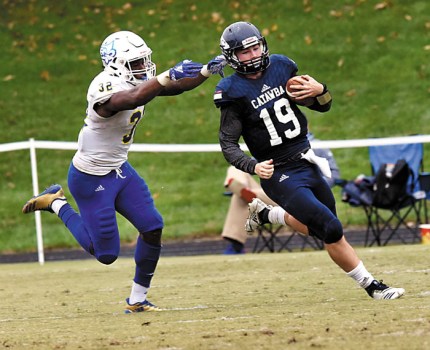 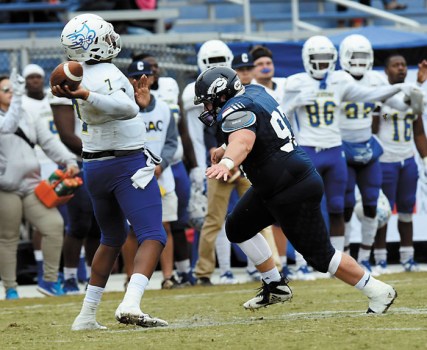 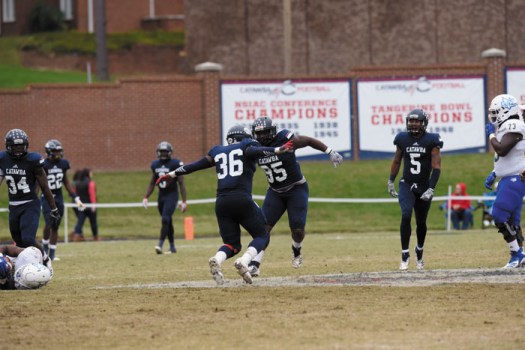 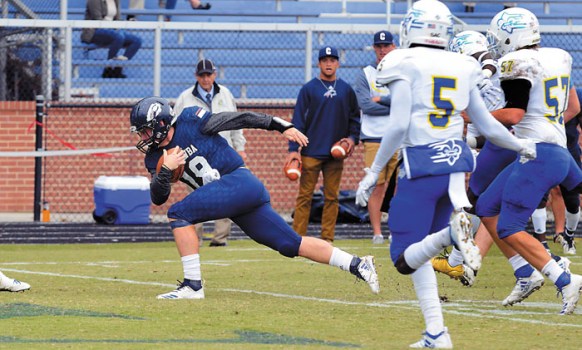 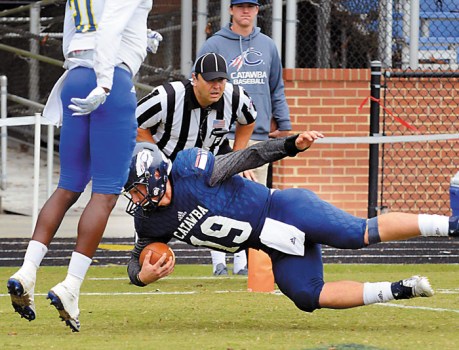 His team needs to ensure the redshirt-freshman keeps arriving safely — especially considering how he’s played the past two weekends for the resurgent Indians. Avent turned another batch of straw into gold Saturday at Shuford Stadium, where Catawba leveled winless Limestone, 43-6, for its second straight SAC victory.

“Avent is very important to this team right now,” coach Curtis Walker said after Catawba (3-5, 2-3) accrued a season-high 628 yards total offense. “Not only does he see the field and make plays, he’s been a great leader. The guys seem to have rallied around him. And the best thing he did this game was take care of the football.”

Avent, a midseason replacement for injured starter Reid Carlton, turned his fourth start into a spotlight dance. He filleted Limestone’s porous defense for 360 yards passing and two touchdowns — in addition to scrambling for 71 yards and another three scores.

“It feels pretty good to finally get a decent game under my belt,” Avent said, moments after completing 18 of 26 passes without throwing an interception. “It was tough coming in for (Carlton), but when things like that happen you’ve got to put it behind you and move on.”

Avent credits Catawba’s offensive line for providing secret-service protection and helping pull a few dents out of this fender-bender of a season.

“The biggest thing we’re doing is communicating,” said right tackle Demetrius Blackwell, a third-year starter. “Every time we got to the line, we’d pause and look at the front, look at what they were showing. We’d make adjustments once we got there — and usually made the right calls.”

Catawba ran 83 plays from scrimmage and dominated the line. Walker said a midweek conversation may have re-charged Blackwell and his trench mates.

“We made sure they understood what we wanted them to do in this ballgame,” he explained. “And they stuck to the game plan. They were very aggressive and fought to the echo of the whistle. It was a win in the trenches.”

Line play was pivotal as Catawba built a 24-0 halftime lead. Following a scoreless first quarter, Avent whirled his way to three touchdowns in the second. He polished off an 80-yard, 11-play touchdown drive with a 10-yard run that opened the scoring. Next came another 11-play drive TD drive capped when running back Kenyatta Greene (100 yards/17 carries) scurried around the right side on a 2-yard rush. Then with just 2:32 remaining in the half, Avent spiraled a picturesque 53-yard touchdown pass to freshman receiver Devonte Tanksley, who split Limestone’s defense on a left-to-right slant pattern.

“It was a bender route — and my best asset is speed,” Tanksley said after making five receptions worth 162 yards. “I just beat them backside and the middle of the field was wide open. We knew I’d get opportunities this week. The coaching staff looked at film and decided I would be a featured receiver. I just took advantage of the chance.”

Conference cellar-dweller Limestone (0-9, 0-6) squandered an opportunity to score on its first possession. The Saints went marching in — advancing from their own 25-yard line to the Catawba doorstep in nine well-conceived plays. But on fourth-and-goal from the three, tailback Malik Brooks bobbled a handoff from quarterback D.J. Phillips and fumbled into the end zone, where linebacker Ty Clawson pounced on the loose ball.

“I was nervous before that play,” Clawson revealed. “I was thinking if they got in, I’d get chewed out in the meeting room. I knew we were better than that. It was just a bad handoff. Something happened and somebody hit the runner. I saw the ball on the ground and reacted.”

Catawba’s lead bulged to 30-0 before the second half was two-minutes old. Two plays after rifling a 36-yard completion to junior Will Sweeper, Advent found him again — this time on a 28-yard throw down the right sideline for a TD.

The game’s loudest play nearly resulted in Tanksley’s second touchdown. Avent was credited with a 69-yard completion that Tanksley carried into the end zone, only to have the score nullified when the 5-10 receiver from Florida was flagged for unsportsmanlike conduct.

“He raised his hand and gave the peace sign before he got in,” Walker reported. “They called him for taunting.”

The 15-yard penalty moved the ball back to the Limestone 19. Five snaps later, Avent bulldozed off left tackle on a 3-yard TD. He scored Catawba’s sixth touchdown on a 7-yard walk-in with 9:30 t0 play. Limestone averted a shutout when Phillips lobbed a 48-yard touchdown pass to Cody Rau with 6:36 remaining.

“We knew if we stopped the run and forced them to pass, we’d be able to win the game,” Catawba’s Mike Miller said after making 11 tackles. “The key was to execute what we practiced all week.”

Miller, a sophomore defensive back, said the past two weeks have rejuvenated the Indians and added a little more light to the season’s shade.

“It’s an exciting feeling again,” he smiled afterward. “We have love and passion for the game here. For us to finally have some success, it makes it all fun again.”

NOTES: Walker and the coaching staff awarded a game ball to wide receiver Cam Hardie — a Canadian citizen who picked his mother up at the airport on Friday, then made his first collegiate reception in the waning moments. … Both teams had touchdown passes negated by penalties. … The Indians visit Newberry next Saturday afternoon. Catawba has requested a waiver from the NCAA to reschedule it’s cancelled home game against UNC-Pembroke on Nov. 17. A decision may or may not be forthcoming.