Who is Cesar Altieri Sayoc? What we know about the suspected mail bomber arrested in Florida 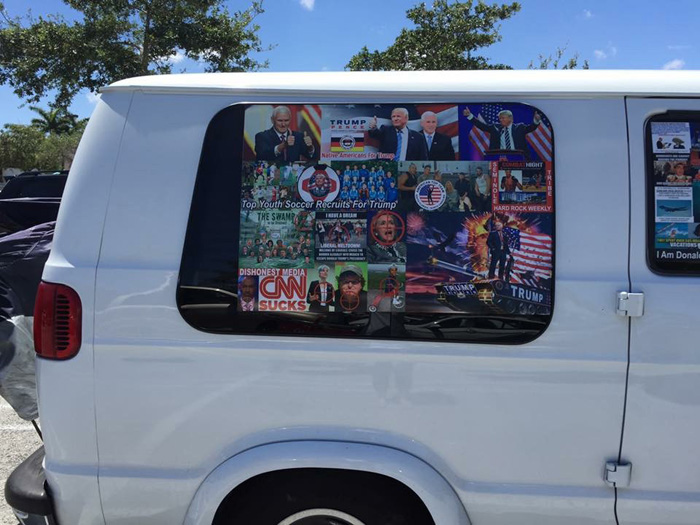 This May 2017 photo provided by Natalie B. Kline and obtained by The Washington Post shows a van parked near a shopping mall in Aventura, Florida. On Friday, federal agents and police officers examined this van in Plantation, Fla., in connection with package bombs that were sent to high-profile individuals who have been critical of President Donald Trump. Photo by Natalie B. Kline

Next to the pro-Trump stickers plastered all over the white van authorities believe belongs to Cesar Sayoc are the names and photos of dozens of prominent Democrats and media figures — former Secretary of State Hillary Clinton, former first lady Michelle Obama, former attorneys general Eric Holder and Loretta Lynch, and filmmaker Michael Moore. There is also a sticker declaring: “CNN Sucks.”

Authorities on Friday arrested Sayoc and identified him as a suspect in the sprawling mail-bomb scare that included at least a dozen suspicious packages sent to political and media figures, including many pictured on the van. Sayoc has been charged with five federal crimes, including transportation of explosives and threats against former presidents, and faces up to 58 years in prison if convicted, according to Attorney General Jeff Sessions.

Sayoc, a 56-year-old registered Republican, lives in Aventura, Florida, near the facility from where many of the packages were mailed, authorities said. In a criminal complaint, authorities said they lifted a fingerprint that matched Sayoc from the device sent to Maxine Waters and matched a DNA sample to Sayoc from two of the devices.

Sayoc, who was previously known to law enforcement officials, has been arrested nearly a dozen times in Florida, including a 2002 arrest for making a bomb threat. His criminal record in the state extends to the early 1990s, starting with his arrest for larceny at the age of 29, according to state records. Other charges of larceny, grand theft and fraud would soon follow across the southern part of the state.

In the 2002 bomb threat case, Sayoc pleaded guilty to the felony without a trial and was sentenced to probation, the records show.

According to Miami-Dade County jail booking records, Sayoc called Florida Power and Light and threatened to blow up the local electric utility. Sayoc said “it would be worse than Sept. 11″ and also threatened something would happen to the FPL representative he was talking to if the utility cut his electricity.

Debra Gureghian, general manager of New River Pizza and Fresh Kitchen in Fort Lauderdale, said Sayoc worked as a delivery truck driver for several months until he quit in January.

“He was crazed, that’s the best word for him,” she said. “There was something really off with him.”

The white van he drove to deliver pizzas was covered in disturbing images, she said, so the restaurant required him to park it on the side where it could not be seen.

He was kept on because he did his work reliably, and good drivers are hard to find, she said. But he disturbed his co-workers with racist comments and texts.

A lawsuit in which Sayoc was deposed said he had been a manager at a strip club called Stir Crazy for 35 years. In that same deposition, Sayoc claimed he was also a pro wrestler, a Chippendales dancer, a professional soccer player in Milan, and an arena football player in Arizona.

Relatives of Sayoc could not be immediately reached for comment Friday. An attorney who had previously represented Sayoc declined through his law office to speak Friday, saying: “We know why you’re calling, and we have no comment.”

Daniel Aaronson, an attorney who has represented Sayoc over the years, said none of his clients were “as polite and as courteous and as respectful to me” as Sayoc was. He said Sayoc never discussed his political views; if he had, it might have sparked a dispute.

“In fact, I am a Democrat,” Aaronson told The Washington Post. “I am very proud of some of the people that were targeted. … So, if he had said anything along those lines, I certainly would have noted it, because we would have gotten into a political discussion.”

Aaronson said Sayoc never talked about explosives, and the only allegation he was violent came in the course of the department store theft.

“When he got arrested, they charged him with battery on the store detective; but in all candor, my recollection of the events was he was tackled,” Aaronson said.

One tweet features a picture of Holder, one of the people a pipe bomb was addressed to. “This man murdered for political reasons and got away with it,” the tweet says.

Another claims Parkland shooting survivor David Hogg was a paid protester backed by George Soros, the billionaire philanthropist who received a pipe bomb in his mailbox on Monday.

A video clip posted on the Twitter account features a photo of Sayoc attending what appears to be a Trump rally. A “Make America Great Again” sign is behind him, and the crowd is chanting the president’s name.

A Facebook page that is believed to have been Sayoc’s and was disabled shortly after his arrest was filled with pro-Trump, anti-liberal memes.

The Charlotte Observer reports he was once a resident of Charlotte, N.C. Records show that Sayoc was charged in 1999, while living in Matthews, with possession of a stolen motor vehicle. The charge was dismissed.

His arrest Friday came after authorities found a dozen packages across multiple states, all of them addressed to prominent Democrats, Trump critics and the news network CNN.

None of the devices have detonated, and no one has been injured, but the incidents put officials on high alert as they worried how many additional devices may be out there.

After news of Sayoc’s arrest broke, FBI agents and other law enforcement personnel could be seen draping a blue tarp over a van in a South Florida parking lot before loading it onto a truck and driving it away.

President Trump, who is featured on many of the photos on Sayoc’s van, praised the law enforcement officers who made the arrest.

“We will prosecute them, him, her, whoever it may be, to the fullest extent of the law,” the president said at the White House. “We must never allow political violence to take root in America, and I’m committed to doing everything in my power as president to stop it and stop it now.”on contributed to this report.