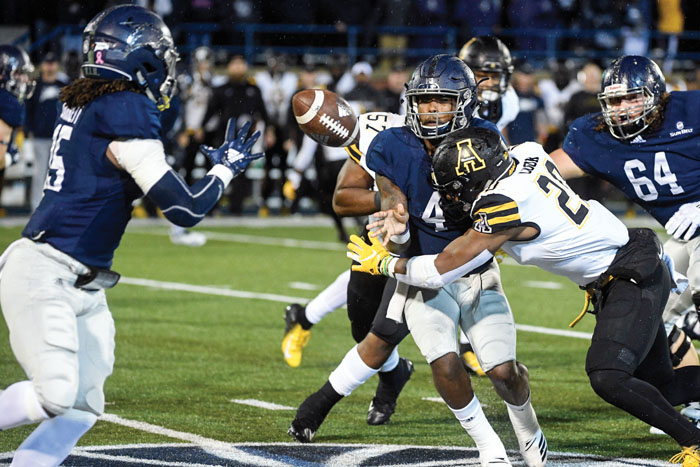 STATESBORO, Ga. (AP) — Appalachian State’s time as college football’s feel-good story ended after only a few days.
“It was cool while it lasted,” Mountaineers center Noah Hannon said.
Shai Werts rushed for 129 yards, including a 47-yard touchdown run, and Georgia Southern forced five turnovers to upset No. 25 Appalachian State 34-14 on Thursday night to spoil the Mountaineers’ first week in the Top 25.
Werts threw a 57-yard scoring pass to Darion Anderson early in the second quarter. It was Werts’ only completion in three attempts for Georgia Southern (7-1, 4-0 Sun Belt). Wesley Fields had scoring runs of 10 and 18 yards in the Eagles’ fifth straight win.
Georgia Southern fans stormed the field following the school’s first win over a Top 25 team. It was the first time a ranked FBS team played at Georgia Southern.
The Eagles continued their season-long trend of dominating the turnover battle. They didn’t commit a turnover against App State, leaving them with a plus-19 ratio for the season.
“This says a lot about this team,” Georgia Southern coach Chad Lunsford said. “I can’t give enough praise to this football team. … There is no doubt in my mind that this is such a tight-knit team. They are so tight, it’s not offense, it’s not defense, it’s not special teams, they are just a great group of guys and a brotherhood and they won this for the brotherhood tonight.”
The teams’ longtime rivalry goes back to their years as FCS Southern Conference powers, making the loss especially painful for App State (5-2, 3-1).
“Obviously, we can’t focus on the ranking,” Hannon said. “It comes and it’s gone now. … I’m sure it looked good on TV to see No. 25 by your name.”
App State quarterback Zac Thomas was knocked out of the game on the opening series for the Mountaineers. The back of Thomas’ helmet hit the ground as he was tackled following a 5-yard run. He was taken to the medical tent on the sideline and then escorted to the locker room. He didn’t return.
Backup quarterbacks Peyton Derrick and Jacob Huesman combined to throw four interceptions, and the Mountaineers also lost a fumble on a punt return.
“You’ve got to be able to handle adversity,” App State coach Scott Satterfield said. “We’ve had a lot of good things happen to us this year, but tonight definitely wasn’t one of them. Way too many mistakes.”
Derrick completed only 3 of 12 passes for 73 yards with two interceptions. Huesman took over in the fourth quarter and was intercepted twice by Kindle Vindor before throwing a 4-yard scoring pass to Malik Williams with only 10 seconds remaining.
Derrick completed a 50-yard pass to Corey Sutton to the Georgia Southern 3 early in the second quarter. Marc Williams’ 1 -yard run tied the game at 7-all.
The Eagles quickly scored following two first-half turnovers by the Mountaineers. Darrell Baker Jr.’s interception set up Werts’ long scoring pass to Anderson.
Dexter Carter Jr. recovered Clifton Duck’s fumbled punt return. On the next play, Fields’ 10-yard scoring run gave the Eagles a 14-7 lead.
THE TAKEAWAY
Appalachian State: The Mountaineers couldn’t overcome the loss of their quarterback and the four turnovers. Also costly were 11 penalties for 91 yards. App State never gained consistent offensive momentum without Thomas. The Mountaineers were held to 288 yards.
Georgia Southern: The Eagles were poised on their home field as Werts avoided turnovers in the triple-option offense despite playing in the rain. The Eagles kept pace with Troy in the Sun Belt’s East Division.
EJECTION
App State linebacker Jordan Fehr was ejected late in the first quarter after he was called for targeting on a late hit on Werts.
LONGTIME FRIENDS
The game matched longtime friends as opposing coaches. Lunsford was App State’s tight ends coach from 2001-02 and lived in Satterfield’s basement apartment for a year when Satterfield also was a Mountaineers assistant.
UP NEXT
Appalachian State: Visits Coastal Carolina on Saturday, Nov. 3.
Georgia Southern: Visits Louisiana-Monroe on Saturday, Nov. 3.
___
More AP college football: https://apnews.com/tag/Collegefootball and https://twitter.com/AP_Top25