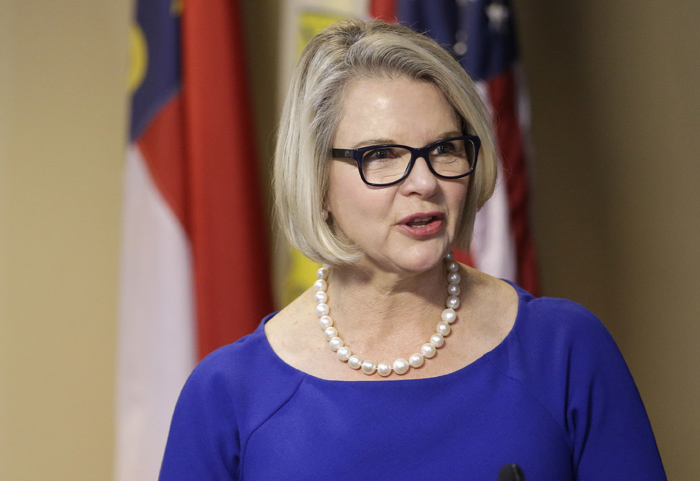 The University of North Carolina Board of Governors approved a separation package for Spellings paying her more than $500,000 when she leaves as president of the state’s 17-campus system in March, three years after she started.

Spellings got the job after the Republican-majority North Carolina university board in 2015 forced out her predecessor, who got the job under Democratic control. But the board has almost entirely been replaced since Spellings’ arrived and new members appointed by the legislature, several of them brashly conservative former lawmakers themselves, have sought to disrupt a public university system that had been seen as self-satisfied and elitist.

The ascendant board members, like Spellings, have said their goals included making campuses more affordable and efficient. But Spellings, who turns 61 next week, left little doubt the conflict made leaving the job her better option.

“Governance is always being calibrated and recalibrated over and over, and that’s part of the fun of the job,” she said. “The time is right for me to really step back and reflect on how many licks do I hit? How many rodeos do I have? What’s in my future? And move on.”

Spellings’ national reputation was seen as a boost for the schools that together enroll more than 220,000 students, and she spent her first months visiting campuses and building relationships.

But some power brokers in the Republican-led state legislature saw her name recognition as allowing her too much independence, and she quickly figured into the culture wars marking the rise of hard-right political values in North Carolina.

Spellings complied, if unenthusiastically, when the university system became a central battleground over a state law limiting anti-discrimination protections for LGBT people. The university system was sued because the law also required transgender people to use restrooms corresponding to the gender on their birth certificates in many public buildings.

The law led to companies, concerts and conferences shunning North Carolina. Spellings said last year that people recruited for university jobs had ruled out moving to North Carolina because of the law.

“I know people have withdrawn their candidacy,” Spellings told The Associated Press in an interview last year. “But how many? To what effect? Were they not coming anyway? We’ll never know.”

Spellings was reproached for a decision last year to request added security in the wake of deadly racist violence in Charlottesville, Virginia, and a majority of board members signed a letter criticizing “weakness” in the system’s response to plans for protests demanding the removal of a Confederate soldier statue from a central spot on the flagship Chapel Hill campus.

The Confederate “Silent Sam” statue was later torn down by demonstrators. The Board of Governors demanded that campus officials produce a plan by the middle of November about what to do next.

The panel also has challenged the hiring choices of the former Texas political operative, who became the first UNC president since the 1950s without an advanced academic degree. At least two of her choices to head campuses were challenged by statewide board members and her pick for chancellor of Western Carolina University in July was upended after one of the governors recruited an outside firm to investigate Spellings’ candidate.

State Senate Democratic leader Dan Blue of Raleigh said he became a fan of Spellings despite supporting Tom Ross, her predecessor who was forced out.

“I thought that Margaret had a grasp of the system, had a broad perspective and understood the real role that higher education played in this state,” Blue said. “I thought that she had a complete perspective, given her background in public education as the education secretary.”

She came to North Carolina after running the George W. Bush Presidential Center in Dallas. She also served on the board of directors for a student-loan collection company and for the for-profit University of Phoenix’s parent company.

As Bush’s education secretary from 2005 to 2009, Spellings oversaw the initial implementation of the No Child Left Behind federal education law. In 2006, she convened the Commission on the Future of Higher Education, which released a report calling on colleges to focus more on training students for jobs and encouraging research that businesses could commercialize.