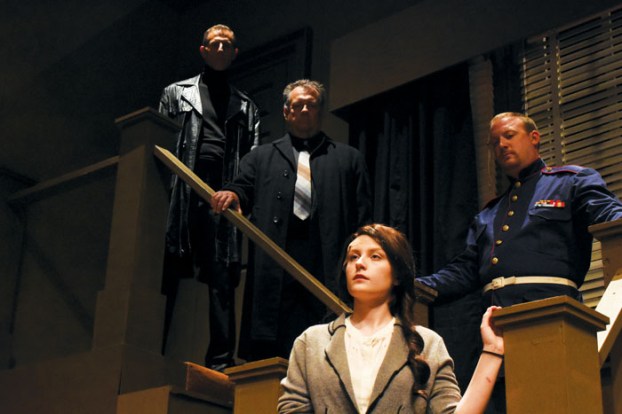 The cast of Wait Until Dark. Photo by Zach Stevenson / Salisbury Post

“Wait Until Dark” and lock your doors, close your curtains and don’t trust anyone.

Piedmont Players’ production of the thriller featuring a blind woman and a mysterious doll is suspenseful and scary.

The villains are villainous and the twists and turns are enough to shock you several times.

Many people remember the 1967 movie starring Audrey Hepburn. It emphasized the darkness and prolonged the threats until it was nearly unbearable.

The play, which was written in 1966, is set in 1945, just after World War II, when soldiers are home, war-weary and shell-shocked. This is an adaptation of the original.

The heroine, Susan or Susie Hendrix, is a blind woman, but blind for just more than a year. Her other senses are still developing. Her husband, a photographer damaged by the war, is rarely home. He encourages her to be independent, setting up situations where she has to rely on her instincts to solve problems.

Jordan Leigh Dover maintains a good level of uncertainty, frustration and fear. The young actress embodies the part — at times weak, ultimately incredibly brave. She does a remarkable job.

Sam, played by Ryan Wood, is distant, perhaps still suffering from what we now call PTSD.

Susan gets some help from Gloria, the child who lives upstairs. Miles Abramson, a veteran of Norvell Theater productions, is the obnoxious girl who likes to play tricks on Susan or make life difficult for her when she’s supposed to be helping. Abramson pulls off the part, going from a nuisance to a vital link in Susan’s survival.

Three men come and go from Susan’s basement apartment, and they have her well confused. A shocking revelation at the beginning of the play begins the complex plot that leads to danger.

Ron Mikat is very creepy as Harry Roat Jr., a criminal with a brutal streak. He’s determined to find a doll that ended up in Sam’s luggage on a train platform. He oozes danger.

He needs help, though, so he enlists Sgt. Carlino, an ex-cop ex-con who needs money. Eric Slipp slips into a New York cop accent and does his best to trick Susan into revealing where the doll is, though he is shocked by what Roat has already done.

Susan knows something is not quite right about him, especially when she learns about a murder down the street and Carlino starts to ask pointed questions.

Aaron Trusky is Mike Talman, an old Marine buddy of Sam’s. Susan comes to rely on him, and Trusky makes himself as protective and agreeable as he can. He’s worried about the woman and also feels something is not quite right.

When Harry Roat Sr. bursts in making accusations and stealing a photo from the bedroom, it just confuses and frightens Susan more.

But all the time, she is noticing things, thinking, trying to work out why the sergeant is so interested in an old safe that came with the apartment, and what he’s doing at the refrigerator, and why she hears a squeaking shoe more than once.

Tension builds as repeated intrusions into her apartment unsettle her. She wonders why everyone is so interested in the window blinds and what the doll has to do with anything.

A great deal happens that should not be given away. Surprises come one after another. The darkness hides much and reveals much.

Director Reid Leonard’s set is spare but with all the important details needed to make this ever-thickening plot work. It manages to be slightly claustrophobic, as well.

The play runs right at two hours, and it’s a good way to spend a scary night. It might be too intense for children, who also could be confused by the twisting plot. Make sure you listen to everything closely to keep up with the deadly game.

And give Amber Tamblin credit for her important role as the elusive Lisa.