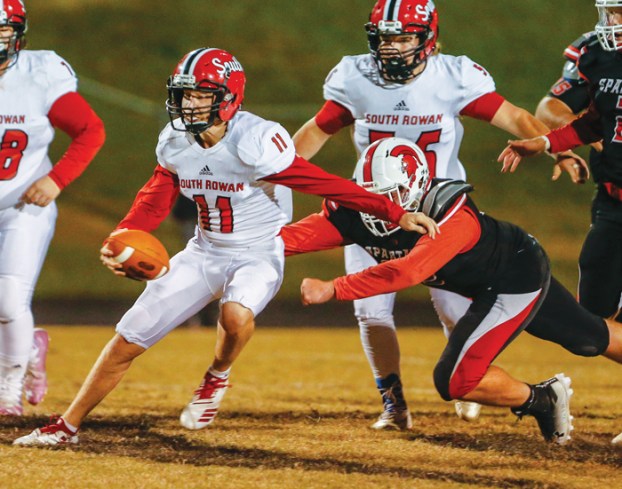 LEXINGTON — Central Davidson has had little to celebrate on the gridiron over the last four years.
So the Spartans turned back the clock and unleashed the double wing offense that was a hallmark of their success in the early part of the decade.
And it worked — but just not long enough.
South Rowan quarterback Drew Huffman scored on a 5-yard keeper with 1:22 remaining as the Raiders rallied to deal Central a heartbreaking, 14-13 defeat on Thursday at Spartan Community Stadium.
“We just gave up too many big plays down the stretch,” said Central coach Clayton Trivett, whose team lost its ninth in a row. “Kids played hard. I was proud of the effort.”
This one’s going to smart.
The Spartans held a 13-0 lead in the first half on touchdowns by Cory Casilac and Cole Stewart but were ultimately doomed by an excruciating sequence of events in the last few minutes.
Jared Simon, a hero earlier in Central’s soccer win over Ledford, nailed a 38-yard punt to the South Rowan 1-yard line with 3:42 left in the game, as the Spartans clung to a 13-8 lead.
Huffman completed just 6-of-24 passes on the evening, including zero for his first 11 attempts. But the 6-0, 160-pound junior came up with a huge one, stunning the Spartans with an 82-yard completion to wide receiver Jackson Deal to the Central 17. Deal caught a short throw and raced down the field before the Spartans’ Brandon Shore dragged him down.
“That’s what we call a pop,” said South Rowan coach Daniel Yow. “He caught it, made a move and took off down the sideline. That was a huge play for us.”
Huffman and Deal connected on another big play moments later on fourth and 7 from the 14. Deal made the catch and lunged forward to get just enough for the first down. Two plays later, Huffman was in the end zone. Though the Raiders missed on the two-point conversion, they led, 14-13, with 1:22 left.
Central wasn’t finished, though.
The Spartans, after playing out of the double wing the entire game, switched to an aerial attack and quarterback Matt Jones quickly moved them down the field on passes of 22 and 33 yards to Tanner Dally. A 7-yard pass to Reece Cope put the ball at the 8-yard line, but then Jones, rolling to his right, threw the ball in the right flat and it was intercepted by linebacker Corey Hartsell.
“I’ll have to see it on film,” Trivett said “I didn’t see it live.”
The Raiders then ran out the clock to improve to 3-7 overall and 3-5 in the CCC.
It started out so well for the Spartans.
“We came out in the double wing to give them a different look,” Trivett said. “We wanted to catch them off guard and it worked.”
Yes, it did.
“That’s an offense we weren’t prepared to see,” Yow said. “We didn’t have anything on film so we had zero game plan for it. We were able to make adjustments at halftime and make stops when we needed to.
Casilac’s 23-yard touchdown on Central’s first possession gave the Spartans a 6-0 lead. They made it 13-0 on Stewart’s 3-yard run and Trevor Musgrave’s extra point kick with 9:43 left in the first half.
Turnovers — four fumbles and the interception — ultimately kept Central from scoring more points.
South Rowan’s comeback began early in the third quarter after the Spartans went for it on fourth-and-three from the Raider 43 and couldn’t convert.
The Raiders, with the help of two ad-libbed plays by Huffman along the way, drove to their first touchdown, a 4-yard run by Christian Reynolds. Huffman then ran in the two-point conversion, cutting Central’s lead to 13-8 with 3:16 remaining in the third quarter.
Central was left with the hopes of carrying forward its effort on homecoming night into the season-finale at West Davidson next Friday.
“Our kids played hard the whole game,” Trivett said. “We had a good week of practice. Just came up a little short.”
Notes: Huffman threw for 132 yards and ran for 83 on 18 carries. … Central’s Ashton Shepler recovered two fumbles. … Stewart had 80 yards on 18 carries. … Casilac got 68 yards on 11 carries. … Jacob Jackson ran for 52 yards on 15 carries.
You Might Like