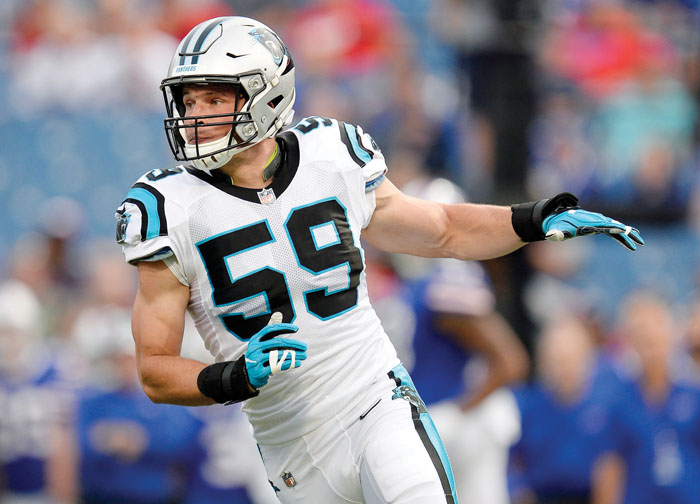 FILE - In this Aug. 9, 2018, file photo, Carolina Panthers linebacker Luke Kuechly chases a play during the first half of an NFL football game against the Buffalo Bills, in Orchard Park, N.Y. Kuechly was voted the NFL’s top inside linebacker by The Associated Press for the second straight year Friday, Oct. 26, with all 10 members of the panel picking the Carolina star first. (AP Photo/Adrian Kraus, File)

By SCHUYLER DIXON, AP Pro Football Writer
DALLAS (AP) — L-u-u-u-u-u-ke, and this time it’s unanimous.
Luke Kuechly was voted the NFL’s top inside linebacker by The Associated Press for the second straight year Friday, with all 10 members of the panel picking the Carolina star first.
The top three remained unchanged from a year ago, with Seattle’s Bobby Wagner second followed by C.J. Mosley of Baltimore. Kuechly got seven of 11 first-place votes in 2017, and Wagner picked up the other four. No such split this time.
“Hands down the top linebacker in the game,” wrote Barry Wilner, the AP’s lead NFL writer based in New York. “Kuechly is destructive against the run, savvy and versatile against the pass. A leader by example.”
While injuries — most notably concussions — limited Kuechly for two seasons and ultimately ended a three-year All-Pro run in 2016, the five-time Pro Bowler was back in All-Pro form last year. Kuechly had 125 tackles and three interceptions while tying a career high with five quarterback hits.
“Kuechly has been one of the top inside linebackers ever since entering the league and only injuries have slowed him down,” wrote AP Pro Football Writer Josh Dubow, based in San Francisco.
The 27-year-old missed just one game last year with a concussion and helped Carolina get back to the playoffs, with the Panthers losing a wild-card game to New Orleans.
Kuechly played a career-low 10 games in 2016, the only time the Panthers have missed the playoffs in the past five seasons with Kuechly as their defensive anchor.
“Carolina’s do-everything LB is the best in the business once again,” wrote Denver-based AP Pro Football Writer Arnie Stapleton.
Seven of the 10 second-place votes went to Wagner, who finished with 76 points to 69 for Mosley.
Wagner is the central figure in the Seahawks trying to move on from the Legion of Boom era since safeties Kam Chancellor (neck injury) and Earl Thomas (broken leg after contentious holdout) have likely played their final games in Seattle, while cornerback Richard Sherman has moved on to San Francisco.
The 28-year-old Wagner has one sack and one tackle fewer than Kuechly since the start of the 2014 season. He’s coming off consecutive All-Pro seasons, including career highs in tackles (168) and QB hits (13) in 2016.
Wagner had 13 tackles for loss and another 13 quarterback hits last year while battling hamstring issues, and had a groin injury early this season.
“Wagner is right up there with Kuechly in terms of making an impact whenever he’s on the field, and he has become even more important for Seattle without the Legion of Boom,” wrote New York-based AP Pro Football Writer Dennis Waszak.
Mosley was a walk-in starter as a rookie first-round pick in 2014, the last time the Ravens made the playoffs. They missed the postseason for a third straight year in 2017 despite a career-high 132 tackles from Mosley.
Tied for second in the AFC North with Cincinnati, Baltimore is the only NFL team allowing fewer than 300 yards per game. Opponents are averaging 281 yards.
“Baltimore is playing smothering defense and looking much like the 2000 squad that won a Super Bowl, and Mosley is a key piece to this unit,” wrote Tennessee-based AP Pro Football Writer Teresa Walker.
New England’s Dont’a Hightower was a distant fourth with 37 points, followed by Benardrick McKinney of Houston (31), Dallas’ Sean Lee (28) and Deion Jones of Atlanta (21). Miami’s Kiko Alonso (20 points), Telvin Smith of Jacksonville (19) and Washington’s Zach Brown (15) rounded out the top 10.
___
The rankings:
1. Luke Kuechly, Carolina
2. Bobby Wagner, Seattle
3. C.J. Mosley, Baltimore
4. Dont’a Hightower, New England
5. Benardrick McKinney, Houston
6. Sean Lee, Dallas
7. Deion Jones, Atlanta
8. Kiko Alonso, Miami
9. Telvin Smith, Jacksonville
10. Zach Brown, Washington
___
More AP NFL: https://apnews.com/tag/NFL and https://twitter.com/AP_NFL