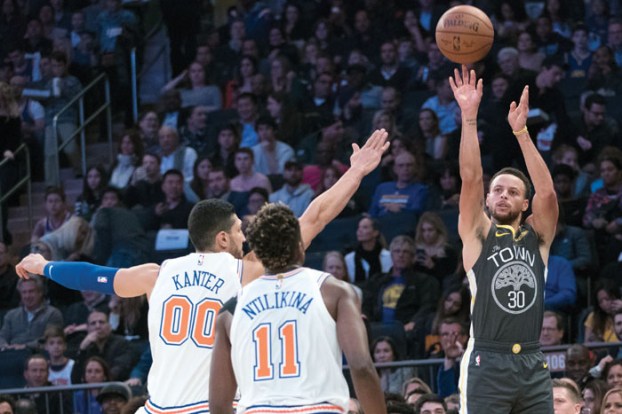 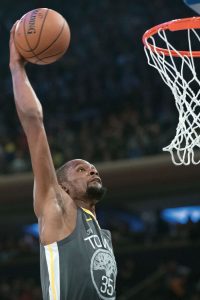 By BRIAN MAHONEY, AP Basketball Writer
NEW YORK (AP) — If this is what Kevin Durant can do at Madison Square Garden, no wonder Knicks fans are so desperate for him to come to New York.
This kind of show was worth seeing more than once a season.
Durant scored 25 of his 41 points in Golden State’s ruthless fourth-quarter clinic, and the Warriors beat the Knicks 128-100 on Friday night.
Durant was the center of attention leading into the game and then the star of it in front of fans who hope he will consider the Knicks if he becomes a free agent this summer.
He’s not interested in the off-the-court stuff right now, but he loved what happened on the floor in his 10-for-13 final quarter.
“It feels like when you catch every green light when you’re going somewhere,” Durant said.
New York led by three after three quarters before Durant and the Warriors starting hitting from all over the floor, making 19 of 26 shots — and things went so well that on a rare long-range miss by Durant, the ball bounced all the way out behind the arc to a wide-open Stephen Curry, who made the 3-pointer.
Asked what changed in the fourth quarter, when Golden State outscored New York 47-16, Knicks coach David Fizdale said: “Kevin Durant.”
Curry added 29 points and six 3-pointers, giving him at least five in every game this season. But on the floor where he scored a career-best 54 points in 2013, his performance seemed almost quiet because of Durant.
He finished 17 of 24 from the floor, including 5 of 9 from behind the arc — where one of the misses was a one-legged attempt.
Tim Hardaway Jr. scored 24 points for the Knicks, who have dropped five in a row after a season-opening victory over Atlanta.
Fizdale changed up his starting lineup, going with Hardaway, Frank Ntilikina, Noah Vonleh, Damyean Dotson and rookie Mitchell Robinson, and the group provided a 16-10 lead.
But it was quickly wiped out mostly by Curry, who made his first five shots, with three of them behind the arc.
Durant drew plenty of notice upon his arrival and a loud ovation when he was announced with the starting lineups. He can become a free agent after this season and Knicks fans hope he can speed up their rebuilding. A billboard urging him to come to New York popped up on a building near Madison Square Garden this week.
Curry said it’s not a distraction, saying the Warriors have faced greater concerns during their run of three championships in the last four years.
“The way he’s handled it, obviously letting his play speak for itself and not getting too wrapped up or involved in it, understanding we’ve got seven more months of this,” Curry said. “So we know how to keep distractions out of our locker room and just play basketball and enjoy what we do.”
TIP-INS
Warriors: Golden State visits the Brooklyn Nets on Sunday. It’s the first time the Warriors have played the two New York teams on the same trip. … Draymond Green scored 18 points.
Knicks: New York has lost the last nine meetings. … Ntilikina scored 17 points and Trey Burke, the former starting point guard, had 15.
BYE, BOOGIE
DeMarcus Cousins isn’t even playing for Golden State yet and he’s been ejected from a game.
The volatile center was sitting in street clothes for arguing with referee Scott Foster in the first quarter.
As play resumed following a timeout with 2:28 remaining in the first quarter, it was announced that Cousins had been assessed a technical foul during the break, and then subsequently ejected.
Cousins is still recovering from a ruptured Achilles tendon. He took part in his first practice with the Warriors on Thursday, but there is still no timetable for his return to action.
FEAR FACTOR
Warriors coach Steve Kerr, who has been outspoken about President Donald Trump and gun violence, was asked if was concerned for his own safety in the wake of the mail bombs sent to prominent Democrats.
“A little bit, yeah,” Kerr said. “I think we should all be concerned. No matter who you are you need to be concerned, not just of the bombs, but just somebody shooting you,” adding it was a “dangerous time to be alive right now” in the U.S.
Kerr’s father, Malcolm Kerr, a professor who served as president of the American University of Beirut, was shot and killed outside his office in the war-torn Lebanese capital in 1984.
UP NEXT
Warriors: Visit Brooklyn on Sunday.
Knicks: Host Brooklyn on Monday.
___
More AP NBA: https://apnews.com/tag/NBA and https://twitter.com/AP_Sports