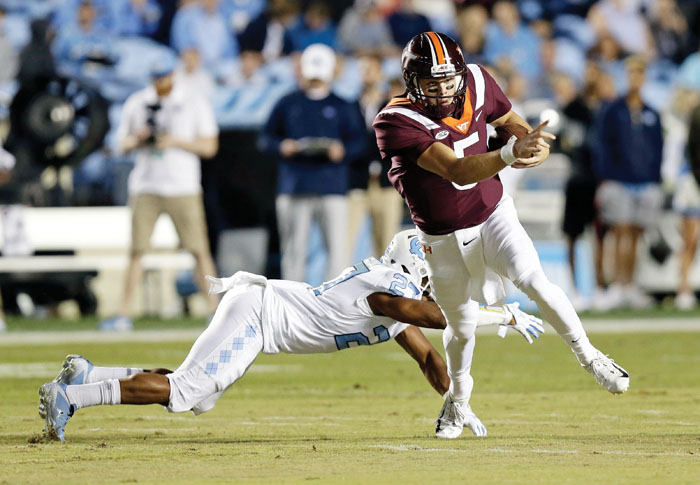 Virginia Tech is leading the ACC’s Coastal Division and has posted all three of its victories on the road.

The Hokies hope to pad their lead when they host Georgia Tech on Thursday night.

“They’ve got a lot of young guys but they’ve got some really good athletes and they run well,” Georgia Tech coach Paul Johnson said. “Where they’ve struggled the most is on the back end against passing teams, really.”

Hokies coach Justin Fuente said Virginia Tech’s scout team has done a good job of preparing the defense for how to defend the triple option, but the one aspect that is more difficult to simulate is the Yellow Jackets’ speed.

While the teams are not geographical rivals, Johnson said success has turned the series into a rivalry.

As the lone unbeaten team in the Coastal Division, the Hokies have the upper hand on winning another title this season, and they have the added advantage of playing four of their last five games at home.

Key to that success will be the continued development of a young defense that allowed 49 points against Old Dominion and 45 against Notre Dame , but Fuente said he has been pleased with their growth to date.

Here are some things to watch when Georgia Tech visits Virginia Tech:

Virginia Tech and Georgia Tech are tied for the most appearances on ESPN’s Thursday night games with 32. The Hokies have thrived in that scenario, winning 23 of their appearances, including all six against the Yellow Jackets.

Georgia Tech will be trying to become the first road team to win three straight games in Blacksburg since Miami in 1967, 1982 and 1992. Johnson is 4-6 against the Hokies overall, but 2-0 against Fuente’s Virginia Tech teams.

Quarterback TaQuon Marshall leads Georgia Tech is rushing with 598 yards and has run for nine touchdowns, but won’t be the only signal caller in the  game that can do damage with his feet. Virginia Tech’s Ryan Willis ran for 88 yards in the Hokies 22-19 victory against North Carolina . Included in that was a 33-yard scoring run.

Whatever the cause, protecting the ball is an obvious key for the Yellow Jackets. Georgia Tech has lost the ball only three times in its three wins — all three in the season-opening win over Alcorn State. The Yellow Jackets have nine turnovers in their four losses.

They were plus three on turnovers in their win against the Hokies in 2017.