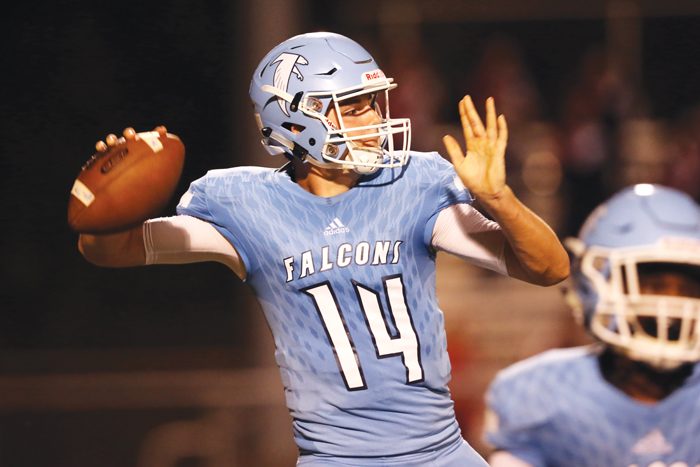 Another football week is being shaken up by weather.

Local varsity games have been moved up to Thursday night at 7:30 p.m., with the exception of the Statesville at East Rowan contest.

That one, and it’s a big one, is still set for Friday in Granite Quarry.

It will be a busy high school Thursday. In addition to a nearly full slate of varsity football,  West Rowan, Carson and Davie (which enjoyed a first-round bye) play home volleyball matches in the second round of the playoffs tonight. South Rowan is at Forbush.

It’s become a very offensive-minded football year in the county, with East Rowan’s Sammy Pinckney rolling up two 200-yard rushing games in the past three weeks, and West Rowan’s Jaden Perry romping for 181 and 278 in his last two games. Pinckney is over 1,000 yards for the season now. North Rowan’s Malcolm Wilson has been pounding away all year and still leads the county with more than 1,200 rushing yards.

The 200-yard rushing game once was quite rare in Rowan, but there have been six this year with Wilson and Pinckney accounting for two apiece and Perry and Carson’s Jerry Cipres producing one each.

There have been 14 200-yard games in the county in the last four seasons. West’s Jovon Quarles, North’s Jaleel Webster and East brothers Max and Sam Wall contributed to that total.

Keep an eye on the East Rowan-North Iredell game next week. North Iredell’s defense already has yielded career rushing games to Perry and Cipres. If Pinckney gets his usual 30 carries he might put up the first 300-yard rushing game of the season.

The county record for rushing yards in a game is 356 by West’s K.P. Parks in 2009 against Carson.

A school passing record fell last week, with West’s Payne Stolsworth throwing his 66th and 67th career TD passes to move past B.J. Sherrill. Stolsworth is also threatening the county record of 74 set by East’s Samuel Wyrick in 2014. This season, Stolsworth has 19 TD passes. No one else has more than nine.

Besides Stolsworth, two more Rowan QBs, North’s Willis Mitchell and South’s Drew Huffman (who missed one game with a concussion) have moved past 1,000 passing yards for the season. There was a time when that was a huge milestone.

Two more Rowan QBs, Salisbury’s Mike McLean and East’s Logan Forbis, should get to 1,000 with no problem. Yes, teams are throwing more than they used to. South and Salisbury have been ground-oriented programs over the years, but they are filling the air with footballs.

McLean and Huffman are their respective team’s primary runners.  Both had games last week in which they rushed for more than 100  yards while throwing for more than 100. That also was unusual back in the day.

The county scoring tightened up last week, as North Stanly kept Wilson out of the end zone. He has 15 TDs, but West’s Jalen Houston gained a lot of ground with a rushing TD, a receiving TD and a return TD against North Iredell. Now he has 14. Perry and Sam Wall have 10 TDs each.

The picks were 7-1 last week, with the miss coming on East’s win against South Iredell. South Iredell was missing QB Ty Everhart, but that’s still the second huge win for East in two weeks.

If East (5-4, 2-1) wins, the Mustangs are going to at least be part of the conference title picture.

East has a pretty good chance to win. Wet conditions should down the Greyhounds some.

Statesville’s points differential (plus-197) and defensive numbers (65 points allowed) are scary and the Greyhounds (6-3, 2-1) stomped a Carson team last week that went down to the wire with East.

On the other hand, Statesville blew a lead against South Iredell in the fourth quarter, and East handled South Iredell.

The teams have similar offensive philosophies. Both will run the ball about 75 percent of the time.

East is 2-11 against the Greyhounds, with the most recent victory by the Mustangs coming in 2009.

Carson (3-6, 1-2) should be able to rush for 200-plus against a West team that is allowing 25 points per game, but Carson’s defense has allowed 30 per game and is unlikely to slow down Stolsworth, Houston, Perry and the Falcons. Linemen Dawson Sheesley, Levi Jenkins, Edwin Barrios, Logan Younce and Colton Evans and tight end Ben Bonds have been opening the holes for Perry. Linebacker Baiden Suddarth led West’s defense again last week.

Hunter Courtney had 142 rushing yards for Carson last week, with many big gains triggered by blocks by back Michael Gonsalves.

For Carson, an important game to try to get into the playoffs. For West,  a victory would mean another undefeated season in the county and it would mean staying in the hunt for a title in the NPC. West, East, Statesville and South Iredell enter tonight in a four-way tie at 2-1.

Salisbury (5-3, 5-1) probably is the third-best team in the 10-team Central Carolina Conference, but this is going to be a big challenge for the Hornets. The Hornets hung with Ledford recently, so maybe they can do it again.

Salisbury sophomore nose guard Zae Clay (12 tackles last week, 4 for loss) will be the first line of defense against the Black Knights (8-1, 7-0) and is playing at a high level.

The Black Knights demolished the Hornets a year ago, 45-0, but Salisbury should do better this time.

The Raiders aren’t favorites on the road often, but they’ll be expected to return from Central Davidson with a CCC victory.

South QB Drew Huffman could put up some career numbers.

North Rowan (6-2, 3-1) can’t wait to get back on the field after Friday’s turnover-plagued, 43-8, disaster against North Stanly.

Things should go a lot more smoothly for North Rowan in this Yadkin Valley Conference contest, as West Montgomery (4-5, 3-2) isn’t nearly as strong as it’s been in recent years.

North is 6-6 against West Montgomery all-time and lost to the Warriors, 20-13 last season.

North’s most recent victory against West Montgomery came in overtime in 2012.

West Forsyth is 4-1 at home but 1-2 on the road, and this one is in Mocksville, so Davie has a shot.

West Forsyth won, 20-17, last season. Davie’s last win against one of its bigger rivals came in a defensive-minded affair in 2016, but the Titans have won five of the last six meetings and lead the all-time series, 22-14.

Robinson outscored A.L. Brown, 49-42, last season in a game that decided the SPC.

A.L. Brown (4-5, 0-3)  has lost three straight weeks for the first time in this century, but is still ranked 68th in the state for all classifications. That gives you an idea how tough the South Piedmont Conference is.

Will the Wonders and Concord Spiders really go into the Bell Game with 0-4 SPC records?