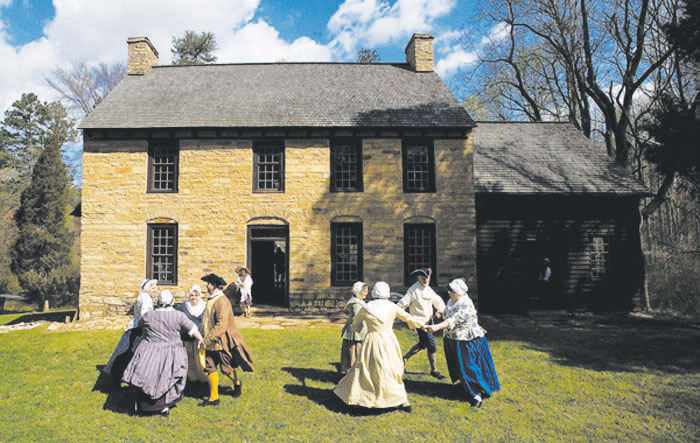 GRANITE QUARRY — As they settled the New World, Europeans brought honey bees and beekeeping skills with them.

Some records show that the English-based Virginia Co. sent German beehives to the Jamestown settlement as early as 1621. So maybe it’s entirely fitting that representatives of the Rowan County Beekeepers Association will be on hand at Saturday’s Germanfest at the Old Stone House.

Michael Braun (his descendants became “Brown”) completed the house in 1766, and it’s considered one of the finer examples of German architecture in the Southeast.

There is some parking for Germanfest across from the house, but trolley and van shuttles also will be available throughout the day from the parking lot of Granite Crossing (the old Winn-Dixie) at 900 N. Salisbury Ave., Granite Quarry.

The cost for attending Germanfest is $5 for adults and $3 for students.

Randy Cox, immediate past president of the Rowan Beekeepers, said his association will have displays, information, handouts and people to talk with about bees.

Unfortunately, it probably will be too cold to have live bees present. Cox said his group will be selling locally produced honey and lotions made from beeswax. For kids, there will be chances to color and learn.

The local beekeepers group has more than 110 paid members — dramatic growth, considering that six years ago membership stood at 30.

The association plans another one of its Bee Schools in January that’s designed to share information about honey bees and beekeeping.

Honey bee populations have been under a lot of stress and decline in recent years.

“There are a lot of factors involved,” Cox said. “One of the biggest is loss of habitat. We don’t have the fields of wildflowers and number of trees we once had.”

The Beekeepers Association meets the second Monday of every month, except December, from 7 to 9 p.m. at the Rowan Cooperative Extension office, 2727 Old Concord Road, Salisbury. The group often has guest speakers.

Marcel Renn is the current president.

As you might have expected, New Sarum will offer a honey-infused beer — honey persimmon — at Germanfest. Other specialty beers will include a stein beer, German bock, and one made with spruce tip and molasses.

Because of weather forecasts for rain and cold Friday, the Rowan Museum’s reservation-only patrons party with German food and beer has been moved from the Old Stone House to the Messinger Room at the museum, 202 N. Main St.

Doors open at 5:30 p.m. for patrons. Gary Freeze, the William R. Weaver professor of humanities at Catawba College, will speak on St. John’s Lutheran Church and the 250th anniversary of its deed.

Weather forecasts for Saturday call for a high temperature of 56 degrees.

The Brown-Fisher Association will meet on the Old Stone House grounds from 11 a.m. to 1:30 p.m. Saturday during Germanfest.

As a teenager, Michael Braun sailed to the New World on a ship called the Glasgow, arriving at the Philadelphia port in 1738. Coming as a bond servant, he had to work several years in Pennsylvania to pay for his trip.

Braun stayed in Pennsylvania for 20 years, becoming a wheelwright. He came to Rowan County in the late 1750s, and in the back country near the middle fork of Crane Creek, Braun bought 274 acres and started building a massive house.

From a nearby quarry, oxen hauled in 3,500 tons of granite. Construction of the house took a good seven years.

After a half century of being abandoned, vandalized and in disrepair, the house was sold to Rowan Museum in 1959. It was restored and opened to the public in 1966.

In Rowan County, Braun continued his work as a wheelwright and farmed. Historians says he might have established the first printing press in western North Carolina in his time.

Braun also would serve as a constable and justice of the peace. He lived in the Old Stone House for more than 40 years and came to own more than 3,000 acres.

Braun and others were among the first wave of German immigrants. Between 1820 and 1870, more than 7.5 million Germans came to the United States, more than doubling the country’s population.

German-Americans continue to be listed as the largest ethnic group by the U.S. Census Bureau, with an estimated 46 million Americans having full or partial German ancestry.