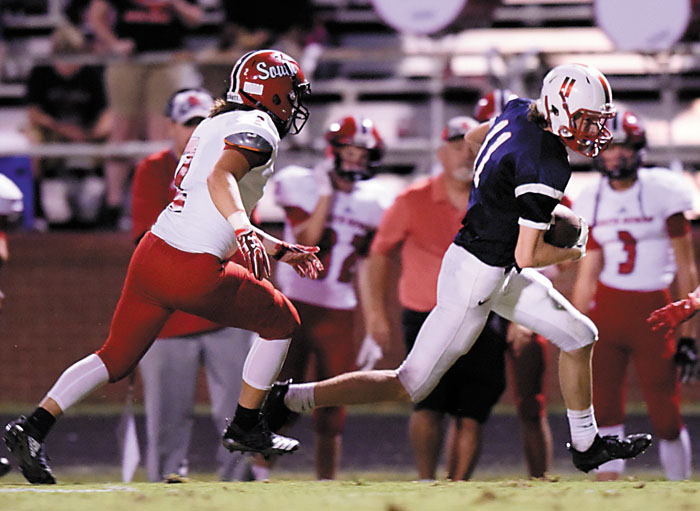 Wayne Hinshaw file photo/for the Salisbury Post ... East Rowan’s Gabe Hinceman (11), right, runs after catching a pass against South Rowan on Aug. 24. Hinceman starts on both offense and defense, kicks both field goals and extra points and is on all of the Mustangs’ special teams.

GRANITE QUARRY —  Gabe Hinceman is being interviewed on East Rowan’s football practice field when the national anthem cranks up prior to a middle school game on East’s softball diamond 100 yards away.

Hinceman has his back to the softball activity, so he politely excuses himself. He turns, faces the American flag and stands silently at attention.

It’s a small thing, but it’s also a big thing. It says a lot about the character he brings to the fields and the gyms where he competes. This is a teenager who carries himself well beyond his years, a young man determined to do things the right way. He’s as good in the classroom as he is in sports. He’s a member of the National Honor Society.

He’s proficient at hoops, a starter for the Mustangs who frequently scores double figures. At 6-foot-3 and a long, lanky 175 pounds, he has a frame ideally suited for basketball.

“But when I started out in sports, it was wrestling,” Hinceman said. “From first grade to seventh grade, I always wrestled. But my dad wanted me to try football in eighth grade, and it didn’t take me long to fall in love with it. Now it’s football and basketball.”

It’s football season now, and while he looks a little thin,  he’s tough. He’s been instrumental in East’s roller-coaster ride from 3-0 to 3-4 to 5-4 and contention for the North Piedmont Conference championship.

East wouldn’t be where it is without Hinceman. East’s go-to receiver/free safety/kicker, he plays every snap.

“There might be a play here and there, a short yardage situation, where he might come out, but he’s not off the field often,” East head coach John Fitz said. “Besides starting at free safety and receiver, he kicks off, he kicks the field goals and PATs, and he’s on every special team we’ve got. He wants to be on the field. I know he’s never asked to come out of a game.”

“Mount Pleasant is solid and they had started playing well by the time we played them,” Fitz said. ” Central and Northwest are very good. Northwest is as good as a lot of the Charlotte teams. They’re doing it to everybody.”

East’s turnaround actually began in the 35-14 loss at West Rowan  on  Oct. 5. West prevailed with huge plays — Payne Stolsworth and Jalen Houston can do that to you — but East ruled the line of scrimmage, stopping the run while pounding out 300-plus rushing yards.

“West threw the ball over our heads  a few times, but we did a lot more right than wrong,” Fitz said. “We played well. The kids felt like they could have won that game and we got the belief  back that we were a good team. Look, a football season is long and I’ve never seen one yet go in a straight line. There are going to be peaks and valleys.”

Carson vs. East was next, and that is such a fierce rivalry, that the records don’t even matter.

East had to overcome three turnovers and too many penalties, and it came down to the final play. It was Hinceman who knocked down a Carson pass in the end zone to preserve a 28-21 win.

“Hopefully, we’ll look back on that one as a play that changed our season,” Hinceman said. “It feels good to know that play helped us be where we are now.”

He was a freshman jayvee. East had a surplus of receivers when he was a varsity sophomore, so his early contributions were as an outside linebacker.

As a versatile all-county junior, he caught three touchdown passes, scored on defense with a 55-yard pick-six and kicked two field goals and 21 PATs.

As a senior on a team that has talent, but lacks depth, there’s no rest.

“Every snap,” Hinceman said. “That’s exactly how it is, but I enjoy it. I wouldn’t change it.”

When NPC defending champ South Iredell came to Granite Quarry last Friday, East was given a fighting chance, but was the underdog. South Iredell had won against West Rowan in double overtime and had beaten Statesville. South Iredell was playing with a backup QB —  receiver Holland Dowdy was taking snaps — but coaches never rest easy when a receiver is running around with the ball. He might turn a busted play into 50 yards.

“We keyed all week on learning the routes their receivers ran,” Hinceman said. “They have a bowling ball running back, and we had to stop him. And we had to contain the quarterback. We couldn’t let him get outside on us. That was the biggest thing of all.”

It was an even first half. South Iredell was leading, 7-6, when Fitz called on Hinceman for a 26-yard field goal to close the first half. He made it. East led 9-7.

East’s defense, with Hinceman all over the place, pitched a shutout  of the Vikings in the second half.

“Those points on the field goal before the half made everyone feel good in the locker room about being ahead,” Hinceman said. “Then we played really well in the second half on offense and defense.”

Early in the second half, East QB Logan Forbis hit Hinceman on a short route. He sprinted for about 30 yards after the catch on a 46-yard scoring play that gave the Mustangs a 15-7 lead.

“The key to that play was a great block that Sam Wall made for me,” Hinceman said. “Sam and I go back to first grade when we were wrestling teammates. Friends a long time.”

His focus now is on Statesville. The Greyhounds are coming to Granite Quarry on Friday. Both teams are 2-1, part of a four-way logjam in the six-team NPC. Statesville is young, but its team speed is amazing. It’s supposed to be wet on Friday. Hinceman is optimistic that will slow Statesville down.

If East does find a way to beat Statesville, the Mustangs should be at least conference co-champions. East hasn’t been a conference champ in football since sharing the South Piedmont Conference title with A.L. Brown and Concord in 1997.

“I know it’s been a long time,” Hinceman said. “But we’ve made a comeback. We’ve won two big games. We’ve put ourselves in a good situation.”

Salisbury tennis has close one, but prevails in 2A…