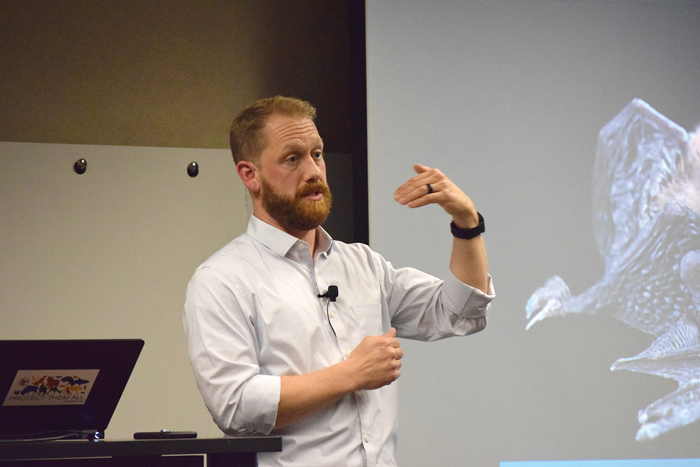 Submitted photo Ben Prater discusses the impact of the Endangered Species Act at Catawba College's Center for the Environment.

The Endangered Species Act has sheltered native plant and animal life in the Unites States for nearly 50 years, but now it’s in need of saving.

That was the message from Ben Prater, Southeast program director for Defenders of Wildlife, last Thursday night at the Center for the Environment at Catawba College in discussing the legacy of the landmark law and its uncertain future.

Prater is a graduate of Catawba and was involved in the construction of the Center for the Environment as a student. John Wear, founder and executive director of the center, called him a “career conservationist.” Now, Prater heads the southeastern field office of Defenders of Wildlife, a nonprofit organization that seeks to preserve endangered species through outreach, laws and other measures.

The Endangered Species Act is the pre-eminent environmental legislation that has come under fire in recent years from national leadership. Without it, many keystone species — those that keep their ecosystems healthy and thriving — could be in danger of severe habitat loss or extinction, advocates say.

“We are in some challenging times,” Prater said.

He set out to “bust some myths” about the law, as well as talk about its past. The very nature of the law, he said, is a hopeful thing.

“The fact that Congress thought to pass this act speaks to the social climate of our nation and our rejection of the ‘consume and throw-away’ lifestyle,” he said. “The ESA really covers a wide gamut of values.”

Opponents of the statute recently have spread falsehoods about it, Prater said, seeking to weaken public support and undermine its strength.

One common myth is that the law is ineffective — something that is patently untrue, Prater said. According to studies, the law has been 99 percent effective, and very few species have been de-listed because of extinction.

“More have been de-listed due to recovery,” Prater said. “These iconic animals are thriving.”

Opponents also say the law is a waste of taxpayer money. In reality, less than 1 percent of the federal budget goes to conservation efforts — and even less of that goes to the the Endangered Species Act, Prater said. In fact, he said, the bill is almost criminally underfunded.

“As a country, we could do better,” he said.

Another false statement is that the law is bad for the economy, he said. This assertion ignores the billions that Americans spend on outdoor leisure each year, Prater said, including visits to national parks and wildlife observation areas. Wolf watching in Yellowstone National Park alone brings in $35 million annually to the local economy, he said.

“The truth is, protecting wildlife can be a valuable boost to the economy,” Prater said.

He cited other common myths about the burden on states and landowners and false claims that the law prompts frivolous lawsuits. None of that is true, Prater said.

The law is the most effective piece of environmental legislation in the nation’s history, Prater said.

The extinction of species and loss of habitats can have devastating effects on soil, water and air quality, as well as on food production and the economy, he said.

“Each plant and animal is an integral thread in the web of life,” Prater said.

Prater said members of the current Congress have proposed more than 100 bills and amendments designed to weaken and undermine the law. Leaders of the Department of the Interior have tied the hands of federal agencies and sought to interject economics into purely scientific decisions, he said.

But thanks to individuals, lobbyists and organizations like Defenders of Wildlife fighting back, most of those bills and other anti-ESA provisions have failed.

The fight is ongoing, and Prater encouraged people to support organizations, speak to their representatives and use their voice to preserve a law that, he contended, preserves America the beautiful.

“The future of our plants and wildlife is, ostensibly, in your hands,” he said.