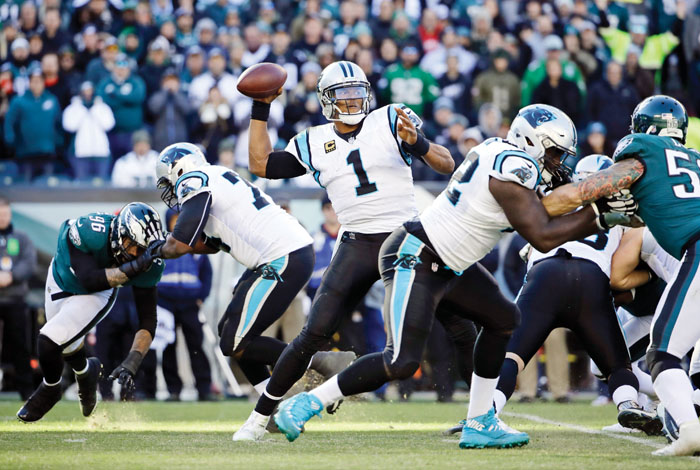 FILE - In this Sunday, Oct. 21, 2018, file photo, Carolina Panthers quarterback Cam Newton (1) throws a pass during an NFL football game against the Philadelphia Eagles in Philadelphia. Newton and the Panthers are proving you don’t have to throw the ball deep to win games in the NFL. (AP Photo/Matt Rourke, File)

CHARLOTTE (AP) — Cam Newton and the Panthers are proving they can win without throwing the ball deep down the field.

The 2015 league MVP has attempted 16 passes — and completed just three — that have travelled longer than 20 yards in the air this season, according the NFL’s Next Gen stats. That’s far fewer than most other NFL quarterbacks. Kansas City’s Patrick Mahomes, for instance, has completed 17 of 42 passes beyond 20 yards, with eight of those going for touchdowns.

Newton said the lack of vertical passing game isn’t something he’s concerned with entering Sunday’s home game against the Ravens (4-3), especially with his team 4-2 this season.

“When you are moving the ball, people say why aren’t you taking many shots downfield?” Newton said. “When you take too many shots downfield and it’s not there and you start forcing the ball, they say why can’t you protect the ball? So our thing is we turn our ears to mute and take what the defense is giving us. When we have opportunities to take shots down the field trust and believe nobody loves touchdowns more than I do — and if it’s there I’m going to take it.”

Added Newton: “If not, you just live to fight another day.”

Coach Ron Rivera likes that approach, saying he is just fine with how Newton is playing. Newton has completed 11 touchdown passes this season and has four interceptions and has a solid 94.7 QB rating.

“I think the quarterback is very efficient with (the ball) right now,” Rivera said. “There’s no reason to panic.”

The formula seems to be working for the Panthers, who are winning games behind Newton’s heroics.

Three weeks ago against the Giants the eighth-year QB rallied Carolina back in the final seconds, leading a drive that set up Graham Gano’s winning 63-yard field goal. This past Sunday Newton brought the Panthers back from a 17-0 deficit on the road against the Super Bowl champion Eagles with three TD drives to finish the game, earning him his 10th career NFC Offensive Player of the Week honor on Wednesday.

Rivera said when the game is on the line Newton has the same mentality as Michael Jordan, a six-time NBA champion who many still consider the best basketball player of all time.

“He’ll come up and say, ‘Put it in my hands, coach. Trust me,’” Rivera said of Newton. “Michael Jordan used to say, ‘Certain guys want the ball when it’s crunch time. Other guys just don’t seem to come off the picks the way they’re supposed to.’ I’ve told that to Cam, and Cam has always wanted the ball.”

Although the Panthers still looking stagnant at times on offense — including the first three quarters against the Eagles when they managed just seven first downs and no points — Newton seems adjusting well to new offensive coordinator Norv Turner’s scheme, which features more check downs and screen plays than the Panthers have typically run in the past.

“When we get into the logistic things of football, and what the defense is giving and what they aren’t, you can’t just go down and chuck the football downfield and just expect, ‘Well, we didn’t take shots in the game,’” Newton said. “That’s not what good teams or offenses do. We don’t let the defense dictate to us, we dictate to the defense. So that’s been our approach.”

With the emphasis focused on shorter routes, Newton is completing a career-high 65.6 percent of his passes, well above his career average of 58.9 percent.

So while Newton says he likes the big play as much as anyone, he seems fine with Turner’s philosophy — as long as the Panthers are winning games.

“Whatever Norv and his offensive staff calls it’s my job as the quarterback to execute it,” Newton said. “If I see anything otherwise, it’s my job to make the proper audible. If not, then run the play.”