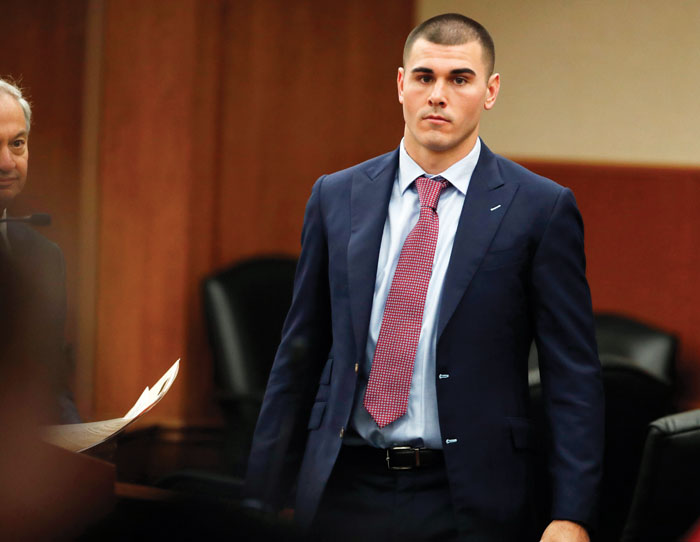 ENGLEWOOD, Colo. (AP) — Chad Kelly’s short stint as the Denver Broncos’ backup quarterback is over, and his former teammates and ex-coaches are trying to ignore the distraction of his dismissal while keeping him in their thoughts.

The Broncos waived the second-year pro Wednesday, a day after he was arrested on suspicion of criminal trespass after being accused of entering a couple’s suburban home uninvited.

General manager John Elway huddled with coach Vance Joseph and team President Joe Ellis and “we agreed that releasing Chad was the right thing to do,” Elway said.

“Even though Chad’s no longer part of our team, we’ve offered to help him however we can and are supportive of him in every possible way,” Elway added.

Joseph said after practice Wednesday that following many hours of meetings with Kelly and conversations with one another, the trio “thought it was the best thing for the Broncos — and for Chad” to waive him.

“As a friend, man, I’m hurting for him,” starting quarterback Case Keenum said.

Joseph insisted the drama won’t affect the Broncos (3-4) on Sunday at Kansas City (6-1).

“We have a great locker room. We have a close-knit football team and their focus is the Chiefs,” Joseph said. “They all feel bad for Chad. They will support Chad as their former teammate. But we have one focus and that’s the Chiefs on Sunday morning.”

Cornerback Chris Harris Jr. termed it a “season-changing game” and said, “if you’re not focusing on that, all of this other (nonsense) that’s going on, you’re missing the big point of this game. This is a big game to change our season and get us back rolling.”

Before a court appearance Wednesday, Kelly drove up to team headquarters in a white SUV and sprinted in and out of the building without stopping to answer questions. He also declined to comment outside court shortly before the Broncos announced his dismissal.

He stood silently next to his lawyer, Harvey Steinberg, during his appearance at Arapahoe County District Court, where his next appearance was scheduled for Nov. 8. Steinberg declined to comment on his way out of the courtroom and again when reached later by the AP.

Kelly attended an annual Halloween costume party hosted by Von Miller in suburban Englewood on Monday night. It was after that party that Kelly found himself in trouble.

According to court records, a couple reported that a stranger entered their Englewood home after 1 a.m. Tuesday, sat on their couch and was “mumbling incoherently.” Police say they found the 24-year-old Kelly afterward parked nearby. The man identified Kelly as the intruder and provided surveillance video to police.

Police and court records do not address Kelly’s physical state at the time, and there is no mention of testing for alcohol or substance use. Police said officers made the arrest “without incident.”

Kelly was released from jail Tuesday on $2,500 bond.

Social media clips from the Halloween party put two other Broncos under scrutiny: Receiver Emmanuel Sanders dressed up as the Tyrone Biggums character from “Chappelle’s Show” and put some flour on his face to mimic the cocaine the character was famous for, and linebacker Brandon Marshall was shown holding up a bag of flour to impersonate ‘80s R&B star Bobby Brown.

Joseph grew irritated when answering a question about that party, which he called “a private, team function.”

“It was a party. You know, players have parties. So, I don’t have an opinion about that. It was organized and it was safe. It was a team function,” Joseph said. “Our guys have dinner every Wednesday and Thursday night and no one cares about that. OK, so again, our focus is on the Chiefs, and that’s it. Not a Halloween party. Are we kidding? It’s nonsense. It is.”

Kelly, who earned the nickname “Swag” in college and burnished it with terrific performances in the preseason, ended up playing just one snap for the Broncos, a kneel-down just before halftime against the Rams on Oct. 14 while Keenum was being evaluated for a concussion.

“He’s worked very hard to better himself as a man,” Harris said. “So, it’s unfortunate to see him have that downfall. But I think he can get back right and he’ll have another opportunity in the league.”

If he signs elsewhere, Kelly could still face a suspension from the NFL, which said Tuesday that it is reviewing the matter.

Elway chose Kelly with the final pick of the 2017 NFL draft after fellow Hall of Famer Jim Kelly personally vouched for his nephew, whose college career at Clemson, East Mississippi Community College and Ole Miss was marred by discipline problems and legal troubles.

That job now belongs to Hogan, a third-year pro acquired off waivers from Washington last month who was taken aback by Kelly’s dismissal.

“He was a great teammate in this locker room,” Hogan said, “and I know all the guys support him and hope all the best goes his way.”

No. 25 Appalachian State puts ranking on the line…