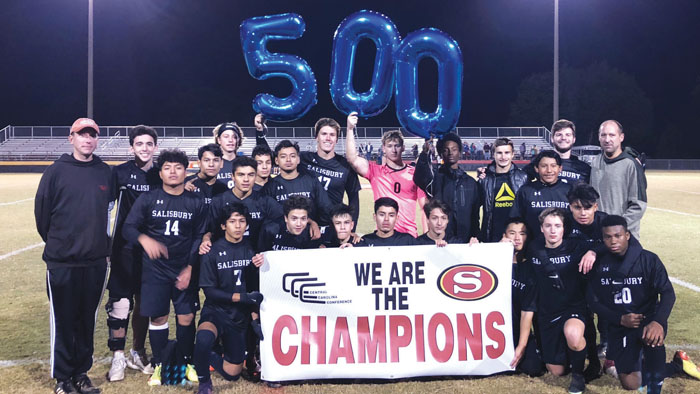 Salisbury’s soccer team  defeated South Rowan, 3-0, on Wednesday in the highly anticipated (and attended) rematch of a shortened, 1-all game, earlier this season.

The game was marred by eight cards, two on the Hornets, but saw three first-half  goals by the home team provide the margin of victory.  Senior Tony Figueroa scored twice after Eriq Argrett got the Hornets on the board in the ninth minute of the match.

Assists were credited to Jack Fisher and Christopher Portillo.

Salisbury got excellent play from Will Austin, Angel Quintero, and Arrawn Yang, particularly after multiple Hornet players had to leave the contest due to injury.

It was the 500th game at the helm for Salisbury boys and girls head coach Matt Parrish.

Next up is the final regular season match, a makeup match at Oak Grove today at 4 p.m.

Sebastian Trujillo scored for the Falcons.

Javon Smith had scoring runs of 9 and 6 yards in Carson’s 28-24 win against West Rowan on Wednesday.

Alex London threw a 58-yard TD pass to Jake Harris and ran for a 3-yard score.

Carson built a 28-0 lead before the Falcons staged a comeback.

The Knox touchdown came on a 35-yard run by JyMikaah Wells.

Wells scored two more touchdowns for the Trojans (5-2) that were called back by penalties.

The Eagles will finish the season on Oct 30  at Southeast at 4 p.m.

The South Atlantic Conference has six teams in the NCAA southeast regional rankings.  Wingate checks in at the top, while spots 4-6 are filled by Anderson, Lenoir-Rhyne, and Lincoln Memorial. Mars Hill and Carson-Newman round out the poll at No. 9 and 10.

Catawba improved to 9-1 at home.

Carson hosts Southwest Guilford in the second round of the 3A state playoffs tonight.

West Rowan hosts Asheville A.C. Reynolds tonight at 6 p.m. in the 3A West 8 vs. 9 matchup.

South Rowan plays at Forbush in the second round of the 2A state playoffs tonight.

Cost is $30 per participant.

Anyone interested in officiating in the Salisbury Parks and Recreation youth basketball league you must attend officials clinic starting on Sunday, Oct. 28, at 5  p.m. at Hall Gym.