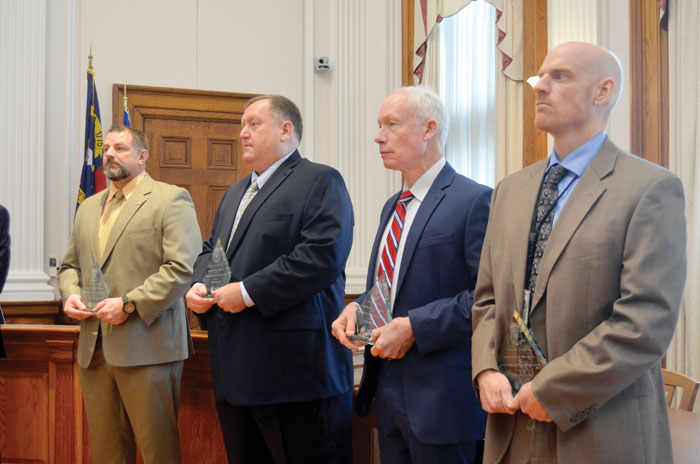 SALISBURY — Law enforcement investigators were recognized Tuesday for their efforts to investigate and prosecute cases of firearms trafficking, drug distribution and violent crime in Rowan County.

Matthew Martin, U.S. attorney for the Middle District of North Carolina, and Chris Healy, assistant special agent in charge of the U.S. Department of Homeland Security in North Carolina, spoke of the work done by local, state and federal partners who have helped make significant arrests since 2015.

One of those significant arrests was in March 2017 at a mobile home on Artz Road. The case, which had ties to the Aryan Brotherhood and Mexican drug cartel, led to the arrest of 31 people. Authorities determined large amounts of methamphetamine ice and, on some occasions, heroin were being transported from Mexico to California, Washington state and North Carolina for distribution.

The case and others were investigated through partnerships of local, state and federal authorities.

“These partnerships are to keep everyone safe so every neighborhood in Salisbury, every person can get the public safety they deserve,” Martin said.

Healy said several violent gang members were arrested on charges of firearms trafficking, drug distribution and other violent crimes in Rowan County. The offenders have been sentenced or have cases sentences pending.

“This investigation has made a significant impact in the drop in violent crimes, not only in Salisbury but across Rowan County — in the end, making the communities a safer place for all citizens to work and live,” Healy said.

The investigation was initiated in 2015 as part of a drug enforcement task force that received federal funding from the U.S. Department of Justice.The case involved multiple agencies that work together to dismantle gang and drug trafficking operations, said Deputy Chief Ramsey.

The case crossed many boundaries and included suspects connected to the Aryan Brotherhood and the MS 13 and Blood Nation gangs.

The case had national impact, he said, because investigators were able to dismantle a significant drug operation that crossed the United States.

Ramsey said the honor is important to the Rowan County Sheriff’s Office because of the various partnerships with local, state and federal law enforcement, including the Department of Homeland Security.

“A lot of these bigger cases couldn’t be done without these partnerships in place,” Ramsey said.

“A lot of these people have violent criminal records, and it basically makes these communities a lot safer,” he said.

“This is really about leadership; it’s about the leadership of our sheriff, Kevin Auten,” Edds said. “We appreciate him, the community really appreciates him. The community’s been very clear about what they expect from leadership in Rowan County, and that is they want to feel safe. Crime has been an issue here like it has across the country in the past couple of years, and so we’ve taken that very seriously.”

Edds said Auten and the men and women who protect the county deserve a tremendous amount of credit.

“I’m very thankful for them, and our community should be as well,” Edds said.

A photogenic kindergarten couple reconnects, dances toward their 2019…