A photogenic kindergarten couple reconnects, dances toward their 2019 wedding 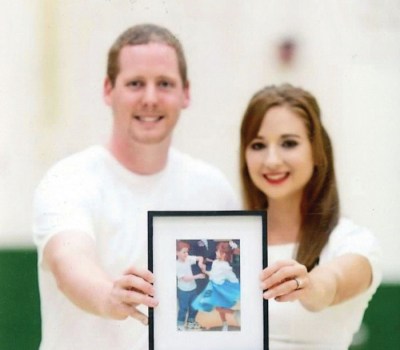 Justin McDaniel and Tara Safrit hold a newspaper photograph taken of them dancing at an Isenberg Elementary School sock hop when they were in kindergarten. The couple are now engatged to be married next year. Photo by Susan Hayes 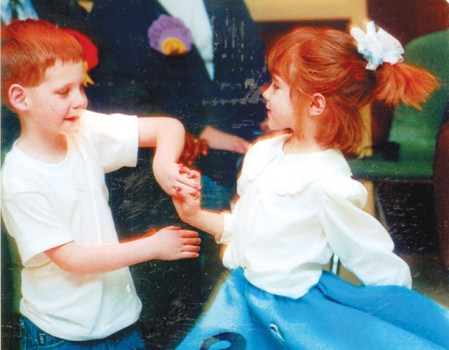 In this photo from March 14, 1995, Justin McDaniel twirls his dancing partner Tara Safrit during a 1950s-themed sock hop at Isenberg Elementary School. The picture appeared in the Salisbury Post. Twenty-three years later, McDaniel and Safrit are engaged and plan an April 12, 2019, wedding. 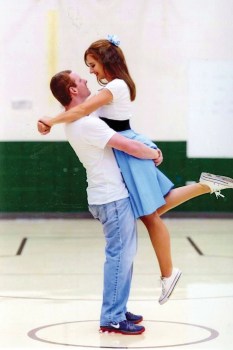 Justin McDaniel and Tara Safrit donned 1950s-style attire, went to Isenberg Elementary and relived a sock hop photo taken of them in 1995, when they were in kindergarten. The couple are engaged. Photo by Susan Hayes

SALISBURY — In kindergarten at Isenberg Elementary School, Tara Safrit and Justin McDaniel were smitten with each other.

Justin remembers giving Tara a pair of earrings on her birthday. And Tara reminded Justin recently that he tried to present her with his grandmother’s diamond ring, though luckily their families nixed that gesture.

“I was his little girlfriend,” Safrit recalls. “He kissed my hand every time the teacher looked away.”

Salisbury Post photographer James Barringer captured the two dancing at a 1950s-themed sock hop at the school. Justin was wearing a white T-shirt and jeans with rolled-up cuffs. Tara sported a blue poodle skirt with a big letter “B” on one of the front folds.

Their picture was displayed prominently in the March 14, 1995, edition of the Salisbury Post. On a copy of the newspaper clipping her family saved, Tara wrote in crayon at the top, “I love Justin M.”

Tara explains today she included the initial “M” for his last name because she didn’t want there to be any confusion with her brother, whose name also is Justin.

Her clipping found its way into a drawer and other copies into family scrapbooks. By first grade, the kids’ romance hit the rocks. Justin’s family moved, and he started attending Granite Quarry Elementary.

It’s a longer story, for sure, but if you fast-forward to today, Tara Safrit and Justin McDaniel are engaged to be married. The wedding date is set for April 12, 2019, at a venue in Linwood.

Tara is doing most of the wedding planning, but one of the first things she wanted the couple to do was re-create the kindergarten photo from 23 years ago. She envisioned them dressing up in 1950s clothes again and returning to the multipurpose room at Isenberg Elementary where the sock hop took place.

First of all, she didn’t know how the staff at the school would react to their request.

“I figured they would have a problem with it,” Tara says.

But there was no hassle, and close to Labor Day weekend, Tara and Justin traveled to the school with their photographer, Susan Hayes, and took several pictures in the multipurpose room — both posed and dancing.

Justin was back in his white T-shirt and jeans. Tara had a powder blue poodle skirt she ordered from Amazon. This one had an actual poodle on it instead of a “B.”

Justin says he was all for the idea, and he easily recalls the newspaper photograph and clipping from a couple of decades ago.

“I remember going back to school the next day and several teachers pointing it out,” he adds.

Since their engagement and maybe before that, going back to Isenberg to relive the sock hop had been on the couple’s minds.

The idea’s execution happened pretty quickly when they made it a priority.

Tara is the daughter of Bobby and Betsy Safrit. Justin is the son of Jeff McDaniel and Jennifer Cekada and the stepson of Emil Cekada.

The families stayed loosely aware of each other through the years, mostly because Tara’s dad was a paramedic and Justin’s mom, a nurse.

After high school, Justin went on to major in business and finance at the University of North Carolina at Charlotte, and today he works for the Wells Fargo corporate office.

Tara graduated in early childhood education from Catawba College and is a teacher’s assistant at Hurley Elementary School.

It was five years ago that the kindergarten couple reconnected.

“Facebook, of all things, brought us together,” Tara says.

The couple have a disagreement over who reached out to whom.

“It was his idea to reconnect,” Tara says.

No matter, the kindergarten romance rekindled, and it was during a trip to Biltmore Estate in Asheville earlier this year that Justin popped the question.

After they marry, Tara says they might try to buy a house in Concord, getting Justin closer to work. They also hope to travel some.

Somehow, when they were kids, the earrings Justin had given Tara for her birthday were returned to him, and he kept those earrings all those years they were apart.

The earrings are back with Tara, who will tell you one thing: “I love Justin M.”