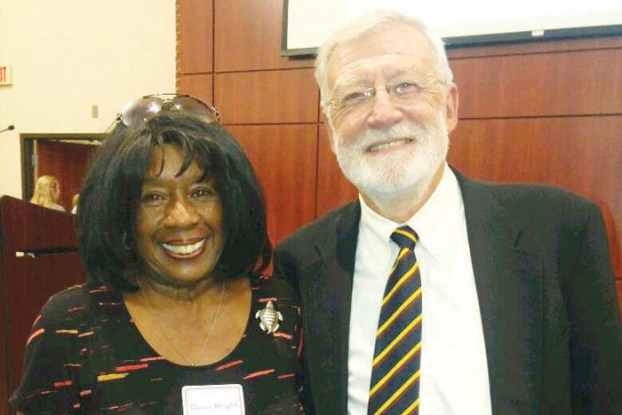 DeeDee Wright of Salisbury stands with Wayne A. Wiegand, author of 'The Desegregation of Public Libraries in the jim Crow South.' Wright was honored recently as a member of the 'Greenville Eight,' whose sit-in and arrest at the Greenville (S.C.) Public Library in July 1960 helped in leading to the desegregation of the library. Wiegand gave a presentation Oct. 3 at Furman University. Mark Wineka/Salisbury Post

DeeDee Wright recalls the time when the ‘Greenville Eight’ were arrested, not celebrated

SALISBURY — DeeDee Wright is nearing completion of a book she has been writing, mostly about her efforts fighting for civil rights in the South and, in particular, Greenville, South Carolina.

On July 16, 1960, a teen-aged Wright was arrested with seven other African-Americans, including a young Jesse Jackson, for staging a sit-in at the Greenville Public Library, which in those days didn’t fully embrace the word “public.”

The main library branch was all-white. The sit-in lasted 40 minutes. The library director called the police, who charged the sit-in participants with disorderly conduct and hauled them off.

They became known as the Greenville Eight.

In the days and weeks to follow, Wright, who was president of the NAACP Youth Chapter, participated in lunch counter sit-ins, wade-ins at Greenville’s all-white public pool and even pray-ins at white churches.

Several “public” places and stores closed or turned off the lights in sections reserved for blacks rather than face integration. The Greenville City Council voted to shut down both the main library and its black counterpart, the McBee branch.

“The efforts made by a few Negroes to use the White library will now deprive White and Negro citizens of the benefit of a library,” the mayor told the Greenville News, whose style it was to capitalize “white.”

“This same group, if allowed to continue in their self-centered purpose, may conceivably bring about a closing of all schools, parks, swimming pools and other facilities. It is difficult to see how such results could be of benefit to anyone.”

But by the morning of Sept. 19, 1960 — under the threat of the NAACP’s federal lawsuit in which Wright was listed as a plaintiff — all city libraries quietly reopened.

“The board of trustees, with the approval of the City Council, has ordered the city libraries opened,” the mayor said. “The city libraries will be operated for the benefit of any citizens having a legitimate need for the libraries and their facilities.

“They will not be used for demonstrations, purposeless assembly or propaganda purposes.”

If you read between the lines, the mayor was saying the city’s libraries were now integrated. It was a beginning, a pivotal point in the city’s race relations history.

“From there,” Wright said, “the barriers were slowly, slowly removed.”

Today, the Greenville Eight are celebrated, and Wright recently was invited to attend a Greenville County Library program at Furman University titled “Desegregation in Greenville: The Public Library Story.”

The guest speaker was Wayne A. Wiegand, author of the book “The Desegregation of Public Libraries in the Jim Crow South.”

A section in the book is devoted to the Greenville Library story.

Wright and two other members of the Greenville Eight attended the program at Furman, and they were given a chance to make remarks to the crowd of about 250 people.

“I told them that … it solidified for me that what we were doing was the right thing to do,” Wright said.

In fact, that will be the title of her book: “I Did the (W)right Thing.”

Wright would continue to be active in civil rights matters in New York and later as a Clark College student in Atlanta. She would be arrested at least a half-dozen times and spend a night in jail in Columbia, South Carolina, after a demonstration.

As for her first arrest in Greenville, Wright said it was planned. “We wanted the arrests so it could be a test case,” she said.

The Greenville Eight had their mugshots taken and were fingerprinted, but they were detained for only 45 minutes, thanks to being released on property bonds.

At a court hearing the next day, a judge decided to postpone any action — the cases were never tried — and Wiegand says about 75 black spectators then left the courtroom to demonstrate at three lunch counters.

They were turned away at all three.

Wright said her arrest and role in subsequent demonstrations wreaked havoc for her family. She and her mother received threatening telephone calls, and their fear was enough that they eventually relocated to New York, where Wright’s sister was living.

“You should have seen the college students,” Wright said, recalling their reactions. “Their eyes were just as wide as you could believe.”

Wright said the Furman program included a mixed audience of faculty, students and library supporters. “It was really a warm evening,” she said, and it continued the kind of receptiveness the Greenville Library system has given members of the Greenville Eight for many years now.

On the 50th anniversary of the sit-in, the library held a celebration and issued honorary library cards to Wright and the others.

About three or four years ago, Wright traveled to Greenville to attend an exhibit at the library about those days of library sit-ins and other civil rights demonstrations.

She realized the hotel she was staying in was on the site of the old city jail, where she was taken after her arrest.

“In retrospect, it was scary,” Wright said of the times, “but I guess young people have no fear.”

Wright knew Jesse Jackson personally. During the Greenville Eight sit-in, he was home that summer from college.

“We all grew up together,” Wright said.

The Greenville protests in this era generally were not marked by violence, Wright said. Among blacks, voter education was the strong emphasis then. But the demonstrations became testy enough that the city imposed a 9 p.m. curfew for about a month during the summer of 1960.

The Greenville News described the eight who participated in the library sit-in on July 16, 1960, as “neatly dressed” and noted that five of the eight were women. The News said their bonds were paid by Jackson’s clergyman.

Wright and the others were all identified in the newspaper, and two photographs were published of the students waiting to be released at the police station.

On Sept. 18, 1960, the News published a letter written by Dorris Wright — DeeDee Wright’s given name — and in it she pointed out several inequities between the white main library and the McBee branch for blacks.

Wiegand mentions the letter in his book.

“The separate but equal principle is very expensive,” Wright wrote. “Integration of the libraries is not only morally right, but it is also less expensive as well.”

That next morning, the libraries were reopened to all.

Wright has a framed copy of her arrest mugshot from Greenville in her Salisbury home. And she says the Greenville Eight have made it a point not to have their arrests expunged from the official record.

They don’t want to erase history.

By Mark Wineka mark.wineka@salisburypost.com SALISBURY — Dr. Karl Hales has never been at a loss for words. He couldn’t afford... read more