Salisbury tennis has close one, but prevails in 2A playoffs 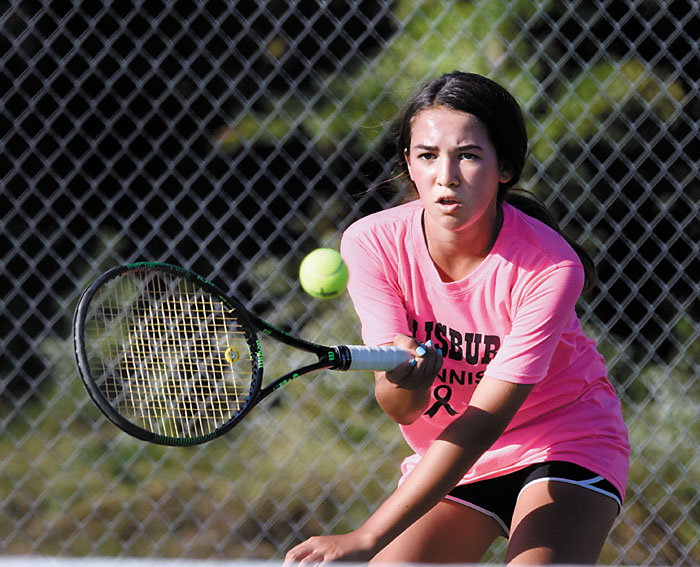 SALISBURY — Like any good drama, Salisbury’s fate in the 2A state playoffs wasn’t revealed until the final scene Tuesday night.

The Hornets — with two of their top six players sidelined by the end of the match — needed a molar-grinding victory at second doubles to secure a 5-4 second-round victory against visiting East Montgomery.

“It seems like we can never get a break here,” exasperated coach Milton Griffith said after the defending state champion advanced to Monday’s quarterfinal round against Surry Central. “It seems like we’ve been getting sick and hurt all year long. Yet we keep pulling through.”

Salisbury (20-1) has now watched two of its post-season adversaries fall — and it is still standing. The Hornets prevailed when the freshman tandem of Margaret Thurman and Sophie Chmiel, playing together for the just the second time all season, earned an 11-9 triumph over East Montgomery sophomores Hannah Moore and Yaricel Salazar.

“You’re always nervous, knowing you can win it or lose it at any time,” said Thurman. “It’s stressful, but that just makes you play more carefully.”

“Yeah,” Chmiel added. “And when you play careful, a lot of times you make mistakes.”

The second-doubles showdown was initially slated to include Salisbury’s Thurman and Skye Mowery. But Mowery, the Hornets’ lone senior, aggravated a right shoulder injury in her exhausting 6-2, 3-6, (14-12) loss to Moore at fourth singles, forcing Griffith to reshuffle his doubles lineup. He was already missing first-singles player Emma Nianouris, whose been sidelined more than a month with an illness and a wrist injury. “Nothing’s come easy this season,” Griffith said. “We just keep pushing.”

Mowery, who qualified with Thurman for this weekend’s state doubles tournament in Cary, struggled to finish her match.

“I had such a tough time,” said Mowery. “It was definitely hard to to keep calm and push through it. Instead of hitting winners, I was just trying to place the ball in the corners on her backhand side. That’s how I won the second set.”

Mowery believes it was a sore — not torn — labrum in her right shoulder that forced her to withdraw. She was still sporting an ice pack when Griffith substituted freshman Sidney Hlavacek to team with Sutton Webb at No. 3 doubles and moved Chmiel to second. The Hornets won easily at third, 10-1, and when teammates Meredith Burton and Abby Campion were bested 10-4 by Elana Kellis and Mary Beth McCaskill at first doubles, Salisbury’s season — and its reign as state titleist — rested with Thurman and Chmiel.

“That was a really good fight,” said East coach Amanda Watson, a former Catawba softball player. “Overcoming injuries is always going to be tough. I’ve had to throw out a few forfeits this year. You hate to do it.”

Salisbury avoided that fate by moving a player up, not down, in its rotation. “My concern was would we be able to adjust our lineup,” Griffith said. “The rules state once you turn in your doubles alignment, that’s it. But you can move somebody up. You can’t drop a better player down.”

It worked out for SHS when Thurman and Chmiel persevered in a 10-point pro set. They squandered their first chance to finish it after taking a 9-8 lead. “Then we were up 40-15, but couldn’t put them away,” Chmiel said.

Moments later Chmiel’s forehand shot was returned out of bounds, clinching what turned into a three-hour-and-forty-minute day-night spectacle.

“I was scared when I got moved up,” Chmiel noted. “I knew we needed two doubles wins and I was afraid I wasn’t going to be able to do it. It’s hard to play under that kind of pressure.”

Perhaps Thurman said it best, just seconds before a shooting star illuminated the night sky. “We really, really wanted to win,” she said. “And somehow, we did.”

The teams split the six singles matches. Kellis, McCaskill and Moore won for East Montgomery (11-3). At third singles, Salisbury’s Campion won 6-2, 6-1 over Salazar. “I played a lot better than I did last week,” Webb said. “She was good at bringing me to the net, making me run. Today I handled it better.”

Chmiel prevailed 6-3-6-3 over EM’s Allison Burr at No. 5 and Webb topped McKinley Baker at sixth singles, 6-2, 6-0. “I actually lost the first game,” Webb said. “I was hitting into the net a lot. I hadn’t found my groove yet, but eventually I did and beat her with good shot placement.”

Surry Central (16-1) advanced with a 7-2 victory over Oak Grove, it’s 15th straight win. Salisbury has won seven matches on the bounce and will host on Monday, through Griffith is unsure if Mowery or Nianouris will be available.