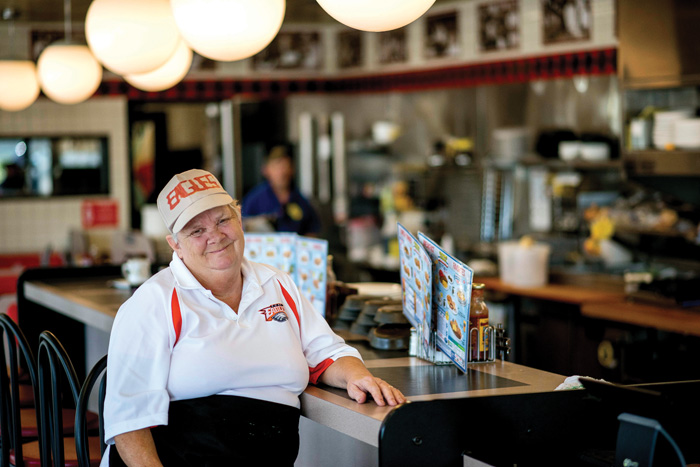 SALISBURY — It’s the middle of the afternoon on a Friday. Four booths are occupied by all sorts of people: a well-dressed woman with her elderly mom, a young couple, a truck driver grabbing a quick cup of coffee, and a reporter and photographer.

JoJo Bostian steps to the designated tile in the floor and calls out, “Pull one bacon!”

She’s wearing an Eagles ball cap and shirt and sports a day-glow Band-aid on her index finger. It’s dress-up day for Waffle House employees, and JoJo is dressed as an Eagles fan.

No one else remembered to dress up, but it doesn’t bother her. It’s a day off from the company uniforms. She has a closet full of them.

As a 30-year employee, Bostian has been through the hats, the aprons, all the colors of uniforms: orange, purple, blue, gray checkered.

She was working second shift on this day, which she calls “the everything shift.”

She’s worked them all. She worked third shift for 13 years and first for a few.

“Waffle House is my family. I married my husband here three years ago. Nov. 1 in the old location. We got married right there,” Bostian says. “All the employees got together and decorated it up for me. One made a balloon archway. And my son walked me from the back hall out here.

“If it wasn’t for Waffle House, I wouldn’t have my house. I took all my stock out. I had enough for a down payment on a house.”

Bostian works all the holidays.

“Christmas is nonstop in here. It’s the busiest day of the year for Waffle House. Believe me, it’s nonstop. Usually your traditional customers come in on Christmas Day. They have to wait a little while, but they don’t mind. ‘We’ve got to go to Waffle House.’ We all enjoy it.

“Like I say, we’re family because of teamwork. If we didn’t work as a team, we wouldn’t succeed. I’m including bosses, employees, everybody.”

Bostian explains the mystery of calling orders to the cook.

“There’s a square in the floor. One block to call orders. It’s a whole lot easier than it used to be.”

In the past, waitresses called out the entire order, including eggs and waffles. Now they call out “bacon” or “waffles,” but they place clues on a plate for the cook for the remainder of the items. A pack of jelly on a plate indicates eggs. Mayonnaise is for a hamburger patty. Ketchup indicates sirloin. Ketchup and pickle mean sirloin sandwich.

The system is known as “markers,” and it makes things easier for the wait staff and cooks alike.

Bostian’s title is “master grill operator” but she knows how to do most everything at Waffle House. She helps new employees get started.

A 24-hour restaurant can attract all kinds of people, but Bostian has never really been afraid.

“Not really. We had one guy in Virginia, our truck hadn’t come in and we didn’t have any to-go plates, so he busted a window. But I wasn’t really afraid.”

“If there’s a problem, you step away and let the manager know.”

Cooking for Waffle House is a special skill.

“Three busloads of German people came in. The three drivers were the only ones who could speak English. They filled the whole restaurant, and we only had two on staff. The manager came out and helped. They ordered pork chop dinners and wanted their salads right away.”

The best day for Bostian is when everyone lends a helping hand. Teamwork makes the day go faster.

“Folks who don’t chip in and help out usually don’t last too long,” she says.

The biggest challenge may be when there’s a language barrier. Bostian copes by listening carefully.

“The picture menu helps. We can usually make out what they want if we slow down.”

She reflects on who’s been in during her shifts.

“Race car drivers, baseball players, politicians – I treat them all the same. I treat people the way I want to be treated.”

She smiles as she remembers a miniature wrestler who came in when she worked in Virginia.

“His bodyguard had to pick him up and put him on the stool.”

Bostian has served people from Ireland, Asia and Australia.

“People from up north don’t know what to expect. We just treat them like family. They ask what’s good, and we tell them.”

She recommends the chicken salad sandwich.

Bostian often works double shifts. She recalls one time when she worked Christmas Eve second and third, then Christmas Day first and second. There was a walkout in Clemmons, and they were short-handed. Bostian lent a hand.

At 62, Bostian sometimes thinks of retirement.

“I will work on my house some, but I ain’t going to stay retired, ain’t no way. I’ll probably still work a couple days a week.”

She smiles her infectious smile and shakes her head.