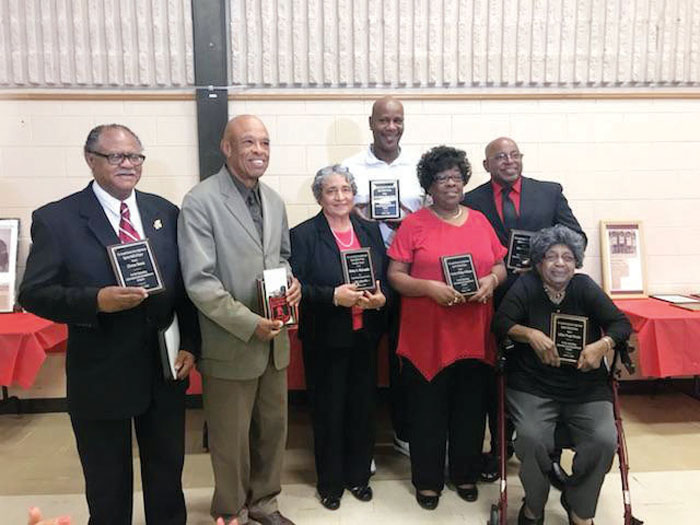 SALISBURY — The J. C. Price High School Sports Hall of Fame held its 12th annual banquet on Oct. 7, at
the Salisbury Civic Center. An overwhelming crowd of over 180 people were in attendance to witness the induction of six new members.

Larry Boyd ’67 of Frederick. Md and Shirley Holt Reddick ’62 of Salisbury, were unable to attend.

The program opened with the singing of the school song, “The Black and Red,” led by Phyllis Partee, class of 1966.
This vibrant signing set the tone for the high spirits throughout the evening. After introducing the Sports Hall
of Fame committee, chairman Carl Marlin introduced each inductee.

Many recipients gave remarks, highlighting their sports career at Price, and were appreciative of being selected.
Phillips said, “by being inducted I am now part of the rich history of Salisbury and Price High School.”

Hopkins spoke of his amazement of being chosen and what an honor it was for him. After
Hopkins’ remarks, he and committee member Earl Blakely elated the crowd by lining up against each other in
a 3-point stance.

“The sports banquet is a fantastic event and I am meeting a whole lot of friends I haven’t seen in a long time,
so this is very enjoyable,” said Howie. His father, James Howie, was also an outstanding football player
for Price during the late 1940s and early 1950s.

Other recipients were so proud that they could only say “thank you, so very, very much.”

Another highlight of the program was the presentation of the Founders’ Award which recognized the late
Rufus Little, John Mackey and Fred Evans. Before his presentation, Fredrick Evans praised the
committee for their continuation of the Sports Hall of Fame and noted that Price High School is the only
African American high school in the Salisbury-Rowan area that has their own Sports Hall of Fame
recognition banquet.

The 2018 Founders’ Award was presented to Shirley McLaughlin ’63, president of West End Pride. With
her leadership, McLaughlin and her group continue to work diligently for the beautification and improvement of the
West End.

Some projects for West End Pride include a community garden, voter registration drive and
clean-up campaign with Livingstone College students. McLaughlin thanked the committee and said, “as a
working group, we continue to improve our neighborhood. We feel it is special because of its black history
and, of course, Price is a major part of this Black history legacy.”

To be a recipient of the Founders’ Award, a person must be a graduate of Price and have made a contribution to
the community.

Sixteen former recipients of the sports award were recognized and each one mentioned some aspects of their
unforgettable experience at Price. Curtis Miller ’66 proudly said he would always attend this program, while Jimmy Poag ’64 said, “I
come every year.”

Each year those who attend the banquet are treated to committee member Wayne Woodruff’s collection of
Price High School memorabilia. He filled four tables with items that represent the school’s success in
academics and sports throughout the years.

After the meal, Marlin gave statistics of some of Price’s teams, thanked those in attendance and told them how
proud it is to see Price’s Coach Spencer “Prof” Lancaster’s name among several coaching legends of
Salisbury, found in the Salisbury High School’s Ludwig Stadium.