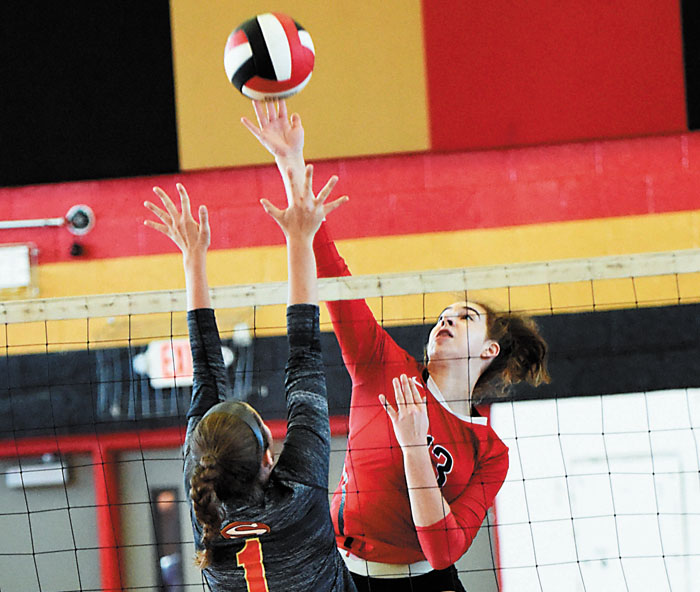 Wayne Hinshaw FILE/for the Salisbury Post ... South Rowan’s Kira Rymer, right, shown in an earlier match against Salisbury, turned in 17 kills on Tuesday, leading the Raiders past Lake Norman Charter in the state 2A playoffs in Landis.

The Raiders are coming at you right down the middle with Janiya Downs or Kira Rymer.

“It’s our big strength, but it’s also our big weakness because so many of our kills are in the middle,” South coach Jenna Horne said. “Teams talk. Everyone knows about our middles. Everyone knows we’re going to hit the middle and tries to prepare for it. We really want to mix it up more.”

Seeded 21st, Lake Norman Charter obviously was prepared, virtually ignored South’s outside hitters, threw the kitchen sink at the middle, and put up a whale of a fight. South Rowan, seeded 12th, still posted a sweep at home in the first round of the 2A state playoffs on Tuesday.

In a 25-22, 25-23 and 25-20 victory, Downs and Rymer, both about 5-foot-11, teamed for 33 kills. Rymer had 17, while Downs, the reigning Rowan County Athlete of the Year, had 16, They took turns dominating the action. Whenever South could execute smoothly on serve-receive, pass and set, the middle mashers usually made it pay off.

“At times, they were trying to triple-block me,” Rymer said. “It was hard to hit through that, but I was able to put  a lot of dinks over them. Fortunately, we kept our energy up. We really wanted to win this one for our seniors.”

Momentum is everything in volleyball, and the way the first set ended was the key to the match. Lake Norman Charter was up 22-16, and South appeared to be in serious trouble, but the Raiders calmly came back one point at a time. Rymer won four straight fights at the net against multiple people, including 6-2 Pearce Augier, as South got even at 22-all.

Ashlyn Faw’s ace, a stuff block by Rymer, and another Faw ace finished off the visitors.

The Rymer cousins, junior Kira and sophomore Anna, share setting duties for the Raiders. Kira had 11 assists, while Anna had 19.

“This was one of those days we all played well under pressure,” Anna said. “At the end of sets,  the biggest points, that’s when we played our best.”

The second set was a struggle. It was 20-all when the Raiders finally took the lead for good on a Kira Rymer dink. Faw had another huge ace for 22-20, and South was on its way to a 2-0 lead.

“I was serving for some big points and was just trying to make sure I got the ball in when I got some aces,” Faw said. “We never really lost the momentum today. Taking that first set was such a boost for us.”

There was still a feeling in the gym that the teams were evenly matched. If Lake Norman Charter (13-9) could win the third set, it could still come all the way back.

“I really like volleyball and this will be the last year I get to play,” Downs said. “I didn’t want to lose my last match at home. I’m glad I was able to pick it up in that third set and help my team get to the second round.”

With South down 20-19, the Knights had two straight hitting errors. Madison Hallman served an ace to put the Raiders up 22-20, With Hallman serving, the last three points of the day came from Kira Rymer, two kills and a block.  Kira Rymer had only one hitting error on 32 attacks.

Payton Black had 14 digs, while Faw had 13 to lead South’s defense. Downs had four solo blocks.

For the Knights, Taylor Adelman, Makayla Martin and Liberty Harris stood out.

“Janiya and Kira got big points like they always do, and Anna Rymer came through with four key kills,” Horne said. “We didn’t play our best today, but the girls were good when they had to be. In our next match (at No. 5 Forbush on Thursday), we’ll have to be good from the start.”