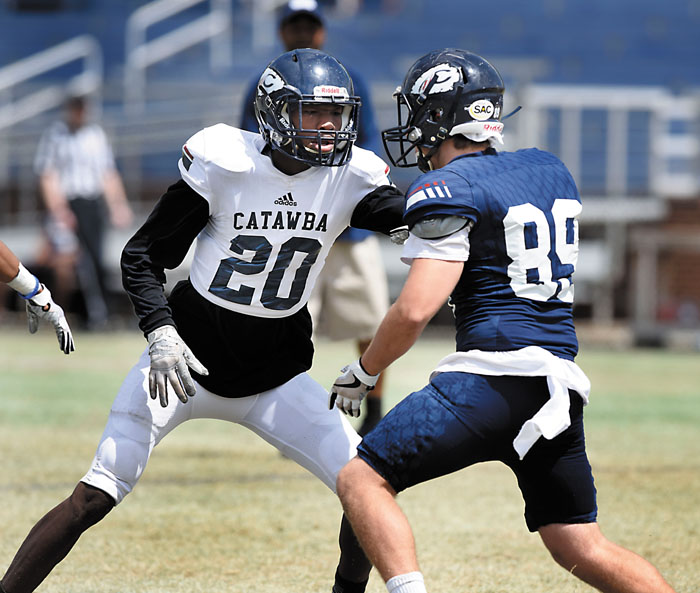 Brenden Westbrook (20) and Cam Hardie (89) during a Catawba spring football game on April 14. photo by Wayne Hinshaw, for the Salisbury Post

Westbrook turns 20 today and patience doesn’t come easily at 20, but Westbrook is trying.

In his days at Carson High, the wiry Westbrook (6-foot-4, 170 pounds)  was one of the top all-round athletes in Rowan County.

He scored more than 700 points in basketball and could’ve won dunk contests.

In football, he was an all-county cornerback and was conference special teams player of the year for his game-breaking return skills.

In the spring of 2017, he was the Post’s Track and Field Athlete of the Year. He was a guy who could dominate a meet by excelling in four events. He was county champion in the long and triple jumps. He finished as 3A state runner-up in the high jump one year. He finished fourth in the county at 200 meters, pushing three accomplished — and smaller — sprinters across the finish line.

There was a football Friday on which Westbrook became a legend. He beat a pretty good Central Cabarrus team virtually by himself, turning things upside down by returning the second-half kickoff for a touchdown, and then hauling a pick-six to the house. He galloped 146 long-striding yards on those two plays and scored 12 points in a minute.

Westbrook absolutely wowed Catawba coaches with his athleticism at a January workout. They put him near the top of their recruiting list.

It was assumed when Westbrook signed with Catawba in February 2017, that he’d be one of the key players in his recruiting class and might even be competing for a position as a true freshman.

Head coach Curtis Walker, who personally offered Westbrook, gushed about Westbrook when he signed, said he had a chance to develop into an All-American, but that development is still in the early stages.

“Last year, the decision was made for me to move from cornerback to safety not long before the start of the season,” Westbrook said. “So the best route was to take a redshirt year.”

If you’re thinking that making a transition from cornerback to safety is no big deal, well, that’s not true. While both positions fall under the general heading of “DB,” responsibilities are different.

Walker will tell you that. So will Westbrook.

“As a cornerback, you’re usually being asked to focus on and lock down one receiver or maybe defend a third of the field,” Walker said. “As a safety, you’re being asked to survey the whole field and react quickly to what you see.”

Westbrook loved being that cornerback alone on an island, enjoyed the challenge of taking a star receiver out of the game one-on-one, but Catawba is convinced that because of his extraordinary length (6-4 with long arms), Westbrook’s future is at safety in a 4-2-5 defense.

So far this season, even after the redshirt year, it’s still been a learning process for Westbrook. He’s moved up to second team free safety on the depth chart behind sophomore Mike Miller. He’s also involved on special teams, which is how many young players get their first on-field action for the Indians. He’s working every day in practice. He’s contributing. He’s taking steps.

“It was a difficult move to safety and I had a little trouble with it,” Westbrook said. “Safety is a very different position for me from what I did in high school, but I’m trying to adapt my eyes, learning to see everything. I want to be a factor.”

As a rule, safeties are more involved in dealing with running attacks than corners, and that’s a positive for Westbrook. One of the things he enjoys most about football is being physical. He’s long and lean, but he’ll hit people.

Walker said the Indians love Westbrook as a human being. He’s the kind of person they want representing the team in the community and in the classroom. They haven’t changed their opinion of him. Actually, they like him even more now than when they signed him.

“We haven’t changed our plans for Brenden at all,” Walker said. “Athletically, he’s exceptional and with his height and length he has a different skill set than most defensive backs. He’s showing growth every week and our expectations for his career are high. We believe he’ll do great things here because of the way he handles himself. He goes about everything the right way. This is a young man who really wants to be good.”

Westbrook has always looked at football as a character-builder. This past year has tested him in ways he didn’t expect, but he knows it’s going to make him a stronger player in the long run.

It was all moving too quickly when he first moved to safety, but it’s starting to slow down the more reps he gets.

Westbrook hasn’t declared a major yet, but he has a wide range of interests — environmental science, administration of justice, business.

As far as football, the key to Westbrook becoming a force for the Indians is seeing the field and playing instinctively. Playing free safety is a lot like center field. You have to get a good jump in order to be in position to make a play.

You can’t over-think. You just have to have fun and fly around.

“Most of the battles in football are those mental battles,” Walker said. “Brenden is getting there. He’s going to be really good.”