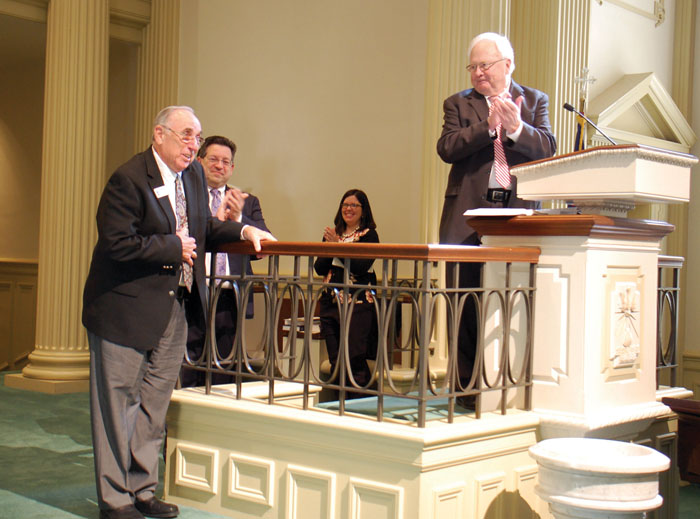 Mark Wineka/Salisbury Post Karl Hales, left, reacts with surprise as he learns Sunday he would be presented and received into the Order of the Long Leaf Pine, among the most prestigiou civilian awards presented by the governor of North Carolina. On hand to make the presentation at First Presbyterian Church were Phil Kirk, above right, and Brien Lewis middle back.

SALISBURY — Dr. Karl Hales has never been at a loss for words. He couldn’t afford to be.

He founded Catawba College’s communications arts department, and “communicating” became a 39-year career at the college.

Hales has been the public address announcer at Catawba football games for 38 years.

Over almost 40 years, Hales — a master storyteller — has visited as many as 19 Rowan County elementary schools to present Christmas stories in a rich, eloquent, distinctive voice that many Salisburians recognize within his first few words or sentences.

It’s that same voice that has made Hales a public and private school “Spelling Bee Pronouncer” for more than 30 years.

So it wasn’t easy to leave Hales speechless Sunday morning, but he was definitely caught off guard when he learned he was receiving the Order of the Long Leaf Pine, one of the most prestigious awards presented by N.C. governors.

The formal presentation came just minutes before the 11 a.m. service at First Presbyterian Church. It was a complete surprise to Hales, whose wife, Lynn, arranged all the details.

At first Hales couldn’t figure out why he was seeing so many family members and old friends when he walked into the sanctuary Sunday.

“I didn’t realize what was happening,” he said.

Within a few moments, Hales was being called up to the altar, where presenter Phil Kirk told him not to worry, it wasn’t his funeral.

Soon, Hales was overtaken by emotion as the mystery was explained and the First Presbyterian congregation gave him a standing ovation for, as the award describes, his contributions to the community, the extra efforts in his career and his many years of service to various organizations.

Kirk, a Catawba College graduate, former trustee and chairman emeritus of the N.C. State Board of Education, read the proclamation from Gov. Roy Cooper.

A former Republican legislator and onetime chief of staff for Republican governors, Kirk said his delivering the Order of the Long Leaf Pine on Democrat Cooper’s behalf reflects the ultimate spirit of bipartisanship.

Also playing a role in the presentation was Catawba College President Brien Lewis, who was among the many people who wrote recommendations for Hales to receive the award.

Lewis read excerpts from other letters that described Hales as having a big heart and great love for his community and how he has viewed his many roles through the years as a calling, not a job.

The letters spoke of Hales’ voice, high character and strong personality. They noted he hardly ever charges for his services, which usually involve an emcee or narrating role. “He does, however, accept and enjoy meals,” one person said.

While listening to Hales tell a story, such as the tales he offers at his annual “Christmas Traditions” program with friends, “your emotions come out,” another person wrote.

Lewis said in scanning through all the words of support for Hales, he was struck by something else.

A reception for Hales was held in First Presbyterian’s Lewis Hall after the church service.

He earned his master’s in speech and dramatic arts from the University of Arkansas in 1966 and a Ph.D. from Florida State University in rhetoric and public address, with a minor in theater, in 1975.

Since then, he has studied para-professional psychology and counseling at Catawba and Livingstone colleges and pursued postdoctoral studies in continuing education and management from Harvard University.

The list of Hales’ career accomplishments and community activities are lengthy, filling several typewritten pages. They touch many fields such as the arts, sports, elections, academics, church, civic clubs and nonprofit organizations.

In the arts alone, Hales has been an actor in 19 Piedmont Players productions and has directed three shows. In Lexington, he directed five theater productions and was director-lead actor in a 1991 performance of “Fiddler on the Roof.”

On the academic side through the years, Hales has been an interview trainer for high school seniors applying for military academies and prestigious college and university scholarships.

Hales once served on the Morehead Scholarship Foundation selection committee.

He is a longtime Optimist Club member, was a committee chairman for the March of Dimes for 34 years and served with United Way for five years.

In her own personal note to Gov. Cooper, wife Lynn Hales said, “I was really shocked about the number of things he has done, as well as the number of long years he has dedicated to each area, at Catawba, in the church and throughout the community.”

At Catawba College, from which he retired in 2005, Hales received the Swink Award for Outstanding Classroom Teaching and the Paul Fisher Service Award and was inducted into the Blue Masque Hall of Fame.

Hales still teaches an adult Sunday school class at First Presbyterian, something he has been doing for 29 years.

Kirk, in reading the formal words telling how the Order honors those who have given extraordinary service to their communities and state, said it really can be said another way.

Hales and others before him have given service beyond their job description and above what they have been paid for it.

And in Hales’ case, he’s done it a long time.