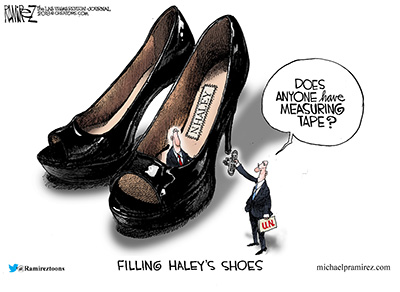 Halley’s Comet is one of the few comets that can be regularly seen on Earth with the human eye. It is considered a short-period comet for it can usually be seen twice over the human lifespan. Thought to be associated with extraordinary events by many, its presence with calamities can also be traced in history.

On the political playing field of Republican politics, two women stand out for their leadership and compassion in the international arena. Both of these women are of color: former Secretary of State Condoleezza Rice and United Nations Ambassador Nikki Haley. Their presence belies the mislabeling of the Republican Party as racist and anti-female. We have shouldered the banner for equality when others didn’t.

Nikki Haley’s resignation from her role as U.N. Ambassador flabbergasted many, for she was found fair and balanced in her approach by the establishment Republicans and Democrats as well as those on the international front. She is one of the most effective messengers for what the Trump Administration is trying to accomplish relative to foreign policy. Haley ascended from her home state of South Carolina fully embracing who she is as a Southerner and a Methodist who still engages her Sikh religion and doesn’t shy away from her roots in India.

Haley helped bring the message to North Korean that they are expected to come into the fold to seek peace or remain isolated from the industrialized world. Her stand with President Trump in support of recognizing Jerusalem as the site of our Israeli Embassy as well as capital for that nation will long be remembered. She has served this nation well and with distinction.

A former member of the S.C. House of Representatives, Haley was the first female governor of South Carolina, and the second Indian-American to serve as a governor in the United States. She fought for smaller government, lower taxes and increased economic development through the expansion of businesses that enhanced that state’s employment options. But what caught the eyes and hearts of many was her stand in a moment of crisis after the massacre of Charleston black church members by a racial terrorist. She called for the removal of the Confederate flag from that state’s capitol and grounds. She moved the flag without destroying a vital part of Southern history which demands to be remembered if we are to prevent a recurrence.

Watching Michael Haley, her husband, return as a captain in the U.S. Army National Guard, where he served an overseas tour, the strain of separation while operating in the international theater was written all over her face. Unlike most men with government roles, the responsibility of being the primary care giver and in this case financial provider isn’t all that easy. The banter of sexual assaults and the #metoo discourse was not far from her personal space for as an attractive woman she found herself too often the victim of unproven gossip which periodically resurfaces. Her first gentleman has stood faithfully by her side.

Did Haley step down to prepare for a presidential run, to restore her personal treasury or inject some sanity in her life? Her speeches reveal a depth of understanding of human conditions; her leadership has been outstanding, most often producing consensus. Participating in town halls, she is upright and forthright about the possibility for government to do good as well as getting citizens to also appreciate its limitations.

If Nikki Haley wants to run for president or get involved with citizens in a larger forum, she has my vote. She would one day be a wonderful choice as president of the U.S.A. as well as our first woman in that role.