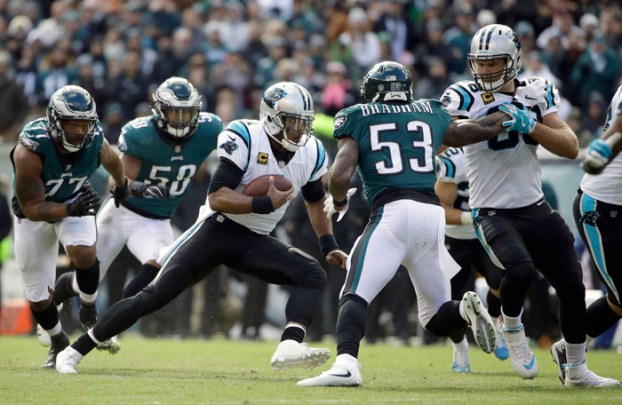 PHILADELPHIA (AP) — Cam Newton and the Carolina Panthers ruined the Philadelphia Eagles’ dance party.
Newton tossed a 1-yard touchdown pass to Greg Olsen with 1:22 left and the Panthers overcame a 17-point deficit in the fourth quarter to beat the Eagles 21-17 on Sunday.
Julius Peppers sacked Carson Wentz, forcing a fumble on fourth down from the Panthers 14 to seal the victory.
The Panthers improved to 4-2 with the biggest comeback in franchise history. The defending Super Bowl champion Eagles fell to 3-4.
“This place was as advertised, playing in a hostile environment but we overcame that and kept pushing through,” Newton said. “Good teams have to win on the road and win close games and we did that.”
After Carolina took the lead, the Eagles started at their 30. A 48-yard pass interference penalty on James Bradberry against Alshon Jeffery put the ball at the Carolina 22. Eric Reid appeared to intercept Wentz’s overthrown pass but the play was overturned on a video review. Wentz threw incomplete to Jeffery in the end zone on third-and-2 and was stripped on the next play.
“Pressure is off,” Eagles coach Doug Pederson said. “Nobody thinks we can do anything. A lot of football left.”
Down 17-0, the Panthers watched a couple of members of Philadelphia’s kickoff team do a choreographed dance while others celebrated as if the game was over during an extended break before the ball was placed on the field.
Then the Panthers started their rally when Curtis Samuel ran in from the 14 on a reverse but Graham Gano missed the extra point.
“We collectively got together and knew that we had to up the tempo and have a sense of urgency,” said Christian McCaffrey, who had 80 yards from scrimmage.
Newton then quickly drove the Panthers 87 yards, tossing an 18-yard pass to Devin Funchess. He connected with Jarius Wright on the 2-point conversion to get Carolina within a field goal with 4:08 left.
The Panthers forced a three-and-out and got the ball at their 31 with 2:17 remaining.
Newton threw three straight incomplete passes, but took a hit on fourth down and still completed a 35-yard catch-and-run pass to Torrey Smith to reach the Philadelphia 34. A 22-yard pass to McCaffrey gave Carolina first down at the 4. Newton ran it to the 1, setting up third down. He threw it to Olsen wide open in the back of the end zone.
Newton finished 25 of 39 for 269 yards and ran for 49 yards.
“I took that one extremely personal,” Newton said of a 23-17 loss at Washington last week. “I told myself if we get in that position I have to hold up my end. I didn’t want to let anybody down.”
Wentz’s 11-yard TD pass to Jeffery gave Philadelphia a 7-0 lead in the second quarter. Ertz had catches of 15 and 22 yards on the drive and Jeffery hauled in a 20-yard pass before the score.
Jeffery and his teammates had a unique celebration. He placed the ball on the ground and pretended to do a free kick.
Wentz tossed a 1-yard TD to Dallas Goedert to make it 17-0 in the third quarter, finishing off a 17-play, 94-yard drive that chewed up 9:22 on the clock.

DO OVERS
Gano made a 39-yard field goal that was nullified by a false start. He missed from 44 yards, but another false start allowed the Panthers to try again and they punted.

NOT GETTING ALONG
Reid and Eagles safety Malcolm Jenkins exchanged words and were separated before the coin toss. The two men have history going back to last year when Reid left The Players Coalition, which was co-founded by Jenkins. Reid and Jenkins are both fighting for the same cause — social and racial injustice — but have disagreed over how to do it. Reid recently called the coalition “an NFL funded subversion group” and he strongly supports his friend, Colin Kaepernick.
Reid also got into it with Ertz after tackling Wentz following a handoff in the first quarter. Both guys received personal foul penalties.

REID KNEELS
Reid again took a knee during the national anthem. He’s been doing it since Kaepernick, his former teammate on the 49ers, began taking a stance in 2016.

INJURIES
Panthers: DE Mario Addison twice left the game with a back injury and didn’t return after going out in the fourth quarter.
Eagles: RB Darren Sproles (hamstring), CB Sidney Jones (hamstring), DT Haloti Ngata (calf) and S Corey Graham (hamstring) were among the key players out of the lineup.

UP NEXT
Panthers: Host the Baltimore Ravens on Sunday.
Eagles: Play the Jacksonville Jaguars in London on Sunday.