Vegetable growers impacted by massive amounts of rain this season 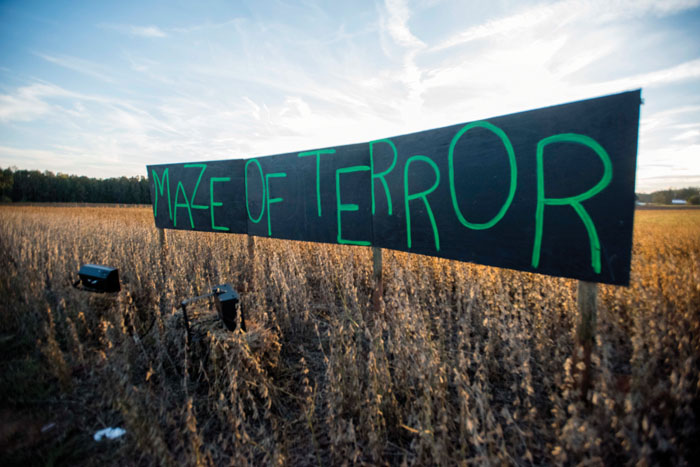 JON C. LAKEY / SALISBURY POST Mike Miller had to delay the opening of one of his more succesful agribusiness ventures on his farm southwestern Rowan County because the rains that came from the recent storms. The highly successful Maze of Terror that combines a twisting turns and paths of a corn maze and the added entertainment of Halloween jump scares. The rains let up long enough for the fields to dry up and make the maze usable for customers. . China Grove, North Carolina. 10/19/18

SALISBURY — As Rowan County recovers from two hurricanes, the effect on farmers remains.

For tomato growers, Hurricane Florence and Hurricane Michael hit during harvesting. David Correll of Correll Farms, said 50 percent of the fruit harvested this past week was unsellable.

“Planting and harvest windows are very specific, and any major disruption in their scheduling effect the outcome of their crops,” Fine said.  “Late season tomatoes took a hit with an increase in fungal and bacterial disease pressure as well splits occurring on ripening fruit. Many fruits were nearing the harvest stage of production, a 72-day growth cycle, only to split in the final stages of ripening.”

Correll said they would have continued to sell at the farmers market for another two weeks, but couldn’t.

Mike Miller of Miller Farm said the quality of his fruit and vegetables wasn’t good because of the large amount of rain. He said losing a couple weeks of sales is better than selling low quality food.

“One bad item can ruin your reputation and could lose business for the next year,” Miller said.

For his tomato crop, 60 percent was unsellable after the hurricanes.

Fine said statewide farmers agree that this season had too much rain.

“Vegetable growers across the state all had similar sentiments regarding the overall growing conditions this season: too much rain,” Fine said. “To harvest quality fruits and vegetables, growers strive to perfect the art of water management.”

“For commercial farmers, drought is better than too much rain,” he said.

He added the eight inches of rain in early August caused a significant amount of his crop to be unsellable. Correll said some of the isolated storms can cause more damage, recalling a hail storm that shredded his crops.

All and all, Correll said they are fortunate the hurricanes didn’t impact them as greatly as eastern North Carolina and Florida.

“Our livelihood will continue,” he said. “Our thoughts and prayers are with those guys. It’s going to be a a long road.”

Fine said farmers are used to the ups and downs, but this year the vegetable farmers were hit especially hard.

“Seasoned vegetable farmers are used to seasonal volatility of products, but this year in particular will stand out as a tough one for the books,” he said.

Demolition of Buck Steam Station is the end of…