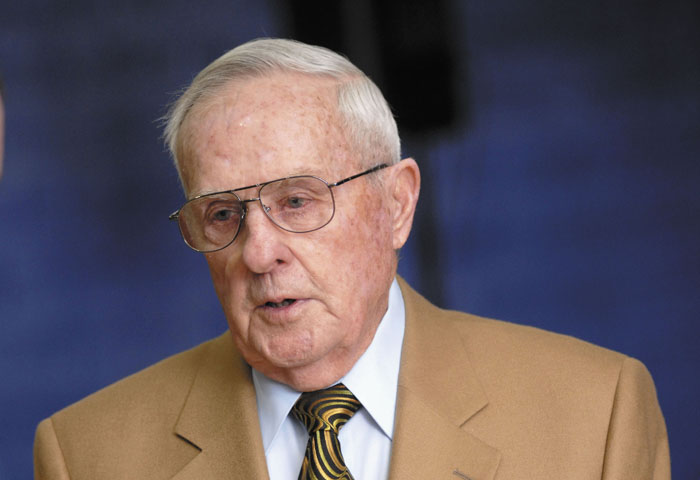 SALISBURY — The funeral service for legendary Catawba College basketball coach Sam Moir will be held on Saturday at 3 p.m., at Omwake-Dearborn Chapel, on the college’s campus.

Moir, a member of eight halls of fame, died Saturday night at VA Medical Center at the age of 94. According to sources close to the family, Moir had been in declining health since under going hip surgery in September.

During the first 10 years of his Catawba career, Moir’s Indians had only a practice gym on campus, playing their games at Salisbury and North Rowan high schools. Moir was part of a committee that then saw the construction of Goodman Gym, one of the finer small college facilities anywhere. The new gym opened in 1970 and was renovated just recently. Moir also led his program through the transition from the Carolinas Conference to the South Atlantic in 1989.

The Sam Moir Christmas Classic, a high school holiday tournament for Rowan and Davie counties’ boys and girls teams, has been held every December at Catawba’s Goodman Gym and has become an annual staple of the community. The three-day event always features big crowds for the games.

Moir began the high school tournament in 1971 to assist with expenses of his college team during Christmas break. It grew larger in popularity than he ever imagined and the event was re-named in his honor in 1996.

Along with assistant coaches Tom Bonebrake, Bill Haggerty and Jim Baker, Moir established summer basketball camps that were enjoyed by thousands of area youth for over 30 years.

Baker, who played for Moir at Catawba, was assistant coach for one season before taking over the program when Moir retired in 1994. Baker coached 20 seasons, going through the 2014 season. Rob Perron is the current Catawba men’s coach, following Baker four years ago.

“Catawba College, his former players, as well as all of those he worked with, meant a great deal to him,” Ron Moir said of his father on Sunday. “I will greatly miss him, and I know there are many others who will as well.”

Sam Moir once said that he was most proud of the fact that his former players went on to successful lives and careers in many different professions.

Haggerty, Moir’s assistant from 1987 until his retirement, said that three key words come to mind when he thinks of the coach.

“He was dedicated to the program and very competitive,” Haggerty said, of Moir. “He didn’t want to lose at anything, checkers, marbles or whatever — but especially basketball. But he was always most concerned about his former players and had they were doing, in their lives, after college and basketball. So, those three words — dedication, competitiveness and concern — really defined, in my mind, Coach Moir.”

Tom Childress, retired vice president at Catawba, following a long career in athletics at Pfeiffer and Catawba, knew Moir for 60 years. Childress was coached by Moir in high school basketball in Mt. Airy and then at Catawba in the early 1960s.

“The greatest compliment for a coach is that when they retire, players still want to come back and sit down and talk with ‘Coach,'” said Childress, himself a former basketball coach at Pfeiffer. “That’s a great compliment. We would get together in Mt. Airy, every August, about 25 guys who played for him in high school — basketball and baseball — and just had a great time.

“His record speaks for itself,” continued Childress. “Coaching at a place for 34 years, that’s unheard of now. That says an awful lot about his relationship with the school.”

Haggerty added that Moir was pretty much known for an innovative, offensive basketball mind. To Moir, the game was all about getting the ball in the basket and he recruited and coached some prolific scorers. Moir is definitely remembered for bringing Dwight Durante to Catawba in the 1960s, when bigger schools in the state were not recruiting African Americans. Durante, a 5-9 guard, scored over 2,900 points for Catawba in just three-and-a-half years — and that was before the 3-point basket was instituted.

“Yes, he didn’t like to think about defense or even practice defense,” said Haggerty. “He just wanted to outscore the other team. I remember riding back from a game where we won, 102-101, and he was completely happy with it. He wasn’t worried about giving up 101 points, as long as we had more.”

Childress remembers being a young coach, fresh out of graduate school at Appalachian State, competing with his mentor on the basketball court.

“Against Coach Moir, it was uncomfortable at first,” said Childress. “When I first started at Pfeiffer, Catawba had some eventual Hall of Fame players and we were just trying to get re-loaded. So that was a little intimidating, those first couple of years. I eventually got over that and at one time, Catawba vs. Pfeiffer was a pretty good rivalry game. Of course, there were other rivals in that league because the conference was extremely strong at that time.”

Those memories are strong for Childress as he remembers Moir with obvious, great admiration. He and Haggerty, among others, spent a lot of time with Moir during his last years.

“I never called him Sam … he was ‘Coach’ to me until the very end, and that’s out of respect,” continued Childress. “And you know, I guess in these last few years, I’ve learned a whole lot more about the man. You can look at all of his accolades, but you don’t know all of the behind-the-scenes things that went into his life’s journey.”

The basketball court at Goodman Gym was named in Moir’s honor after his retirement, as well as the Catawba men’s basketball most valuable player award, given annually to the current team’s top player. The MVP was sponsored by the Salisbury Civitan Club, which Moir was a long-time member of, in 1994.

Moir is a member of the North Carolina Sports Hall of Fame, as well as the halls of fame for the NAIA, Catawba College, South Atlantic Conference  and Salisbury-Rowan County, Oak Ridge Academy, Mt. Airy and Surry County. He has received Appalachian State’s Distinguished Service Award.

Born Sept. 13, 1924, in Francisco, a small town near Mt. Airy, N.C., Moir played basketball and baseball at Appalachian State University before graduating in 1950. Like many men during that era, Moir’s collegiate career was interrupted by military service during World War II. He was also playing professional baseball, before being drafted for military service. During the war, Moir was awarded a Purple Heart medal.

“He was an example of the ‘greatest generation,'” said Childress. “He was only 19 when he was drafted into World War II. He was playing minor league baseball and life was good and then the war comes and there he is, right after his first year in college, he’s a tail gunner on a B-24, a plane they called the ‘flying coffin.’ Half of those planes never made it back.”

Moir did make it back from the war and returned home for a successful coaching career at Mt. Airy High School, prior to coming to Catawba in 1960. Moir coached Mount Airy’s Granite Bears from 1950-60. His prep basketball coaching record was 179-74, including a state championship and a perfect 25-0 record in 1960. Then it was on to Salisbury and Catawba for the next 34 seasons.

Another son, Mike Moir, resides in China Grove. Sam Moir was predeceased by his wife, Betty, who died in 2001. Moir’s brother, Charles, now 88, coached men’s basketball at Virginia Tech for many years.