In battle of unbeatens, No. 3 Clemson trounces Wolfpack 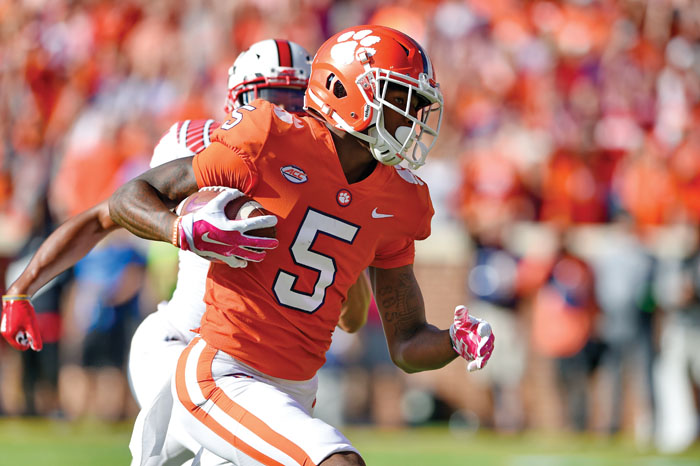 Clemson's Tee Higgins runs in for a touchdown after catching a pass during the first half of an NCAA college football game against North Carolina State, Saturday, Oct. 20, 2018, in Clemson, S.C. (AP Photo/Richard Shiro)

CLEMSON, S.C. (AP) — Trevor Lawrence came in wanting to leave little doubt about No. 3 Clemson’s championship goals this season and about his ability to take the Tigers there.

He accomplished both Saturday in a 41-7 rout of No. 16 North Carolina State, helping Clemson dominate the showdown between the Atlantic Coast Conference’s last remaining undefeated teams.

“We just didn’t want to leave any doubt that the game should’ve went a certain way,” Lawrence said. “It was clear how we won the game by a good bit.”

And it was clear Lawrence, the strong-armed, long-haired freshman, has the goods to keep the Tigers out front.

He passed for a career best 308 yards including a 46-yard TD throw to Tee Higgins in his third college start. He directed three first-half drives of 50-plus yards as the Tigers took quick control of an expected tight contest.

Travis Etienne ran for three touchdowns, increasing his ACC-leading total to 14 on the ground this season.

Etienne said Clemson has adjusted well to Lawrence’s leadership since he took over as starting quarterback. “Trevor is out there doing what he does,” Etienne said. “We know what he can do and we’re excited about it.”

The Tigers (7-0, 4-0) opened with seven straight wins for the third time in four seasons in topping the Wolfpack (5-1, 2-1) for the seventh consecutive season.

It was the ACC’s first matchup of undefeated teams this deep in a season since 2013, a game that also took place in Death Valley. But unlike five years ago when the 6-0 Tigers were pummeled by eventual national champ Florida State 51-14, it was Clemson who took control early and never gave the Wolfpack a chance to ra

North Carolina State quarterback Ryan Finley came in leading the ACC at more than 324 yards passing a game. He managed just 156 yards passing with two interceptions and a fumble.

“We just never really got into a rhythm,” Finley said. “That hurt because we’re a rhythm offense. We going to get right and we’re going to bounce back. I’m confident in our guys.”

The Wolfpack avoided their first shutout in four years on Reggie Gallaspy’s 9-yard TD run to start the fourth quarter. Still, it was their fewest points scored since that 41-0 loss to the Tigers in 2014.

Clemson quickly took the steam out of this showdown with touchdowns on two of its first three possessions. Etienne had a 3-yard TD run to close the first one while Lawrence threw a 46-yard scoring pass to Tee Higgins to lead 14-0.

The Wolfpack seemed to stabilize themselves and drove into Clemson territory looking for points when Ryan Finley bobbled a shotgun snap and defensive tackle Dexter Lawrence pounced on it. Etienne closed that series, too, with a 2-yard touchdown run.

Clemson piled on right before the half ended when on safety K’Von Wallace’s interception and 46-yard return to the Wolfpack 4 and led to Greg Huegel’s 28-yard field goal for a 24-0 lead at the half.

Lawrence, whose rise led last year’s starter Kelly Bryant to transfer, looked smooth and polished in his third career start. He completed 26 of 39 passes and his long TD throw.

“I felt really good out there,” he said. “This was good for me.”

The Wolfpack came in averaging 480 yards of offense a game, but were held to 297.

North Carolina State: The Wolfpack kept the last two games with Clemson within a touchdown because of the talent they sent to the NFL last year, particularly defensive end Bradley Chubb. This group is not yet ready to match Clemson’s firepower.

Clemson: The Tigers’ road to a fourth straight ACC title game as leaders of the Atlantic Division seems well paved and smooth with few speed bumps to negotiate. The trickiest game might be at Boston College on Nov. 10.

North Carolina State came in leading the country in third-down conversions. The Wolfpack were just 2 of 12 in that category against Clemson. “It’s been a strength and it wasn’t today,” Doeren said. “For us, rhythm’s important and we didn’t have it.”

Last year, North Carolina State coach Dave Doeren asked the ACC to investigate a laptop on Clemson’s sideline that turned out belonged to the program’s social media and communications group and was not used for football purposes. That did not stop from Clemson from having a picture of a laptop on one of its oversized play cards in the fourth quarter against North Carolina State.

“The ultimate troll move,” Swinney joked. “Isn’t that what you call it?”