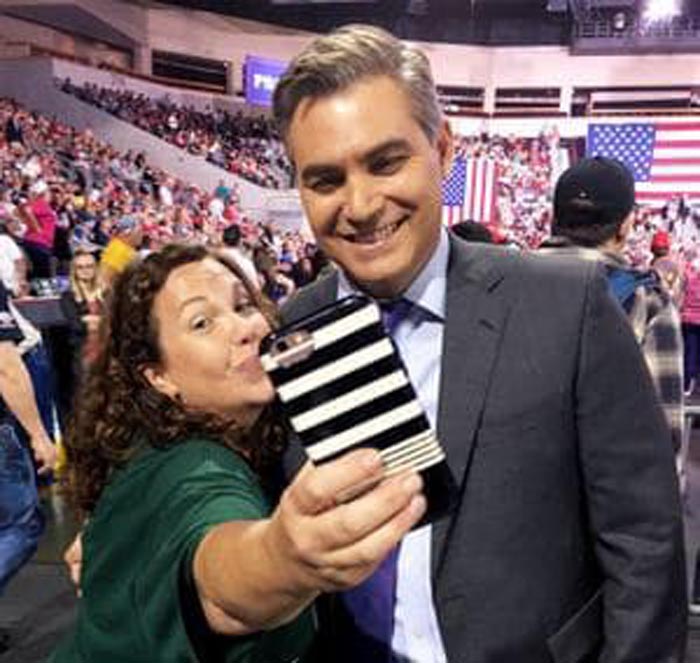 In Erie, Pa., CNN reporter Jim Acosta takes a selfie with Stephanie Boyd, before the start of a Trump rally. Paul Farhi/Washington Post

“Jim!” shouts Stephanie Boyd, who is standing just beyond the barricades that pen in dozens of reporters. “Jiiiiiiiim!”

Acosta looks in Boyd’s direction. He isn’t sure whether she wants a selfie or wants to dress him down. Sometimes, it’s both.

CNN’s chief White House correspondent saunters over to Boyd. He smiles, and so does she.

“Can I take a picture with you?” she asks, dispelling his wariness.

The encounter is one of dozens Acosta will have with President Donald Trump’s supporters, who have gathered by the thousands in the Erie Insurance Arena for one of his campaign rallies.

Acosta has come to town on this Wednesday night to cover the president. Ever since he started covering Trump, Acosta has known that such events can be fraught.

Acosta is both a recognizable face and a walking incitement to members of Trump Nation. He’s something like the opposing team at a home game — a villain, a target.

Shortly before Acosta meets Boyd, Danny Wheeler sidles up to him at the barricade. “Tell the truth, man!” Wheeler, from nearby Fairview, Pennsylvania, lectures him. “Just tell the truth.”

“We do, sir,” Acosta replies, his voice level, his demeanor pleasant.

It goes like this for hours in Erie, interrupted only by the main event, Trump’s speech. Throughout the evening, between on-airs “hits,” Acosta politely accommodates perhaps two dozen selfie-seekers and innumerable others who are out to harangue him.

Dozens of other journalists go about their business unrecognized and unmolested. Not Acosta.

To each of his critics, Acosta responds with variations of the same answer: I’m just doing my job. I’m reporting the facts. I’m holding the president accountable. Sometimes he asks them, “Isn’t that what a good reporter is supposed to do?”

In the hopped-up atmosphere of a Trump rally, they don’t seem to think so. Spotting Acosta idling in the press pen, John DeAngelo stops a few feet away, points and then goes into a kind of crude Marcel Marceau routine. He raises one middle finger toward the reporter, then the other, and then begins pumping both up and down in rapid succession. Then he points again at Acosta and puts an index finger to his mouth and makes gagging noises.

“He’s horrible,” DeAngelo, a carpenter from western New York, says a minute or so later. “CNN’s horrible. CNN’s not news. It’s more like a tabloid than a news network. It’s so one-sided.”

DeAngelo doesn’t cite anything specific about Acosta’s reporting, as is typical. Among the Trump faithful, Acosta-hate seems to be more of a feeling than a particular set of facts. It’s not something he’s reported; it’s just … him.

“I’m a master carpenter with a ninth-grade education, and I know” the difference between good and bad reporting, says DeAngelo, who is wearing a button depicting Hillary Clinton in prison stripes. “I listen to all the news stations and I make up my mind. The most reliable news is Fox. Tucker, Hannity, and — what’s that woman’s name? — Laura (Ingraham), they’re great. I know that’s opinion, not news reporting, but I can tell the difference. You can tell when (Acosta) is asking a question that he’s doing it for the drama, not for the facts. I watch CNN for three or four minutes and I want to poke myself in the eyeball.”

By Trump-rally standards, this is relatively tame. In late July, Acosta faced a more obstreperous reception, one that he says left him “shocked and saddened.” During one of his periodic TV spots, the crowd turned toward his camera position and began chanting, “CNN sucks!”

Bad enough, but what CNN’s viewers didn’t see at that rally was the scene at the end. A large and surly group of rallygoers gathered around the press pen to hurl more verbal abuse at Acosta. “Stop lying!” one man yells. A rallygoer proudly shows off a T-shirt reading, “(Expletive) the media.”

Acosta tweeted a video clip of the episode with a comment reading, “Just a sample of the sad scene we faced at the Trump rally in Tampa. I’m very worried that the hostility whipped up by Trump and some in conservative media will result in somebody getting hurt. We should not treat our fellow Americans this way. The press is not the enemy.”

Afterward, he and his crew decided not to tempt fate. They raced back to their cars and got out of Tampa as quickly as they could, he said.

Acosta says Tampa was a more “intense” version of what he’s periodically faced since he started on the Trump beat.

Actually, Acosta gets a gentler reception when he covers Trump abroad, says Allie Malloy, who produced his reporting from Erie. She notes that the crowds at international events are much more polite toward the press than those in the United States.

Trump has certainly done his part to agitate against the news media in general and Acosta in particular. On several occasions, he’s refused to take questions from Acosta, all the while calling him and his network “fake news.”

The criticism is rich with irony. Some have suggested that CNN was instrumental in fostering Trump’s rise and ensuring his election by airing extensive coverage of his campaign rallies in 2015 and 2016. It also employed his former campaign manager as an analyst, who promoted him relentlessly.

In any case, Acosta says Trump isn’t the primary source of the heat now.

“A lot of people view this through the prism of conservative media,” he said. “If you stay on Fox, Infowars, Breitbart or Daily Caller, you’ll see something (inflammatory) about us. That’s what supercharges everyone.”

He cites a segment on Sean Hannity’s Fox News program last year in which Hannity singled him out. Under a banner reading “Jim Acosta Unhinged,” Hannity opined, “Instead of looking for answers, Acosta, he’s looking for ways to damage the president, (and to) prop himself up.”

Acosta naturally disputes the characterization and says he looks on the rallies as a way to engage people directly.

“I don’t get tired of what happens at the rallies,” he said. “I enjoy talking” to Trump’s supporters. “It gives them a chance to get things off their chests. But I also get an opportunity to let them hear directly from me.”

He adds, “I don’t have any hard evidence that I’ve changed any minds. But I do, from time to time, hear from supporters who tell me they don’t think we’re the enemy of the people. … My parents were blue-collar. So I can relate to a lot of these folks.”

Acosta, 47, grew up in Annandale, Virginia, and attended James Madison University. His father, A.J., an immigrant from Cuba, worked for 40 years as a clerk and cashier at Safeway stores in the Washington area; his mother, Barbara, has worked as a bartender and waitress.

Not that that matters especially to people like Amy Bujnicki, a social worker from Buffalo, who caught Acosta’s attention in Erie by flinging a double flip-off in his direction as the rally wound down.

“That’s not very nice,” Acosta told her after bounding down from the elevated TV platform. “I wouldn’t go to your work and flip you off.”

“I don’t understand why you guys are so negative” toward Trump, Bujnicki responded.

A small knot of people began to gather to hear the exchange. One woman commented, “You’re wasting your time. He’s the worst!”

Acosta pressed on. “We’re not,” he said to Bujnicki. “How much airtime do we give to people who support him?”

Said Bujnicki: “I used to think that everything that came out of a news reporter’s mouth was a fact. And it’s not. On CNN, it’s not.”

Acosta: “I invite you to watch us. When (Trump) says things that are not true, we have to report that. We have to fact-check him.”

Acosta: “Google my name and ‘Barack Obama.’ There were many days I was tough on him. People have short-term memories. They think we’re only being tough on Trump. That’s just not true. I was covering the campaign in 2016 end to end. There are people who tell me, Republicans who tell me, they wish we hadn’t given as much coverage to Trump as the other Republicans.”

Bujnicki doesn’t seem convinced. Acosta, perhaps having learned his lesson in Tampa, tells her he has to get going.

As he turns to leave, a group of three young men in Make America Great Again hats is at his elbow. “Jim, would you mind?” one of the guys says, raising his smartphone for a selfie.

Acosta says sure. Then they all lean in and smile.