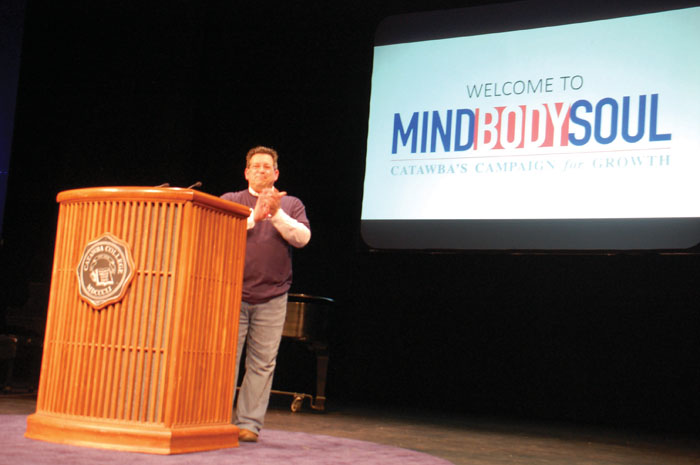 With many of the alumni still savoring that homecoming victory, the college went for the real score soon after the game, launching a three-year, $38.2 million campaign for growth titled “MindBodySoul.”

“How about those Indians?” Catawba President Brien Lewis told a crowd of college supporters in Hedrick Little Theatre, and it served as an introduction to a campaign, Lewis said, that aims not only in growing the institution and its enrollment, but fostering the personal growth of students.

Catawba College has to prepare students to reach their full potential, Lewis said, describing it as an “education of the whole person.”

With that noted, the “Mind” part of the campaign represents the most significant investment at $28 million, and it aims at enabling the college to thrive, recruit and retain  “exceptional students.”

In general, the “Mind” campaign segment intends to raise $8.9 million for environment and science, including renovation of the Shuford Science Building; $3.9 million for health science; $1 million for performing arts; $4.5 million for business; $2.3 million for “student success,” such as hiring success coaches and expanding tutoring; $2.8 million for internships, research, travel and service learning; and $1 million in scholarship support.

The “Body” refers mostly to athletics and represents $6.9 million of the total. It includes goals of a $3.5 million renovation of Newman Park; $1.3 million for the installation of artificial turf and a state-of-the-art video board for the football stadium; $1.1 million for new locker rooms and renovated coaches’ offices; $500,000 for Frock Athletic Complex’s concessions and restrooms; $221,000 for softball field lighting and $250,000 for an outdoor sand volleyball court.

The growth campaign sets a goal of $3.3 million for the “Soul” portion, which entails $300,000 for the organ’s renovation and enhancement at Omwake-Dearborn Chapel; $1 million for a chapel endowment; a $1 million endowment for “discovery programs”; and $1 million to support clergy alumni, churches and students preparing for the ministry.

In the spring, Catawba College brought to a close its previous long-term fund-raising campaign, which set a goal of $60 million and ended up at $73 million.

Lewis said experts would say launching a new campaign now is breaking all the rules, and Catawba should wait a few years. But the college needs to do this, Lewis said, because of “wonderful opportunities and significant challenges” ahead.

Honorary co-chairs of the campaign will be Fred Stanback and Junie Michaels.

The overall MindBodySoul co-chairs are Darlene Ball and Don Bross.

Heading the “Mind” committee will be Deborah Messinger and Greg Alcorn; the “Body,”  Randy Crumpler and Barbara Marshall; and the “Soul” committee; Richard Seiwell and Sara Cook.

Each facet of the campaign is broken down so that contributions can be earmarked to specific needs and projects.

Ball announced Saturday evening that the campaign has received a significant check and has 100 percent participation from the college board of trustees, putting the campaign at $21 million already.