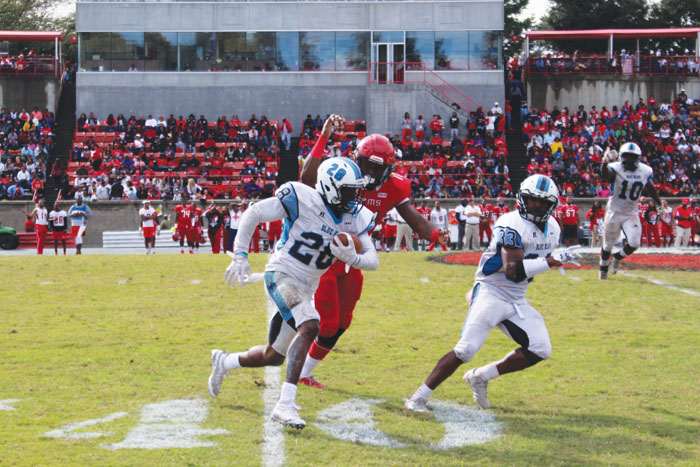 WINSTON-SALEM — Winston-Salem State running back Kerrion Moore broke free for two long touchdowns late in the first half here Saturday afternoon, sparking the Rams to a 34-19 win over Livingstone.

Moore, a 190-pound senior, flipped the game with four minutes left in the second quarter, as Livingstone protected a slim 7-6 lead. Moore busted through the right side of the line, untouched, for a 54-yard scoring dash.

Three minutes later, Moore scored again, this time from 52 yards out, and suddenly, the Rams led at halftime, 20-7.

The loss spoiled the first start at quarterback for Livingstone’s Alexis Archie, a former standout at North Rowan High School. He came off the bench last week against Shaw, after injures to starter Miles Hayes and backup Xavier Longerbeam.

Archie, who transferred into Livingstone last January from Feather River Community College, completed 20 of 47 passes for 291 yards and two TDs, yesterday against WSSU. However, Archie did throw three interceptions.

Archie had the Blue Bears on top, 7-6, after a five-play, 53-yard drive that concluded with a 26-yard touchdown pass to receiver Anthony Faraimo — with 10:46 left in the second quarter.

After the Blue Bears forced a punt on WSSU’s next possession, Livingstone had a chance to add to its lead.

But Livingstone’s nine-play march reached the Rams’ 19-yard line before an Archie pass was picked off in the end zone by WSSU’s Daryus Skinner.

Four plays later, Moore was in the end zone and WSSU had a lead it would never relinquish — the 16th straight win over Livingstone, dating back to 1998.

WSSU quarterback Dominique Graves scored on a 27-yard run in the third quarter and kicker Riley Robbins booted a 23-yard field as the Rams’ padded their advantage to 29-7.

Archie connected with receiver Deparis Carter on a 65-yard scoring pass in the first minute of the fourth period, pulling the Blue Bears to within 29-13. But on the extra point attempt, De’Andre Blevins picked up the blocked kick and returned it for two points, another back-breaker for Livingstone.

Robbins added another field goal (27 yards) a few minutes later and although Livingstone’s Andrew Faraimo had a 6-yard TD run at the 5:25-mark, WSSU coasted to its third straight win against CIAA Southern Division foes.

The Rams are now 4-3 overall and 3-1 in the conference while Livingstone falls to 2-5 and 0-4. The Blue Bears have lost four games in a row.

Carter had 108 yards receiving on five catches for Livingstone, including the one touchdown. Moore led all runners in the game with 154 yards on 21 carries, while Graves completed 7 of 19 passes for 108 yards.

NOTE: Livingstone travels to Fayetteville State for a 2 p.m. kickoff next Saturday. … WSSU also travels next week, going to Shaw for a 1 p.m. contest. … each of the Faraimo twins, Anthony and Andrew, scored TDs for Livingstone.