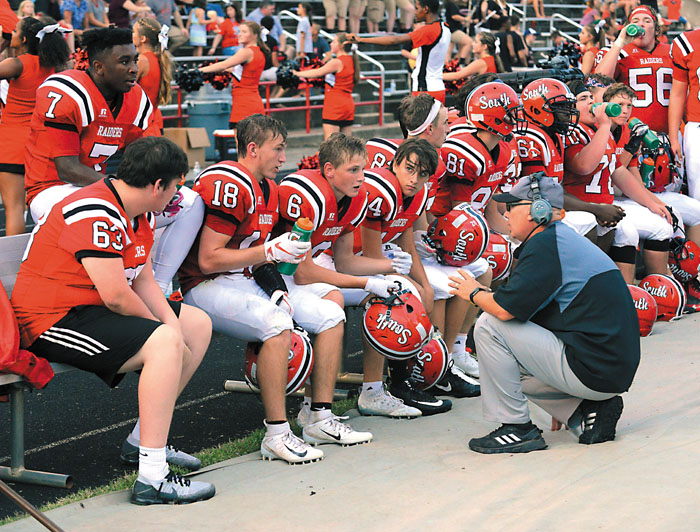 LANDIS — South Rowan isn’t counting the days until the end of the season. It’s making them count.

The Raiders continued their slide toward the Central Carolina Conference finish line Friday night, but were decidedly encouraged following a dizzying, 48-26 loss to visiting Lexington.

“Any time you can fight to the very end and know that you were in the game, it’s a little easier to swallow,” fourth-year coach Daniel Yow said, just moments after South (2-7, 2-5) was outscored for the fifth time in its last six outings. “We never like to lose a game, period. But we know we fought well and played them toe-to-toe. We just gave up too many big plays.”

South gave away substantial yards and scoring plays like they were pre-Halloween treats. Lexington (5-4, 4-3) amassed 595 total yards and won convincingly, despite committing 19 penalties worth more than 200 yards.

“I’ll make this easy for you,” winning coach Chuck Henderson crowed afterward. “We did a good job moving the ball, but we had way too many penalties.”

The Yellow Jackets were led by sophomore quarterback Tedric Jenkins, a southpaw who dissected South’s cut-and-past secondary with a jeweler’s precision. He completed 22-of-30 passes for 311 yards and two touchdowns — and just for good measure, bootlegged for two other scores.

“I’ve never seen a quarterback read the field as well as he did,” South outside linebacker Cameron Hurd said. “He could scramble and find open receivers. Or he could take off running like Cam Newton. We had our hands full.”

“Give credit to Lexington,” said South defensive end Remington Steele. “They had a good quarterback, good receivers and they made good reads. We had to adapt a little bit, had some players stepping in on defense and trying to do a good job.”

South was minus two defensive starters, but got solid games from replacements Hurd — normally a safety —  and DB Ward Bond, a sophomore who came off the bench after playing in a jayvee game Thursday night. Still, Lexington had too many weapons and too much firepower for the Raiders.

“I hope that’s what it was,” said Henderson.

South hung around in the opening quarter and tied the score, 13-13, when junior quarterback Drew Huffman darted 63 yards for a touchdown late in the period.

“I was supposed to read the defensive end,” he said after passing for 133 yards and rushing for 109. “He was shuffling with the slot. Most of the time when we ran sweeps to either side, the middle opened up. That was almost like a quarterback draw play.”

By the second quarter, the Raiders’ vessel was taking on water. Lexington scored three unanswered touchdowns — including a pick-six interception return by Abraham Vargas-Perez that made it 27-13 and deflated South’s hopes.

“We were running a swing-route there,” Yow reported. “The kid made a great play, was able to put his hand up and bat it out of the air. Nine times out of 10 that ball hits the ground. He made an athletic play and caught it and scored.”

The Jackets extended a 14-point halftime lead with two scored in the second half. First Jenkins capped an 11-play drive with a 2-yard touchdown run with 7:21 remaining in the third quarter. In the fourth, he rolled out to his left and threaded a 34-yard TD pass to Downs.

“It came down to big plays,” said Yow. “That was one of the things we preached. We needed to keep everything under control and play to the best of our ability.”

There were, of course, some bright spots for South. Bryson Bebber sparked the defense when he recovered a first-quarter fumble in the end zone. Two-way lineman Austin Barnes had two sacks. For the offense, Huffman spiraled a 34-yard TD pass to Andrew Jones late in the first half and Hurd made six receptions that netted 57 yards.

“This wasn’t one of our worst games,” Hurd insisted. “Last week, we had problems and kind of fell apart. This week, we made plays and improved a lot.”

And that counts for something.

NOTES: Huffman was intercepted twice, boosting his season total to 18. … Hurd had a 51-yard kick return to the Lexington 35-yard line in the first quarter, but the ensuing drive went nowhere. … It was Bond’s first varsity game. … Lexington finished with 387 yards passing and 208 on the ground. … The Raiders close their season with conference games at Central Davidson next week and at home against Salisbury on Nov. 2.