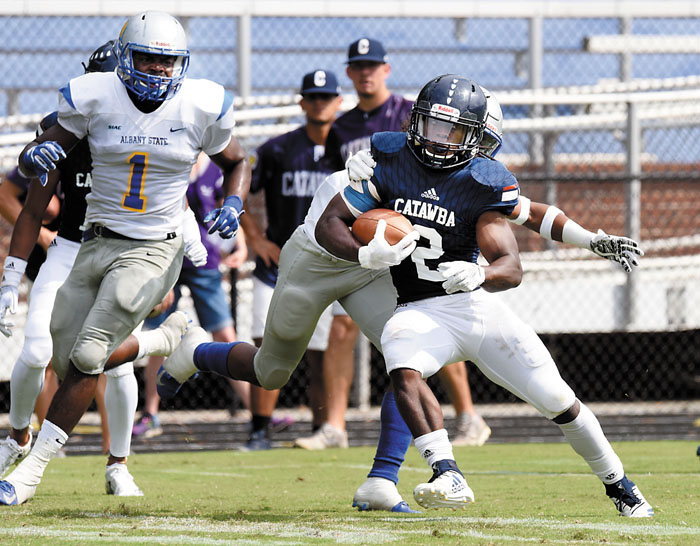 Wayne Hinshaw file photo/for the Salisbury Post ... Catawba’s Kenyatta Greene (2), shown in an earlier game this season against Albany State, had a big punt return for a touchdown during the Indians’ 34-point fourth quarter, Saturday against Tusculum.

The Indians, winless since Sept. 8, scored five touchdowns in the final period Saturday at Shuford Stadium— including three in the last four minutes — and rallied for a breathless, 55-37 SAC victory over Tusculum.

“I told them I was going to act like I’m 22-years old today,” coach Curtis Walker beamed, a smile pasted across his face, after Catawba (2-5, 1-3) broke a four-game losing streak. “I wanted to show them some energy. I mean, how do you motivate a 1-5 team? That’s what I’ve thought about all week. That’s what I knew we had to do — find ways to motivate a 1-5 team.”

Catawba found them in five separate gift-wrapped packages in the fourth quarter, when it surged back from a 30-21 deficit. The Indians scored touchdowns on a passing play, a running play, a punt return, a fumble return and an interception return — sending Tusculum (4-3, 3-2) to a soul-crushing defeat.

“It was the biggest meltdown in the history of the world,” losing coach Jerry Odom barked, after the Pioneers coughed up a 23-7 halftime advantage. “We gave up silly plays. We got some penalties that kept drives going. I don’t know what to tell you other than it is what it is.”

Catawba’s outburst thrilled the lively, homecoming day crowd and may have set team records. The 55 points was the most the Indians have scored in a game since last October’s 45-28 victory at Limestone. Quarterback Ken Avent, a redshirt freshman subbing for injured incumbent Reid Carlton, said Catawba needed to vent some frustration — and Tusculum was there to help.

“It was just a buildup from the whole season,” he said after passing for a touchdown and rushing for two others. “A lot of things have gone wrong. Finally, after four weeks of losing, it was great to get a win today.”

Avent’s performance was pivotal. He busted a 41-yard, straight-down-Broadway run on the first play of the second half, advancing Catawba to the Tusculum 30-yard line. Five snaps later, he feathered a 12-yard TD pass to Jourdan Osinskie on a well-conceived slant pattern.

Then, following a defensive three-and-out, Avent capped a nine-play drive with a 1-yard burst into the end zone that trimmed Tusculum’s lead to 23-21. The Pioneers were assessed two costly penalties inside their own 10-yard line — a late hit out-of-bounds on Avent and a rare, hands-to-the-face call that moved the ball from the nine to the four. “Hands-to-the-face?” Odom questioned. “I’m not saying we didn’t do it, but that was a weird call.”

Regardless, the Indians had discovered a pulse following a three-turnover first half.

“All we talked about at halftime is how we were still in this game,” Walker said. “We just had to find a way to win. We did it today by taking care of business in the second half. The offense scored, the defense got a stop, the offense scored again. Right then, they started believing in themselves.”

Catawba drew within 30-28 as the head-turning fourth quarter unspooled when freshman Nasjzae Bryant scored his first touchdown on a 5-yard run with 13:50 remaining. Four minutes later, Kenyatta Greene settled under a Tusculum punt, juked a defender  and raced 71 yards for a score that gave the Indians their first lead.

“I basically peaked out and decided if I was going to fair catch it or not,” said Greene, who contributed 254 all-purpose yards — 42 rushing, 86 receiving, 55 on kick returns and the 71-yard punt return. “But I had it in my head that I wanted a runback. I had to make a man or two miss and after that, I saw nothing but open field.”

The guests reclaimed the lead with 6:42 remaining on an 18-yard Tommy Pistone TD pass to wideout Brian Burnett, then forced a Catawba punt with 4:53 on the clock. But disaster struck on second down when an attempted handoff to Aaron Fudge on a reverse play was muffed in the backfield. The ball was confiscated by Catawba’s Jeremy Addison, who pranced 16 yards into the end zone with four minutes to play.

“I was the outside defender,” said Addison, a senior DB who also picked off a pass. “They ran a jet sweep toward me and all I did was read my keys. I saw a chance to shoot and got the ball on the ground. When I scored I looked over both shoulders and held the ball in the air. Had to make it look good.”

It looked even better when teammate Chris Thompson intercepted a pass and returned it 42 yards for a touchdown with 2:07 to go — providing a 48-37 Catawba lead. Greene added a rub-it-in TD on a 33-yard sprint in the waning seconds.

“All I remember is Coach telling me I needed to make a play,” said Thompson. “On the pick, I made my outside zone drop for the first time and the quarterback threw it right to me.”

And with it, after weeks of despair, came a new sense of purpose for the Indians.

“We’ve put that 1-5 season behind us,” said Walker. “This is our second season. Yeah, we’ve had a lousy start, but if we finish strong, that’s what we’ll remember. We won’t even think about those first six games.”

NOTES: Catawba’s 1988 SAC championship team — including Walker and fellow linebacker Rodney Goodine — was recognized after the third quarter. … Tusculum finished with 409 total yards (140 in the second half) and Catawba with 308. …  Greene’s punt return for a touchdown was the Catawba’s first since 2002, when Cedric Squirewell scored on a 55-yard runback at Mars Hill. … Catawba’s defense forced five turnovers. Mike Miller, Cameron Davis and L.J. Melvin each had 10 tackles for the Indians. Davis, a junior defensive end, added two sacks. … the 55 points were the most scored by Catawba since 2010, a 59-8 win over Livingstone.

High school football: Five turnovers too much for Cavs…