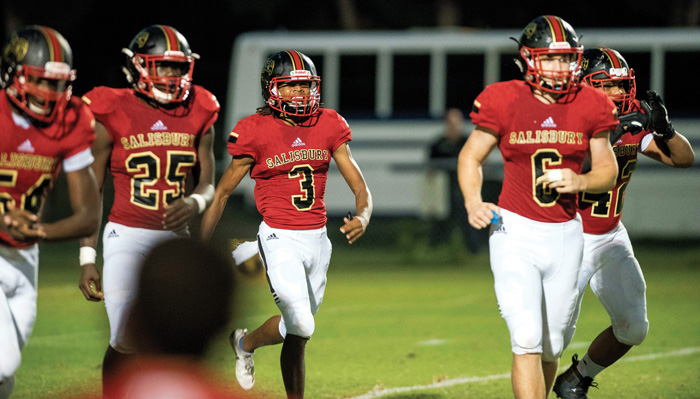 THOMASVILLE — Sophomore Mike McLean accounted for four touchdowns (two rushing, two passing) and Salisbury managed to win at East Davidson, 35-23, on Friday to stay in the race in the Central Carolina Conference.

East Davidson (2-7, 2-5 CCC) was on a normal schedule, while Salisbury was playing its second game of the week after falling to Ledford, 18-10, in a bruising makeup contest on Monday.

“Our coaches are out of their routine and kids are out of their normal routine right now and, on top of that, we had a very physical game on Monday,” SHS coach Brian Hinson said. “So this wasn’t easy. We knew it wouldn’t be.”

With the Hornets (5-3, 5-1 CCC) down in the second quarter, 10-7, McLean threw his second touchdown pass. This one went to Jamarie McCollough, covered 35 yards, and gave the Hornets a 14-10 lead at halftime.

Salisbury took advantage of a short punt by East Davidson in the third quarter and opened up a 21-10 lead when Jabril Norman scored on a 12-yard run.

The Golden Eagles fought back to 21-17 with a pass play.

Salisbury’s last two touchdowns came on long runs by McLean, a standout varsity running back as a freshman who has quarterbacked the team this season.

“We had some running backs get injured, so we put Mike at running back and put Vance Honeycutt in at quarterback,” Hinson said. “Mike broke a couple of big ones to help us hold them off.”

East Davidson had closed within 28-23 before McLean’s final TD run.

Tyrone Johnson picked off two passes for the Hornets. Donovan Corpening also had an interception.

Hinson would like to see a return to normal, but he expects next week to be a little crazy as well. The Hornets will be playing jayvee games on Monday and Thursday.

Salisbury hosts powerhouse North Davidson next Friday, and will finish the regular season with CCC contests against South Rowan and Oak Grove, which gave Ledford a tough time last night for three quarters.