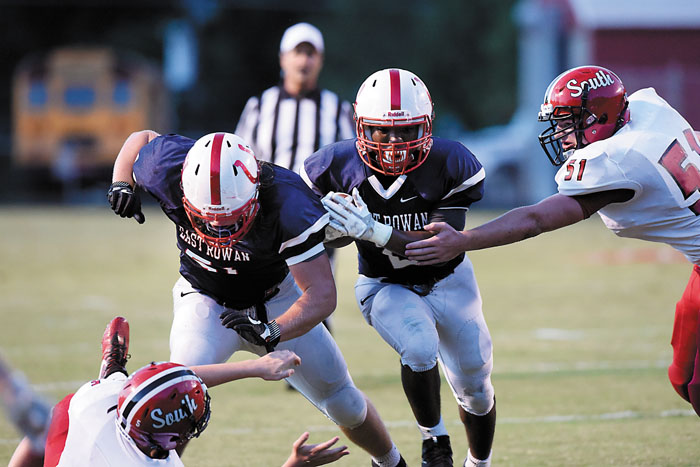 GRANITE QUARRY — The East Rowan Mustangs picked a most opportune time to post a signature win.

Pushing all the right buttons on both sides of the ball all night, East made it look easy in a 24-7 win over visiting South Iredell.

“It was definitely a complete game effort from everybody — offense, defense and special teams,” head coach John Fitz said. “It makes you feel good as a coach when you talk about things all week and the players buy into it and execute.”

With the win, the Mustangs (5-4, 2-1 North Piedmont Conference) are now part of a four-way logjam for first place in the conference, with just two games remaining in the regular season. The Vikings fell to 4-5 and 2-1, joining a group at the top of the standings that also includes Statesville and West Rowan.

Sophomore Sammy Pinckney ran for 205 yards on 34 carries to lead the offensive effort while quarterback Logan Forbis passed for 138 yards and a pair of long TD passes to Sam Wall and Gabe Hinceman. The workhorse effort by Pinckney boosted him to 1,065 yards for the season.

“I am just trying my best to help my team,” said the humble Pinckney, after the game, as he showed no signs of weariness despite his heavy workload. “I am always ready for the next play and the offensive line was doing some damage out there tonight.”

Teammate Sam Wall was not as low key in describing the performance by Pinckney. “He is a dawg, he is our hero and I love him,” said Wall, who had his own big night with a 67-yard TD catch on the first play of the second quarter, putting East on the scoreboard first.

Despite the offensive efforts of Pinckney, Forbis, Wall, Hinceman and Christian Bennett, the real stars of the night in this significant win were on the defensive side of the ball. The Mustangs harassed the Vikings all night with three sacks, a lot of blitzing pressure, two interceptions and a fumble recovery. They also stopped South Iredell on downs three times, twice in the second half.

“I was hyped up just to play,” said towering defensive end Elton Hooper, who was in on all three sacks and drove Vikings quarterback Holland Dowdy crazy all night with his pressure. “We’ve got our mojo back and everybody was ready to play.”

Hinceman, a safety on defense, notched a clinching interception of Dowdy late in the game. “It was a short week for us (after a win at Carson on Monday) but we started preparing for this game right away and put in a lot of blitzes that really worked out for us tonight,” said Hinceman.

Coach Fitz confirmed the new wrinkle to the Mustangs’ defense with the pressure defensive effort. “We saw they (South) have a lot of trouble with pressure and we have not been pressuring that much this year,” Fitz said. “But we did it quite a bit tonight and kept doing it because it was working.”

Hooper, linebacker Stephen Deutsch and Bennett made big plays all night to go with the picks by Hinceman in the second half and another by Wall late in the first half — in the end zone to halt a scoring threat. Dominic Dale, a reserve called up from the junior varsity, pounced on a Vikings fumble in the third quarter to halt another drive.

Both teams were coming off Monday night games earlier in the week, due to problems from the recent hurricane. South Iredell edged West Rowan in double overtime while East held off Carson, 28-21.

The Vikings took the opening kickoff and seemed to be on a roll as they quickly drove down to the East 25-yard line. But a penalty and then a sack of Dowdy by Bryce Carden pushed the visitors back and set the stage for a fourth-down stop at the 23-yard line.

East broke the scoreless deadlock on the first play of the second quarter when the speedy Wall broke away from two defenders and pulled in a perfect pass from Forbis for the 67-yard scoring strike. A two-point conversion failed and East led, 6-0.

South responded with a no-huddle attack that produced a 55-yard scoring drive in eight plays. Dowdy completed passes to Altereck Adams and Darius Smyre to put the ball at the East 20. On the next play, the Vikings got what would be their only score of the game, but not without some controversy. Dowdy hit Cullen Smith streaking across the end zone but the officials originally ruled he was juggling the ball as he went out of bounds. After a conference, however, the call was changed to a touchdown at 9:31 of the second period. The extra point gave South a 7-6 lead.

Wall’s interception in the end zone on a long pass play set East off on an 80-yard drive as the first half wound down. Seven runs by Pinckney and a roughing the passer call put East into the red zone. With time ticking down, however, the Mustangs settled for a 26-yard Hinceman field goal with 0:01 left, for a 9-7 lead.

The lead quickly expanded when the second half opened as Pinckney broke a 26-yard run to midfield. Two plays later, Forbis started right, then whirled around and threw back to Hinceman, wide open near the 35-yard line to produce a 46-yard scoring pass. Bennett punched in the two point conversion run to put East up, 17-7,  at 10:16 of the third period.

The contest settled into a defensive battle as East stopped the Vikings twice more on downs.  The last one came in the fourth quarter at midfield as Dowdy’s pass was knocked away. From there, the Mustangs went to a clock-eating ground attack behind Pinckney and Bennett, putting together a game-clinching scoring drive.

Twice in the 49-yard drive, the Mustangs converted on fourth-and-short. The last conversion came on 4th-and-2 at the 4-yard line, when Bennett pushed through for a first-and-goal.

Bennett scored on the next play, with just 3:43 left, as the margin reached 24-7. South made a strong push to respond as Dowdy hit a pair of long passes to Justin Turner down to the East 23. But Hinceman came up with his clinching interception at the 10-yard line and returned it to the 43.

The Mustangs will be at home for Senior Night next Friday as they face a strong Statesville team with a possible league title on the line.

“We don’t really talk about championships a lot,” Fitz said. “We usually just talk about one play at a time. But we realize we have an opportunity to win this thing and our players believe we can.”