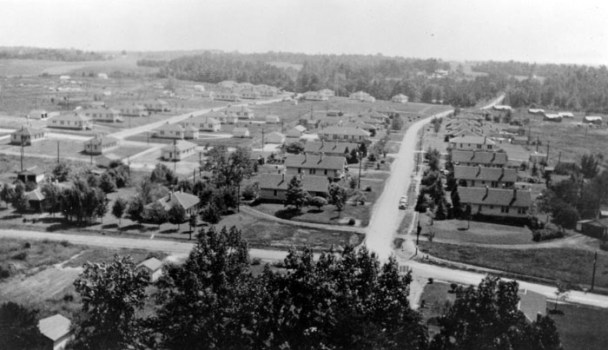 Duke Energy's Buck Steam Station was demolished Friday, ending an era for people who worked at the company for years. Photo courtesy of Duke Energy Archives 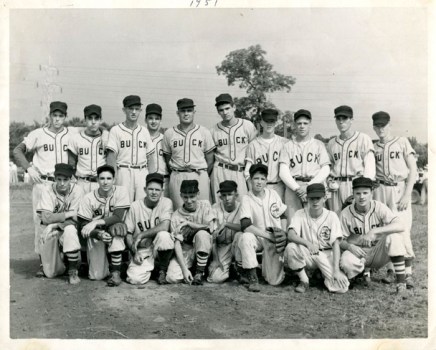 The final buildings at Duke Energy’s Buck Steam Station were demolished Friday, and a way of life came to an end.

The plant was named for James Buchanon “Buck” Duke, who with his brother founded Duke Energy. The plant was built in 1926.

In a timeline we can only dream of today, Southern Power decided to build Buck in January 1926. The foundation was poured on Feb. 4, 1926.

The two units grew from concept to full production in only 10 months.

Buck was the most modern power plant in the South, and Southern Power was a leader in using pulverized coal to generate steam-based electricity.

Buck, however, was not just a power plant. It was a way of life.

The first workers had a short commute. Duke built Dukeville just after the first power units were completed.

A village of homes adjacent to the plant, Dukeville began with 26 houses but later grew to 85. A community center provided by the company hosted meetings, parties and reunions for residents.

This model was borrowed from textile mill villages, which at the time were Duke’s largest power customers.

The workers who lived in Dukeville paid rent and received a subsidy in their paychecks to ensure their rent was covered.

Duke provided coal for the heating stoves as well as water in two forms: nonpotable river water for gardens and drinking water for the home. Rent was based on the size of the house.

Duke maintained the homes, keeping up repairs and painting as needed. Because the inhabitants were co-workers as well as neighbors, they all knew each other, and their kids played together.

Buck maintenance technician Leo Walton, Jr. was born in Dukeville. He has worked for Duke for 49 years now; his dad and both grandfathers worked for the company.

Leo fondly remembers playing on the coal pile “many a time” and going to the community center to play basketball or shuffleboard. Kids could use their skates in the basement.

“All of us kids were like one big family,” Walton says. “If someone needed something, everybody helped out.”

He recalls that when his dad developed a brain tumor, the plant took up a collection to help out, not once but twice.

By the 1950s, the village concept faded out and Duke encouraged employees to own homes rather than renting them. Those employees who rented the houses got the first opportunity to buy them.

Buck also had a baseball team, and the rumor was if you wanted a job at Buck, it helped to have a good arm.

Holmes played golf for Buck, as well. Duke hosted Fossil Production golf tournaments, and Holmes played in many of them.

“We played with VPs and all. When we played sports, nobody minded what your work position was. We just all played together,” he said.

Holmes said that playing sports together helped in the work environment.

“The plant manager and assistant plant manager played, too. Sometimes we played with them as partners. It helped us know more about each other and it helped communication,” he said.

Walton’s grandfather was an umpire for baseball games and he remembers them well. Walton also recalls the Buck Little League team.

“Buck started a Little League team in Spencer. The plant took up money and got uniforms so the boys could all play,” he said. “We had brand new uniforms. We only won one game that year, but we sure looked good.”

Buck Steam Station was built in an era of ornamentation, and the construction included fancy brackets on stairways and moldings in concrete walls. Holmes remembers how clean the staff kept the plant.

“Back in the day, they had terrazzo tile for flooring,” he said. “The grating was ornamental. When the floor was cleaned it shined like glass. The turbines had to be kept clean. They mopped it and kept it clean.”

Walton’s maternal grandfather, Lawrence W. Potter, started at Buck when it came on line in 1926. Potter and his family arrived on the train from Cowpens, South Carolina. His manager met them at the train station and took them to their new home.

Potter was on the team that fired up Unit 1 for the first time.

His paternal grandfather worked at Buck as well. Walton’s dad started at Buck in 1940 at the prep house working with raw coal, making 16 cents an hour. He worked for the company for 35 years.

Holmes made history in 1993 when he became the first African-American shift supervisor at Buck Steam Station.

“Now that it’s going away, we can say I was the only black shift supervisor,” he chuckles.

Walton reflects on the changes he’s observed at Duke over his 49 years.

“I’ve seen lots of changes in my career. Safety is the biggest change I’ve seen, and environmental. Things are much safer today and we are much more aware of the environment.”

Holmes cherishes his memories of working at Buck.

“It was good pay; I was close to home; I enjoyed working with the people I worked with,” he said. “We had some good teams. We really worked well together, got along well. We were a tight-knit group.”

Walton’s family ties to the company are deeply embedded in his psyche.

“I think Daddy and Granddaddy would say it’s time to go and make way for the new — what’s good for the company. Both of them thought the world of Duke,” he said.