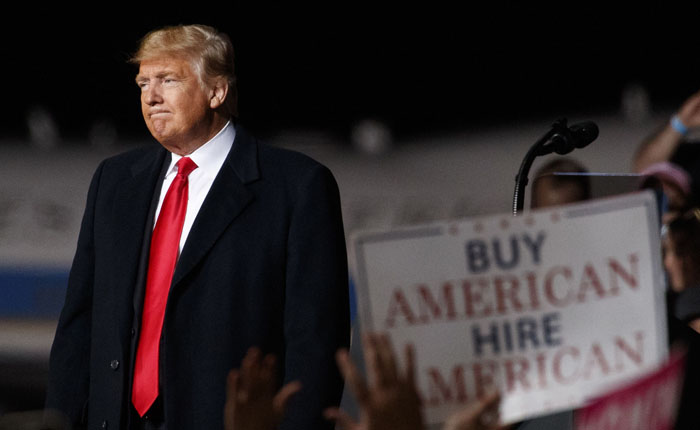 “It’s the economy, stupid.” Since that phrase was coined during Bill Clinton’s 1992 campaign, 26 years ago, it’s become a well-worn cliche in American politics. And for good reason.

Issues like North Korea or immigration are abstractions for many; jobs and prices affect voters every day. But this year, that adage has clearly lost some of its power, particularly with educated women.

Control of Congress could hinge on the ability of Republicans to convince those women that Clinton’s old message holds true. By every measure — low unemployment, manageable inflation, healthy stock prices — the economy is doing very well.

Yet in the latest ABC/Washington Post poll, voters favor Democratic House candidates over Republicans by an 11-point margin, 53 to 42.

President Trump’s favorable rating has crept upward from 36 to 41 percent since August, but that’s still a historic low. No president has faced his first midterm election with a worse rating since Harry Truman in 1946, and his party lost 54 House seats that year.

Democrats only need a net gain of 23 seats to retake the majority.

What explains this contradiction? History, in part. A new president’s party almost always loses seats two years after a victory. An exciting candidate like Ronald Reagan or Barack Obama at the top of the ticket energizes marginal voters in presidential elections, who simply don’t show up at midterms.

But that’s not the whole picture this year. A distinct trend seems to be emerging: Women are far less influenced by Trump’s economic performance than their male relatives. Instead, they are more focused on the president’s personal failings, impulsiveness and instability, which threaten their well-being and cloud their children’s future.

Patrick Murray, the poll’s director, identified the reason for this disparity in The New York Times: “The normal set of political concerns for men are which party is going to give me lower taxes and less regulation. Whereas white college-educated women are saying, ‘I will do fine economically, but I am really worried about the tone of the Trump presidency. I’m worried about the direction this country is going.’”

There’s a second factor sapping support for Trump’s economic record: His imposition of tariffs on $250 billion worth of Chinese goods has deeply alarmed some of his natural allies in the business community, starting with the manufacturing sector.

The Wall Street Journal cited JL Audio, a maker of sound equipment in Florida, which now must pay a 25 percent duty on key parts imported from China.

“It’s hard to build things here,” the company’s vice president, Manville Smith, explained. “It would be nice if our government would help us, not hurt us.”

Similar discontent is rippling through the Farm Belt, since China has imposed retaliatory tariffs on U.S. agricultural products like soybeans and pork, causing American producers to lose markets and customers.

But the major threat to Republicans this fall is the yawning gender gap. As the Times reported from the suburbs of Columbus, Ohio, Trump and his allies are doing well with many male voters, who focus on economic issues and provide a “potential bulwark” against female discontent.

“One reason for their continued support now: White college-educated men have benefitted unequally in the Trump economy,” said the Times.

They quoted J.D. Kaplan, who runs a graphics business, about the president: “He’s tough, he’s a bully, but boy, things are getting done.”

On the other side of the gender gap, however, many women voters say Trump’s outlandish behavior outweighs his economic record. In the latest ABC/Washington Post survey, women favored Democratic candidates this fall by 22 points, 59 to 37. Among women who called themselves political independents, the margin was an astounding 62 to 29.

Lyn Ragsdale, a political scientist at Rice University who studies presidential voting patterns, told the Boston Globe that Trump has shattered “the typical connection between a strong economy and a president’s approval ratings.”

“People are so negative on his honesty, leadership qualities, level-headedness and key values that he does not get a halo effect from the economy that other presidents have received,” she explained.

So which image of Trump will be more powerful next month? The brilliant businessman males admire, or the boorish bully females fear?

The answer could well determine the election, which is still up for grabs.