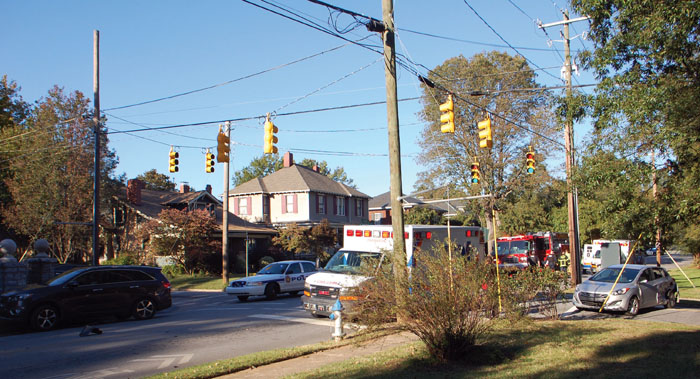 Salisbury police responded to a three-car accident and five reported injuries late Friday afternoon at the corner of South Fulton and West Monroe streets. One of the cars involved was the silver Hyundai Elantra at right. Mark Wineka/Salisbury Post

SALISBURY — The Salisbury Police Department is investigating a three-car accident Friday afternoon at South Fulton and West Monroe streets that reportedly injured five people, including two children in one vehicle.

A girl was thrown from the car in which she was a passenger. A witness who helped the child said she was responsive before going to the hospital by ambulance.

The cars involved were a Chevy Impala, an Audi sedan and a Hyundai Elantra, in which the children were riding.

The same witness said the Impala ran the traffic light while going south on Fulton Street and hit the Elantra, which was traveling on Monroe and passing through the intersection.

The Impala then struck the Audi, witnesses said, but police have not released a report.