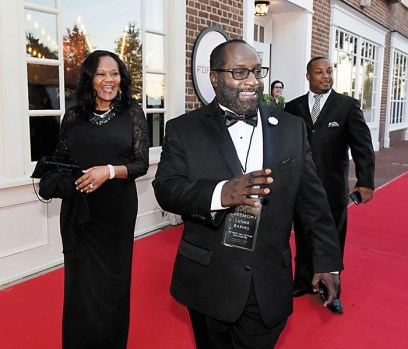 Honoree Luther Barnes and his wife, Pamela, walk the red carpet to the Gem Theatre. Wayne Hinshaw/for the Salisbury Post 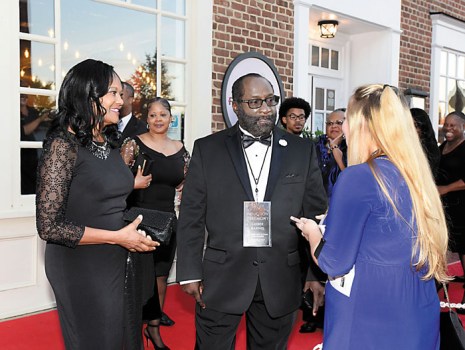 Luther Barnes and his wife, Pamela, pause for an interview. Wayne Hinshaw/for the Salisbury Post 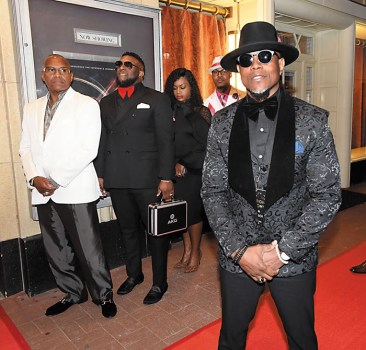 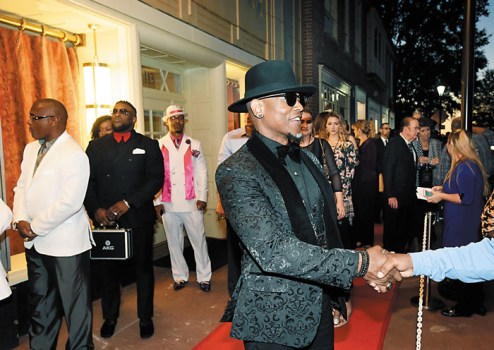 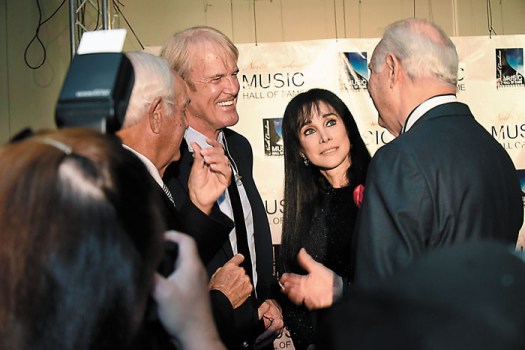 John Tesh and his wife, Connie Sellecca, speak to fans at the reception. Wayne Hinshaw/for the Salisbury Post 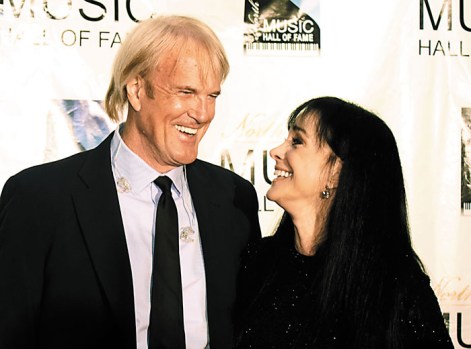 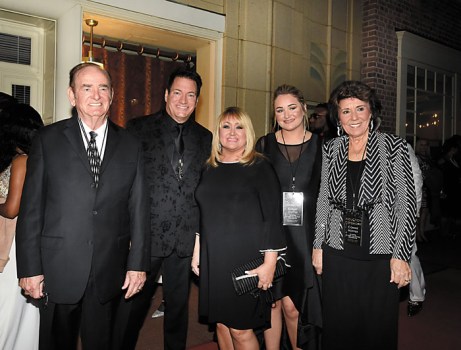 Gospel group The Hoppers pause for a photo. From left are Caude, Dean, Kim, Karlye, and Connie Hopper. Wayne Hinshaw/for the Salisbury Post 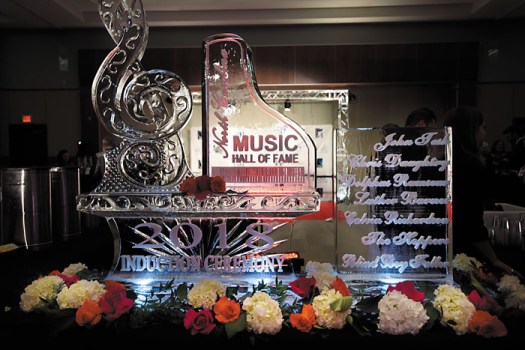 The centerpiece at the entrance to the NC Music Hall of Fame VIP reception was an ice sculpture. Wayne Hinshaw/for the Salisbury Post 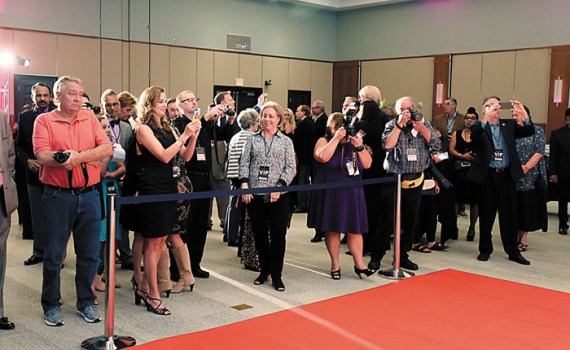 Music fans and VIP guests take photos of the honorees at the awards reception. Wayne Hinshaw/for the Salisbury Post 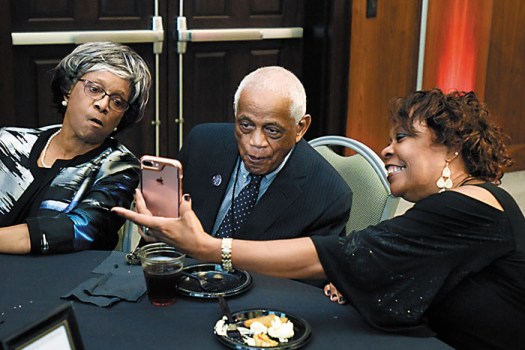 Eddie Ray, 92, is credited with coming up with the idea for the N.C. Music Hall of Fame. Wayne Hinshaw/for the Salisbury Post 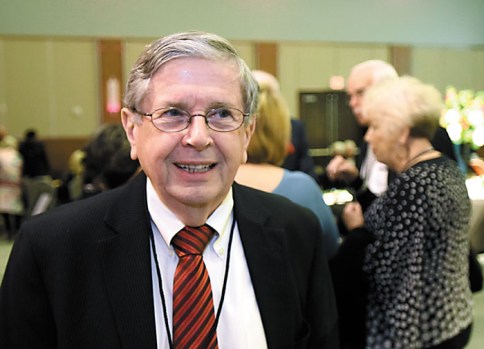 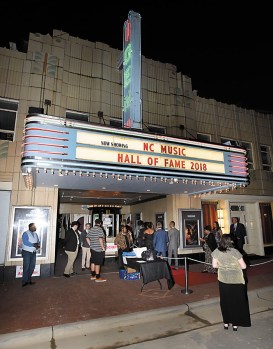 The Gem Theatre lights up the night. Wayne Hinshaw/for the Salisbury Post

This was the 10th annual ceremony. Former honorees include Fantasia Barrino, Andy Griffith and Randy Travis.

The reception was held at Kannapolis City Hall and, if a city hall can be glamorous, it certainly was. Food and wine were served next to a massive ice sculpture with the inductees’ names etched on it.

As each inductee entered the venue, his name was announced and guests had the opportunity to pose with him for photos.

Mayor Darrell Hinnant said he was pleased to be present.

“We’ve had nine annual events and inducted all kinds of talent,” Hinnant said. “Some names you know, some names you don’t. They’re the names behind the faces. We’ve recognized all genres — jazz, rock, rockabilly — but all the inductees are from North Carolina, and we are happy to honor them.

“Mike and Linda Curb with Curb Records have supported the (Hall of Fame) since it was started here,” the mayor said. “I’m so excited that they support this community, and I’m excited for North Carolina to have produced so many epic musicians.”

The induction ceremony was held at the Gem Theatre.

John Tesh was nostalgic in his celebration of the evening.

“It’s an honor but it’s bittersweet, as my parents aren’t here to see this,” Tesh said. “My mom spent so much time on me, making sure I didn’t get up from the piano. This would be a very proud moment for her.”

Tesh was born in Rural Hall, just north of Winston-Salem.

Dolph Ramseur is a record executive and founder of Ramseur Records, an independent label based in the state. He’s responsible for such successful artists as the Avett Brothers and Steep Canyon Rangers. He was born and raised in Concord.

“I’m very honored,” Ramseur said. “Of course, I consider N.C. the center of the universe, so this means a lot. The greatest gift North Carolina gave the world is music, and that’s a good thing. I’ve played a small part, and I’m very grateful.”

The Hoppers are Gospel Music Hall of Fame members from Madison. The family has sung to audiences around the world for 60 years, performing for presidents and in Carnegie Hall as well as small churches.

Karlye Hopper spoke for her family.

The Hoppers are from Greensboro. Having just finished a 12-day tour, they flew in for the induction.

Calvin Richardson is an R&B and soul singer and songwriter from Monroe. He has been nominated multiple times for Grammy Awards.

“I’m very excited,” Richardson said. “This was not on my radar. I wasn’t expecting it at all. I’ve worked a long time, and I appreciate being recognized.”

Luther Barnes is a gospel singer who’s also been nominated for a Grammy Award.

“This is awesome,” Barnes said. “I have been recognized in other areas, but to be recognized at home means so much.”

Barnes is a pastor in Rocky Mount, his hometown.

Blind Boy Fuller, who was born in Wadesboro, was famed for his fingerpicking style on the guitar. Fuller died in 1941.

Also honored was 92-year old Eddie Ray, whose vision helped begin the N.C. Music Hall of Fame. He served as operations director and on the board of directors for the organization until he retired earlier this year.

During his music career, Ray was an executive at major record labels, including Imperial, Capitol, Decca and MGM. He covered artists as diverse as Fats Domino and Pink Floyd.

Chris Daughtry, a finalist on the fifth season of “American Idol,” was unable to attend.

The North Carolina Music Hall of Fame is at 600 Dale Earnhardt Blvd. in Kannapolis. It is open from 10 a.m. to 4 p.m. Monday through Friday, but closed for the noon hour. Admission is free, but donations are welcome.