Larry Efird: A long time ago, only yesterday 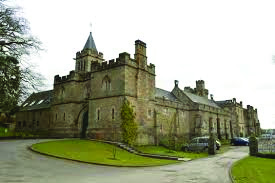 A stint at Capernwray Bible School in North Lancashire, England, 40 years ago provided the lifelong lessons and lifelong friends.

Forty-two years. That’s how long ago I was a student at the Capernwray Bible School in Carnforth, N. Lancashire, England, in 1975-1976. I went during my junior year in college.

Two short years after I returned home to the United States, I was a first-year teacher. Studying in England was a defining moment in my life, especially affecting why I would teach — and how.

Maybe it was because that was the first time I would be immersed in a culture other than my home country and I was able to see the world from a broader perspective. Maybe it was because I shared a room with 12 other guys from at least six different countries, and we all had our own definitions of what “home” looked like. But most likely, it was because we were able to learn from some of the best teachers who have ever lived.

They challenged us to learn our lessons as if our very lives depended upon them. I was actually afraid of one of them because he was the type of teacher who could see right through you, almost as if he were looking at your soul. And I definitely didn’t want anyone poking around in there .

This was intimidating because Americans are experts at keeping our guards up so no one will know the real us. For some reason it’s in our DNA to present our best selves as if we have no tangible struggles or vulnerabilities. We only want to look like the picture of success so that’s what we spend our time portraying and guarding.

Good teachers know better. They help those under their tutelage be themselves but help them to safely see who they are in a context of vulnerability. Our teachers in that English country school that resembled something off the set of Downton Abbey taught those of us who were internationals that our fears of entering adulthood could serve us well if we would take the time to know who we really were and not accept a plastic version of our humanity.

A few weeks ago, two grown men from that epoch of my life surprisingly showed up at my classroom only minutes before 33 energetic sophomores would arrive, who often wonder, “Are we going to do anything fun today?” Usually, a teacher’s definition of “fun” when compared to a student’s is vastly different. On that particular Friday, however, my “fun” was just beginning .

Randy flew in from Phoenix, Arizona, and Scott, the mastermind of the plot, came from Lincoln, Nebraska. When I fully recognized who these men were standing in front of me, 42 years melted away on the inside, and I mystically felt like a 20-year-old again. These former schoolmates had secretly been planning for six months (along with my wife) to surprise me at school and then enjoy a weekend reunion in my hometown. It came close to leaving me speechless, and no student I’ve ever had would comprehend how that could possibly happen.

The next morning while we were eating breakfast at Cracker Barrel, two more classmates appeared. Stan had traveled from Minneapolis, Minnesota, and Dave from Baton Rouge, Louisiana. Having recovered from the surprise of the first two long lost friends barely 24 hours before, I was once again overcome by seeing yet two more friends appear out of nowhere.

What did five, 60-something-year-old men talk about after 42 years of not having seen one another? We talked about our teachers and what we learned from them and how very grateful we are that we had one year to learn not only a curriculum but also about life. We compared notes on our varied careers and families, of course, along with realizing how much the world we came to see four decades ago has changed.

As I looked around the table, I realized how much each of us had changed as well. But at least we had known how to interpret the world — and ourselves — through all of those changes. If any of my own students happen to have a similar experience 42 years from now, I hope they will feel the same way I did. If so, I will have done my job.