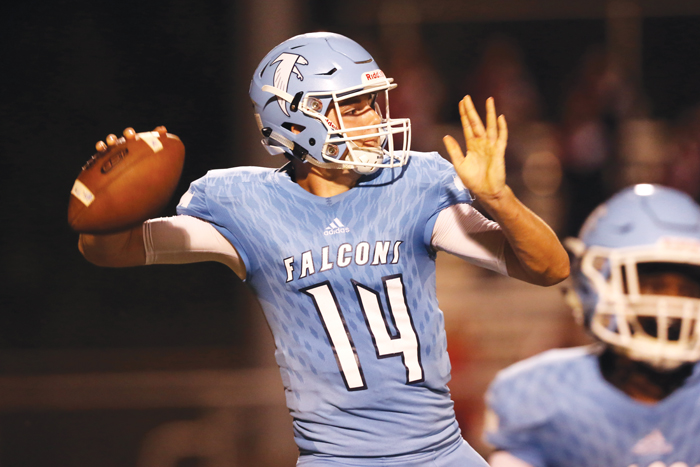 The Friday picks turned into the Friday/Saturday/Monday picks after Hurricane Michael slashed through.

That’s my excuse for a dismal 3-3 week, one of the worst ever, and dragging the season record down to 34-13.

Picked to win a tossup game, West Rowan lost a healthy lead on Monday and lost in two overtimes at South Iredell. Picked to win, Carson lost at home in the fourth quarter to East Rowan in a game that came down to the final play. East had lost four games in a row and had lost five years in a row to Carson, but it’s the unpredictability that makes this stuff fun.

A.L. Brown also lost — at home — to Cox Mill. That was the result that surprised me most.

On back-to-back weeks, the Wonders have lost to two county/conference rivals they’d never lost to. Not ever.

A.L. Brown has curious numbers. The Wonders are 4-4 even though they’ve outscored their opposition by 102 points. That’s not normal. Most 4-4 teams have numbers like West Rowan (minus-21 scoring differential), South Iredell (minus-19) or East Rowan (plus-3).

The Wonders are a potent team that has been hurt by critical turnovers. They haven’t been lucky, and they’ve lost three games that they could’ve won if they’d made one more play. They’ve also played a demanding schedule.  When you play in a Cabarrus County league, you automatically play a demanding schedule.

My thinking is that the Wonders will right the ship, that the breaks will even out and that they won’t experience the school’s first losing season since 1977. I’m sure no one is going to want to draw them as a playoff opponent. This is a scary team that sacks quarterbacks and has a thunderous, balanced offense. A.L. Brown scores 32 points per game and averages 400-plus yards per game. Those are numbers that usually get you to 7-1, not 4-4.

A.L. Brown  has lost to tonight’s opponent, Northwest Cabarrus, before, but not often and not in a long time. The Trojans haven’t beaten the Wonders since 1976. Disco and leisure suits were big then.  So were the Cincinnati Reds.

Way down just two years ago, Northwest (8-0, 2-0 SPC) is on a serious roll, has cracked the top-10 poll in 3A and is undefeated, and while I don’t have a Northwest record book in front of me, I’m certain this is the first time the Trojans have been 8-0 since 2005 when they lost to West Rowan in Mount Ulla in a memorable clash of two 8-0 squads.

Northwest has outscored opponents, 319-90, and  is playing so efficiently and confidently that it has to be favored tonight, even at Memorial Stadium. Just don’t be stunned if the Wonders suddenly put it together.

With Salisbury losing to Ledford on Monday and West Rowan losing to South Iredell, North Rowan is the Rowan school with the best chance to win a league championship.

Whether or not the fifth-ranked Cavaliers can accomplish that mission is going to be determined by tonight’s Yadkin Valley Conference home game with sixth-ranked North Stanly. These teams appear to be head and shoulders above the rest of the league, and this looks like the game of the night statewide in 1A.  The losses for both teams have come against 3A opponents.

The Comets (6-2, 4-0 YVC) suffered a surprising loss to East Rowan to begin the season and had a 28-24 setback at Northwest Cabarrus that was actually pretty impressive considering what Northwest has done in recent weeks. In their wins, the Comets have destroyed people. They’ve outscored opponents, 329-75.

North Rowan’s defense has allowed seven points in its last five games. There’s also a lot to like about the Cavaliers’ balanced offense.

A win for West would be the 350th in school history.

There aren’t many routine picks tonight, but Salisbury is a heavy favorite, even on the road.

Despite a minus-100 scoring differential, East Davidson (2-6, 2-4 CCC) isn’t the worst team in the league and owns victories against West Davidson and Central Davidson.

Salisbury (4-3, 4-1 CCC) acquitted itself well despite losing to Ledford on Monday and the Hornets’ stout defense should be able to handle the Golden Eagles.

I’m tempted to take the Mustangs in an upset in Granite Quarry, but there’s still  that memory of South Iredell crushing East, 63-20, last season.

After two weeks, South Iredell (4-4, 2-0) is the only team with an unblemished record in the NPC. The Vikings won by a single point over Statesville and beat West Rowan in two overtimes.

East (4-4, 1-1 NPC) should be fired up, playing at home after a big win at Carson, and an East victory would turn the league into a free-for-all.

East can run the ball, but it will need big plays from QB Logan Forbis. Forbis’ two best games have coincided with East’s two best wins — vs. North Stanly and  Carson.

The Cougars had the Greyhounds on the ropes last year before losing, 34-30, in China Grove.

Statesville is 7-1 against Carson lifetime and hasn’t lost to the Cougars since 2009.

South (2-6, 2-4 CCC) has a chance to win at home, but the Raiders can’t turn it over like they did last week at Thomasville when they had six interceptions.

Lexington (4-4, 3-3) isn’t scary and has a points differential of minus-36, but the Yellow Jackets did pound a decent Oak Grove team that won at South.

Lexington has been pretty good on the road (3-2). Both of South’s wins have come at home.

The only time South beat Lexington was in the 1977 playoffs.

Nearly 20 years ago, just a bit later in the 1998 season, the Wonders battered the Trojans, 97-0, at Memorial Stadium, in a Halloween massacre that remains either famous or infamous, depending on which side of the stadium you sat on.

Northwest actually had a good team 20 years ago. It’s not like the Trojans were 0-11. But the Wonders had a great team. Among other things, there were a flurry of Nick Maddox touchdowns, an 80-yard QB sneak by a DB and a 100-yard pick-six. A.L. Brown also had a pass play in the second half that made it 60-something to nothing.  Tempers flared a bit.

I have no idea what’s going to happen tonight. I do know it won’t be 97-0. A loss would make the Wonders an unthinkable 0-3 in the SPC.

Glenn’s Bobcats won the first meeting of the schools last season, 35-17, putting up 500 yards of offense.

Glenn has a nice points differential of plus-71 and is the obvious favorite tonight.

Davie obviously has to pull off an upset if it’s going to make an impact on the CPC race.